The legitimate trade in commodities attracted a number of British merchants to the Niger River, as well as some men who had been formerly engaged in the slave trade but who now changed their line of wares. The large companies that subsequently opened depots in the delta cities and in Lagos were as ruthlessly competitive as the delta towns themselves and frequently used force to compel potential suppliers to agree to contracts and to meet their demands. To some extent, competition amongst these companies undermined their collective position vis-à-vis local merchants. 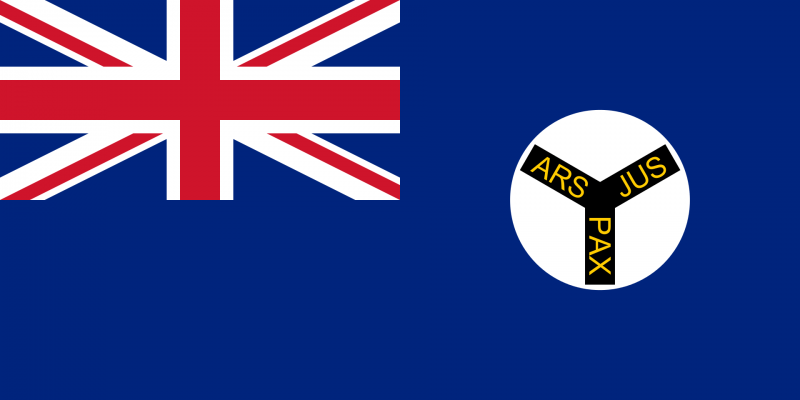 The Royal Niger Company established its headquarters far inland at Lokoja, which was the main trading port of the company, from where it began to assume responsibility for the administration of areas along the Niger and Benue rivers where it maintained depots. It oon gained a virtual monopoly over trade along the River.

The company interfered in the territory along the Niger and the Benue, sometimes becoming embroiled in serious conflicts when its British-led native constabulary intercepted slave raids or attempted to protect trade routes. The company negotiated treaties with Sokoto, Gwandu and Nupe that were interpreted as guaranteeing exclusive access to trade in return for the payment of annual tribute. Officials of the Sokoto Caliphate considered these treaties quite differently; from their perspective, the British were granted only extraterritorial rights that did not prevent similar arrangements with the Germans and the French and certainly did not surrender sovereignty.

Even before gaining its charter, the Company signed treaties with local leaders which granted it broad sovereign powers. One 1885 treaty read:

In consideration of the foregoing, the said National African Company (Limited) bind themselves not to interfere with any of the native laws or customs of the country, consistently with the maintenance of order and good government … [and] agree to pay native owners of land a reasonable amount for any portion they may require.

The said National African Company (Limited) bind themselves to protect the said King and Chiefs from the attacks of any neighbouring tribes (Ibid.).

The company considered itself the sole legitimate government of the area, with executive, legislative and judicial powers all subordinate to the rule of a council created by the company board of directors in London. The council was headed by a Governor. The Deputy Governor served as political administrator for company territory, and appointed three officials in Nigeria to carry out the work of administration. These were the Agent General, the Senior Judicial Officer, and the Commandant of the Constabulary. However, the company did accept that local kings could act as partners in governance and trade. It therefore hired native intermediaries who could conduct diplomacy, trade and intelligence work in the local area. 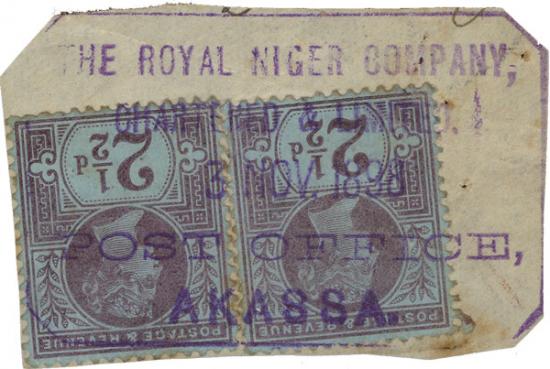 British stamps used in 1898 at Akassa by the Royal Niger Company.

The company, as was common among European businesses in Africa, paid its native workers in barter. At the turn of the century, top wages were four bags of salt (company retail price, 3s 9d) for a month of work. Trade was also conducted through a mechanism of barter and credit. Goods were made available on credit to African middlemen, who were expected to trade them at a pre-arranged price and deliver the proceeds to the company. The company’s major imports to the area included gin and low-quality firearms.

By the 1880s, the National African Company became the dominant commercial power, increasing from 19 to 39 stations between 1882 and 1893. In 1886, Taubman secured a royal charter and his company became the Royal Niger Company. The charter allowed the company to collect customs and make treaties with local leaders.

Under Goldie’s direction, the Royal Niger Company was instrumental in depriving France and Germany of access to the region. Consequently, he may well deserve the epithet of the “father of Nigeria”, which historians accorded him. He definitely laid the basis for British claims.

The Royal Niger Company had its own armed forces. This included a river fleet which it used for retaliatory attacks on uncooperative villages.

Britain’s imperialistic posture became more aggressive towards the end of the century. The appointment of Joseph Chamberlain as colonial secretary in 1895 especially marked a shift towards new territorial ambitions of the British Empire. Economically, local colonial administrators also pushed for the imposition of British colonial rule, believing that trade and taxation conducted in British pounds would prove far more lucrative than a barter trade which yielded only inconsistent customs duties.

This is a lesson from the tutorial, West-African Colonial Administration and you are encouraged to log in or register, so that you can track your progress.