To understand the features shared among different groups of viruses, a classification scheme is necessary. As most viruses are not thought to have evolved from a common ancestor, however, the methods that scientists use to classify living things are not very useful. Biologists have used several classification systems in the past, based on the morphology and genetics of the different viruses.

Past Systems of Classification 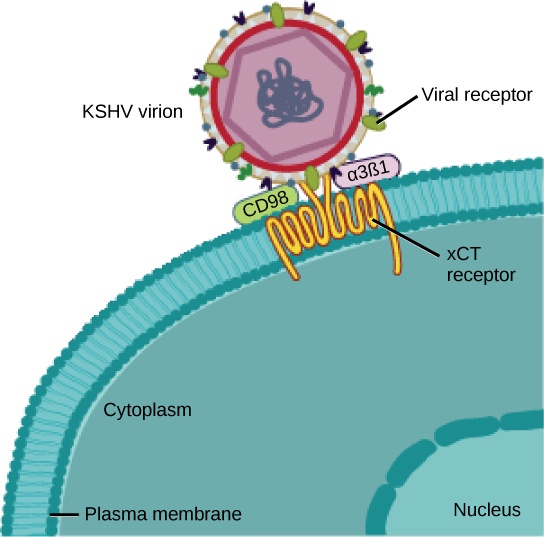 Viruses are classified in several ways: by factors such as their core content (see the table below and the figure above from Viral Morphology), the structure of their capsids, and whether they have an outer envelope. The type of genetic material (DNA or RNA) and its structure (single- or double-stranded, linear or circular, and segmented or non-segmented) are used to classify the virus core structures. 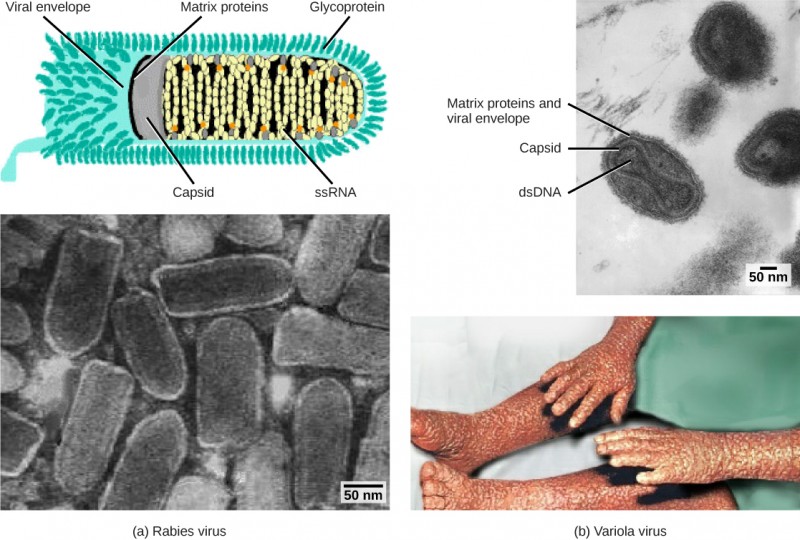 Viruses are classified based on their core genetic material and capsid design. (a) Rabies virus has a single-stranded RNA (ssRNA) core and an enveloped helical capsid, whereas (b) variola virus, the causative agent of smallpox, has a double-stranded DNA (dsDNA) core and a complex capsid. Rabies transmission occurs when saliva from an infected mammal enters a wound. The virus travels through neurons in the peripheral nervous system to the central nervous system where it impairs brain function, and then travels to other tissues. The virus can infect any mammal, and most die within weeks of infection. Smallpox is a human virus transmitted by inhalation of the variola virus, localized in the skin, mouth, and throat, which causes a characteristic rash. Before its eradication in 1979, infection resulted in a 30–35 percent mortality rate. (credit “rabies diagram”: modification of work by CDC; “rabies micrograph”: modification of work by Dr. Fred Murphy, CDC; credit “small pox micrograph”: modification of work by Dr. Fred Murphy, Sylvia Whitfield, CDC; credit “smallpox photo”: modification of work by CDC; scale-bar data from Matt Russell)

Viruses can also be classified by the design of their capsids (see this figure from Viral Morphology and the figure above). Capsids are classified as naked icosahedral, enveloped icosahedral, enveloped helical, naked helical, and complex (see this figure below and this figure below). The type of genetic material (DNA or RNA) and its structure (single- or double-stranded, linear or circular, and segmented or non-segmented) are used to classify the virus core structures (see the table below).

Adenovirus (left) is depicted with a double-stranded DNA genome enclosed in an icosahedral capsid that is 90–100 nm across. The virus, shown clustered in the micrograph (right), is transmitted orally and causes a variety of illnesses in vertebrates, including human eye and respiratory infections. (credit “adenovirus”: modification of work by Dr. Richard Feldmann, National Cancer Institute; credit “micrograph”: modification of work by Dr. G. William Gary, Jr., CDC; scale-bar data from Matt Russell) 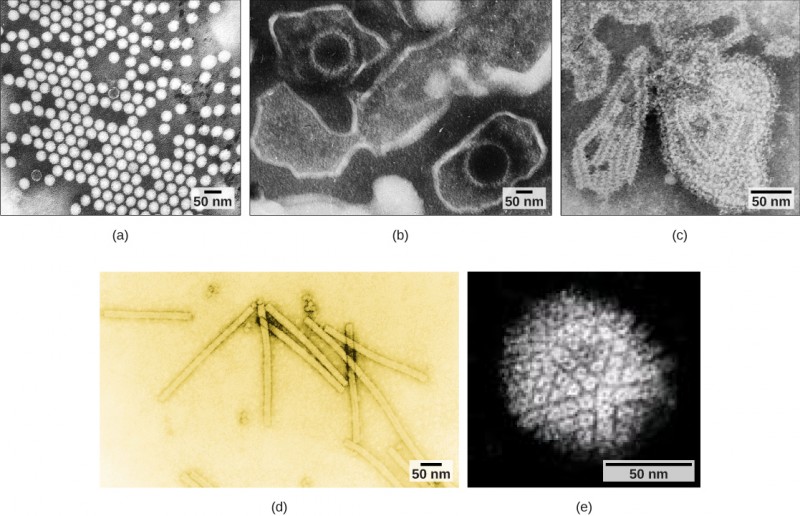 The most commonly used system of virus classification was developed by Nobel Prize-winning biologist David Baltimore in the early 1970s. In addition to the differences in morphology and genetics mentioned above, the Baltimore classification scheme groups viruses according to how the mRNA is produced during the replicative cycle of the virus.

Group V viruses contain ssRNA genomes with a negative polarity, meaning that their sequence is complementary to the mRNA. As with Group IV viruses, dsRNA intermediates are used to make copies of the genome and produce mRNA. In this case, the negative-stranded genome can be converted directly to mRNA. Additionally, full-length positive RNA strands are made to serve as templates for the production of the negative-stranded genome.

Group VI viruses have diploid (two copies) ssRNA genomes that must be converted, using the enzyme reverse transcriptase, to dsDNA; the dsDNA is then transported to the nucleus of the host cell and inserted into the host genome. Then, mRNA can be produced by transcription of the viral DNA that was integrated into the host genome. Group VII viruses have partial dsDNA genomes and make ssRNA intermediates that act as mRNA, but are also converted back into dsDNA genomes by reverse transcriptase, necessary for genome replication. The characteristics of each group in the Baltimore classification are summarized in the table below with examples of each group.