Viruses are diverse entities. They vary in their structure, their replication methods, and in their target hosts. Nearly all forms of life—from bacteria and archaea to eukaryotes such as plants, animals, and fungi—have viruses that infect them. While most biological diversity can be understood through evolutionary history, such as how species have adapted to conditions and environments, much about virus origins and evolution remains unknown.

Viruses were first discovered after the development of a porcelain filter, called the Chamberland-Pasteur filter, which could remove all bacteria visible in the microscope from any liquid sample. In 1886, Adolph Meyer demonstrated that a disease of tobacco plants, tobacco mosaic disease, could be transferred from a diseased plant to a healthy one via liquid plant extracts. In 1892, Dmitri Ivanowski showed that this disease could be transmitted in this way even after the Chamberland-Pasteur filter had removed all viable bacteria from the extract. Still, it was many years before it was proven that these “filterable” infectious agents were not simply very small bacteria but were a new type of very small, disease-causing particle.

Virions, single virus particles, are very small, about 20–250 nanometers in diameter. These individual virus particles are the infectious form of a virus outside the host cell. Unlike bacteria (which are about 100-times larger), we cannot see viruses with a light microscope, with the exception of some large virions of the poxvirus family. It was not until the development of the electron microscope in the late 1930s that scientists got their first good view of the structure of the tobacco mosaic virus (TMV) (see previous lesson) and other viruses (see the figure below).

The surface structure of virions can be observed by both scanning and transmission electron microscopy, whereas the internal structures of the virus can only be observed in images from a transmission electron microscope. The use of these technologies has allowed for the discovery of many viruses of all types of living organisms. They were initially grouped by shared morphology. Later, groups of viruses were classified by the type of nucleic acid they contained, DNA or RNA, and whether their nucleic acid was single- or double-stranded. More recently, molecular analysis of viral replicative cycles has further refined their classification. 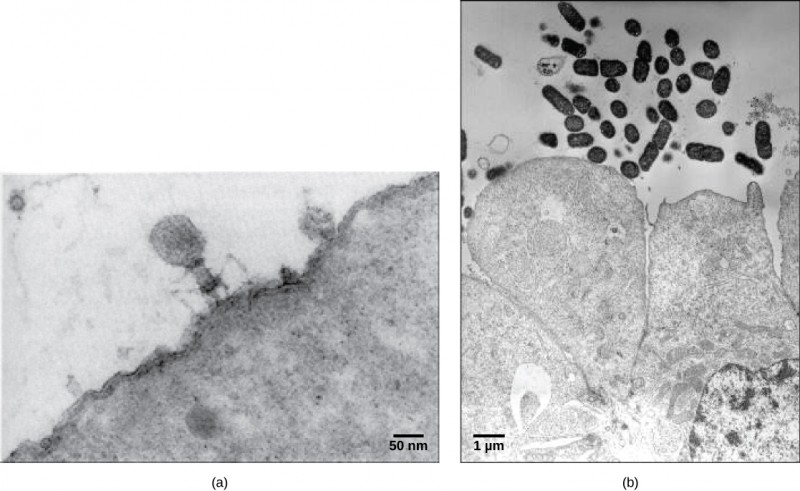