Different Hosts and Their Viruses

As you’ve learned, viruses are often very specific as to which hosts and which cells within the host they will infect. This feature of a virus makes it specific to one or a few species of life on Earth. On the other hand, so many different types of viruses exist on Earth that nearly every living organism has its own set of viruses that tries to infect its cells. Even the smallest and simplest of cells, prokaryotic bacteria, may be attacked by specific types of viruses. 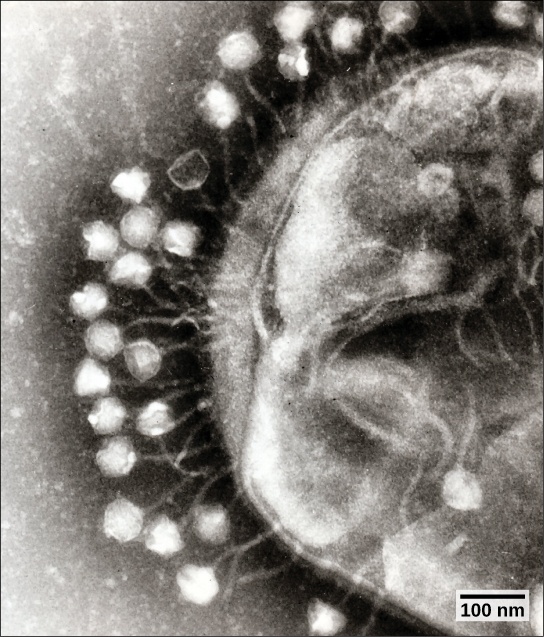 Bacteriophages are viruses that infect bacteria (the figure below). When infection of a cell by a bacteriophage results in the production of new virions, the infection is said to be productive. If the virions are released by bursting the cell, the virus replicates by means of a lytic cycle (the figure below). An example of a lytic bacteriophage is T4, which infects Escherichia coli found in the human intestinal tract.

Sometimes, however, a virus can remain within the cell without being released. For example, when a temperate bacteriophage infects a bacterial cell, it replicates by means of a lysogenic cycle (the figure below), and the viral genome is incorporated into the genome of the host cell. When the phage DNA is incorporated into the host cell genome, it is called a prophage. An example of a lysogenic bacteriophage is the λ (lambda) virus, which also infects the E. coli bacterium.

Viruses that infect plant or animal cells may also undergo infections where they are not producing virions for long periods. An example is the animal herpesviruses, including herpes simplex viruses, the cause of oral and genital herpes in humans. In a process called latency, these viruses can exist in nervous tissue for long periods of time without producing new virions, only to leave latency periodically and cause lesions in the skin where the virus replicates. Even though there are similarities between lysogeny and latency, the term lysogenic cycle is usually reserved to describe bacteriophages. Latency will be described in more detail below. 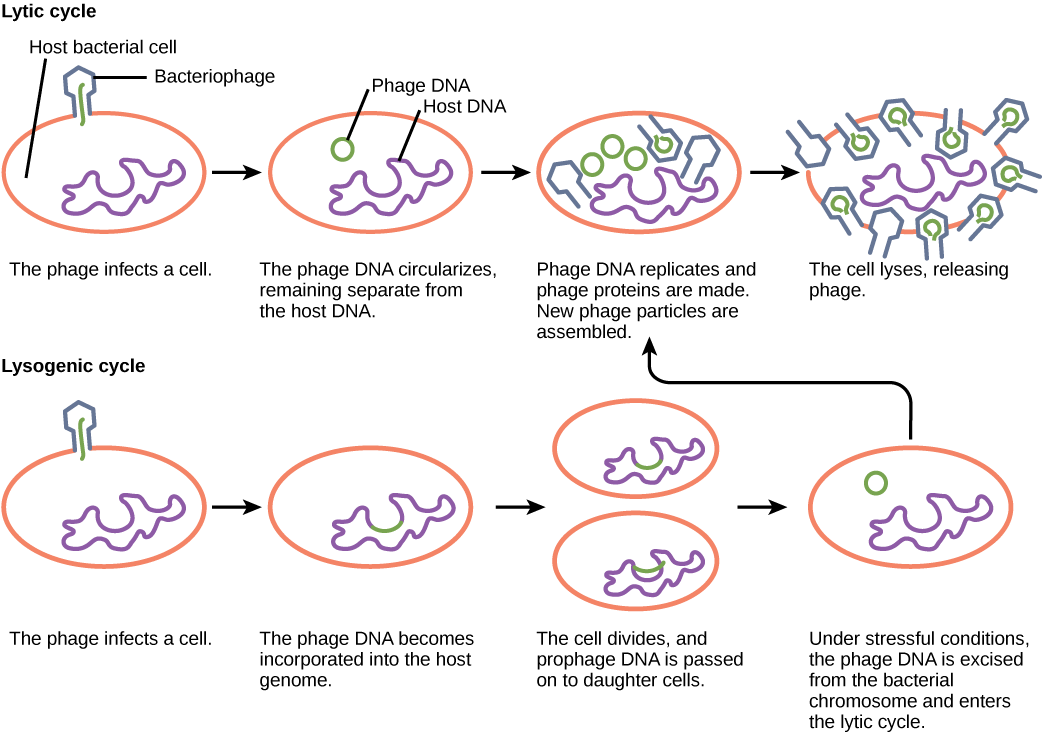 A temperate bacteriophage has both lytic and lysogenic cycles. In the lytic cycle, the phage replicates and lyses the host cell. In the lysogenic cycle, phage DNA is incorporated into the host genome, where it is passed on to subsequent generations. Environmental stressors such as starvation or exposure to toxic chemicals may cause the prophage to excise and enter the lytic cycle.

An environmental stressor can cause the phage to initiate the lysogenic cycle.