Modern fishes include an estimated 31,000 species. Fishes were the earliest vertebrates, with jawless species being the earliest and jawed species evolving later. They are active feeders, rather than sessile, suspension feeders. Jawless fishes—the hagfishes and lampreys—have a distinct cranium and complex sense organs including eyes, distinguishing them from the invertebrate chordates.

Jawless fishes are craniates that represent an ancient vertebrate lineage that arose over one half-billion years ago. In the past, the hagfishes and lampreys were classified together as agnathans. Today, hagfishes and lampreys are recognized as separate clades, primarily because lampreys are true vertebrates, whereas hagfishes are not. A defining feature is the lack of paired lateral appendages (fins). Some of the earliest jawless fishes were the ostracoderms (which translates to “shell-skin”). Ostracoderms were vertebrate fishes encased in bony armor, unlike present-day jawless fishes, which lack bone in their scales.

The clade Myxini includes at least 20 species of hagfishes. Hagfishes are eel-like scavengers that live on the ocean floor and feed on dead invertebrates, other fishes, and marine mammals (see the figure below). Hagfishes are entirely marine and are found in oceans around the world, except for the polar regions. A unique feature of these animals is the slime glands beneath the skin that release mucus through surface pores. This mucus allows the hagfish to escape from the grip of predators. Hagfish can also twist their bodies in a knot to feed and sometimes eat carcasses from the inside out. 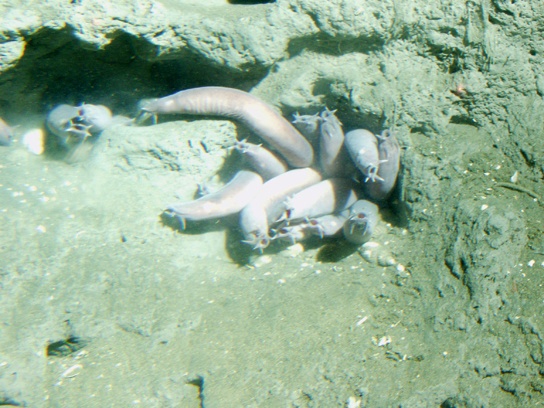 The skeleton of a hagfish is composed of cartilage, which includes a cartilaginous notochord that runs the length of the body. This notochord provides support to the hagfish’s body. Hagfishes do not replace the notochord with a vertebral column during development, as do true vertebrates.

The clade Petromyzontidae includes approximately 35–40 or more species of lampreys. Lampreys are similar to hagfishes in size and shape; however, lampreys possess some vertebral elements. Lampreys lack paired appendages and bone, as do the hagfishes. As adults, lampreys are characterized by a toothed, funnel-like sucking mouth. Many species have a parasitic stage of their life cycle during which they are ectoparasites of fishes (see the figure below). 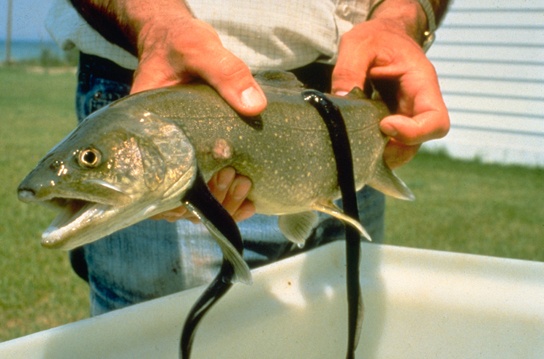 These parasitic sea lampreys attach to their lake trout host by suction and use their rough tongues to rasp away flesh in order to feed on the trout’s blood. (credit: USGS)

Lampreys live primarily in coastal and fresh waters, and have a worldwide distribution, except for in the tropics and polar regions. Some species are marine, but all species spawn in fresh water. Eggs are fertilized externally, and the larvae distinctly differ from the adult form, spending 3 to 15 years as suspension feeders. Once they attain sexual maturity, the adults reproduce and die within days.

Lampreys possess a notochord as adults; however, this notochord is surrounded by a cartilaginous structure called an arcualia, which may resemble an evolutionarily early form of the vertebral column.