Biology » Vertebrates » The Evolution of Primates

The first primate-like mammals are referred to as proto-primates. They were roughly similar to squirrels and tree shrews in size and appearance. The existing fossil evidence (mostly from North Africa) is very fragmented. These proto-primates remain largely mysterious creatures until more fossil evidence becomes available. The oldest known primate-like mammals with a relatively robust fossil record is Plesiadapis (although some researchers do not agree that Plesiadapis was a proto-primate). Fossils of this primate have been dated to approximately 55 million years ago. Plesiadapiforms were proto-primates that had some features of the teeth and skeleton in common with true primates. They were found in North America and Europe in the Cenozoic and went extinct by the end of the Eocene.

The first true primates were found in North America, Europe, Asia, and Africa in the Eocene Epoch. These early primates resembled present-day prosimians such as lemurs. Evolutionary changes continued in these early primates, with larger brains and eyes, and smaller muzzles being the trend. By the end of the Eocene Epoch, many of the early prosimian species went extinct due either to cooler temperatures or competition from the first monkeys. 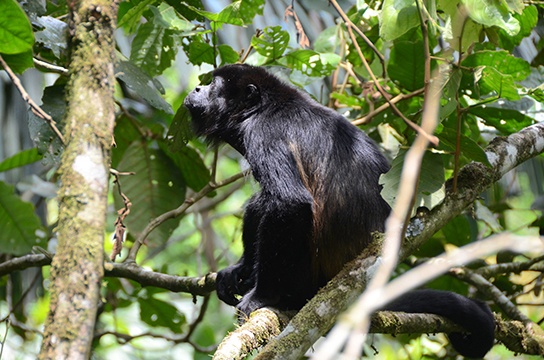 The howler monkey is native to Central and South America. It makes a call that sounds like a lion roaring. (credit: Xavi Talleda)

Apes evolved from the catarrhines in Africa midway through the Cenozoic, approximately 25 million years ago. Apes are generally larger than monkeys and they do not possess a tail. All apes are capable of moving through trees, although many species spend most their time on the ground. Apes are more intelligent than monkeys, and they have relatively larger brains proportionate to body size. The apes are divided into two groups. The lesser apes comprise the family Hylobatidae, including gibbons and siamangs. The great apes include the genera Pan (chimpanzees and bonobos) (see figure (a) below), Gorilla (gorillas), Pongo (orangutans), and Homo (humans) (see figure (b) below). The very arboreal gibbons are smaller than the great apes; they have low sexual dimorphism (that is, the sexes are not markedly different in size); and they have relatively longer arms used for swinging through trees.