Mammals are synapsids, meaning they have a single opening in the skull. They are the only living synapsids, as earlier forms became extinct by the Jurassic period. The early non-mammalian synapsids can be divided into two groups, the pelycosaurs and the therapsids. Within the therapsids, a group called the cynodonts are thought to be the ancestors of mammals (see the figure below). 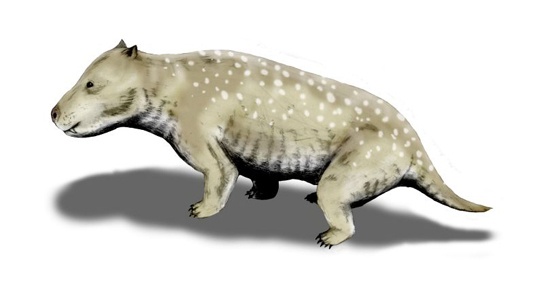 Cynodonts, which first appeared in the Late Permian period 260 million years ago, are thought to be the ancestors of modern mammals. (credit: Nobu Tamura)

A key characteristic of synapsids is endothermy, rather than the ectothermy seen in most other vertebrates. The increased metabolic rate required to internally modify body temperature went hand in hand with changes to certain skeletal structures. The later synapsids, which had more evolved characteristics unique to mammals, possess cheeks for holding food and heterodont teeth, which are specialized for chewing, mechanically breaking down food to speed digestion and releasing the energy needed to produce heat. Chewing also requires the ability to chew and breathe at the same time, which is facilitated by the presence of a secondary palate.

A secondary palate separates the area of the mouth where chewing occurs from the area above where respiration occurs, allowing breathing to proceed uninterrupted during chewing. A secondary palate is not found in pelycosaurs but is present in cynodonts and mammals. The jawbone also shows changes from early synapsids to later ones. The zygomatic arch, or cheekbone, is present in mammals and advanced therapsids such as cynodonts, but is not present in pelycosaurs. The presence of the zygomatic arch suggests the presence of the masseter muscle, which closes the jaw and functions in chewing.

In the appendicular skeleton, the shoulder girdle of therian mammals is modified from that of other vertebrates in that it does not possess a procoracoid bone or an interclavicle, and the scapula is the dominant bone.

Mammals evolved from therapsids in the late Triassic period, as the earliest known mammal fossils are from the early Jurassic period, some 205 million years ago. Early mammals were small, about the size of a small rodent. Mammals first began to diversify in the Mesozoic Era, from the Jurassic to the Cretaceous periods, although most of these mammals were extinct by the end of the Mesozoic. During the Cretaceous period, another radiation of mammals began and continued through the Cenozoic Era, about 65 million years ago.