The evolutionary history of birds is still somewhat unclear. Due to the fragility of bird bones, they do not fossilize as well as other vertebrates. Birds are diapsids, meaning they have two fenestrations or openings in their skulls. Birds belong to a group of diapsids called the archosaurs, which also includes crocodiles and dinosaurs. It is commonly accepted that birds evolved from dinosaurs.

Dinosaurs (including birds) are further subdivided into two groups, the Saurischia (“lizard like”) and the Ornithischia (“bird like”). Despite the names of these groups, it was not the bird-like dinosaurs that gave rise to modern birds. Rather, Saurischia diverged into two groups: One included the long-necked herbivorous dinosaurs, such as Apatosaurus. The second group, bipedal predators called theropods, includes birds. This course of evolution is suggested by similarities between theropod fossils and birds, specifically in the structure of the hip and wrist bones, as well as the presence of the wishbone, formed by the fusing of the clavicles.

One important fossil of an animal intermediate to dinosaurs and birds is Archaeopteryx, which is from the Jurassic period (see the figure below). Archaeopteryx is important in establishing the relationship between birds and dinosaurs, because it is an intermediate fossil, meaning it has characteristics of both dinosaurs and birds. Some scientists propose classifying it as a bird, but others prefer to classify it as a dinosaur. The fossilized skeleton of Archaeopteryx looks like that of a dinosaur, and it had teeth whereas birds do not, but it also had feathers modified for flight, a trait associated only with birds among modern animals. Fossils of older feathered dinosaurs exist, but the feathers do not have the characteristics of flight feathers.

(a) Archaeopteryx lived in the late Jurassic Period around 150 million years ago. It had teeth like a dinosaur, but had (b) flight feathers like modern birds, which can be seen in this fossil.

It is still unclear exactly how flight evolved in birds. Two main theories exist, the arboreal (“tree”) hypothesis and the terrestrial (“land”) hypothesis. The arboreal hypothesis posits that tree-dwelling precursors to modern birds jumped from branch to branch using their feathers for gliding before becoming fully capable of flapping flight. In contrast to this, the terrestrial hypothesis holds that running was the stimulus for flight, as wings could be used to improve running and then became used for flapping flight.

Like the question of how flight evolved, the question of how endothermy evolved in birds still is unanswered. Feathers provide insulation, but this is only beneficial if body heat is being produced internally. Similarly, internal heat production is only viable if insulation is present to retain that heat. It has been suggested that one or the other—feathers or endothermy—evolved in response to some other selective pressure.

After the extinction of Enantiornithes, modern birds became the dominant bird, with a large radiation occurring during the Cenozoic Era. Referred to as Neornithes (“new birds”), modern birds are now classified into two groups, the Paleognathae (“old jaw”) or ratites, a group of flightless birds including ostriches, emus, rheas, and kiwis, and the Neognathae (“new jaw”), which includes all other birds. 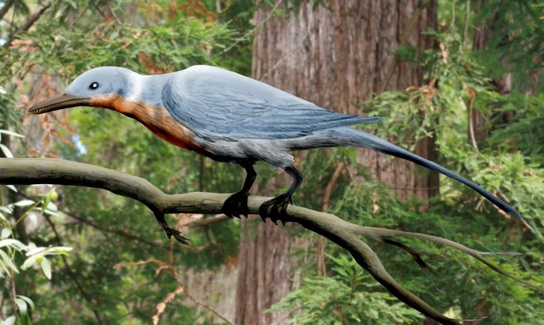 Shanweiniao cooperorum was a species of Enantiornithes that did not survive past the Cretaceous period. (credit: Nobu Tamura)

Veterinarians treat diseases, disorders, and injuries in animals, primarily vertebrates. They treat pets, livestock, and animals in zoos and laboratories. Veterinarians usually treat dogs and cats, but also treat birds, reptiles, rabbits, and other animals that are kept as pets. Veterinarians that work with farms and ranches treat pigs, goats, cows, sheep, and horses.

Veterinarians are required to complete a degree in veterinary medicine, which includes taking courses in animal physiology, anatomy, microbiology, and pathology, among many other courses. The physiology and biochemistry of different vertebrate species differ greatly.

Veterinarians are also trained to perform surgery on many different vertebrate species, which requires an understanding of the vastly different anatomies of various species. For example, the stomach of ruminants like cows has four compartments versus one compartment for non-ruminants. Birds also have unique anatomical adaptations that allow for flight.

Some veterinarians conduct research in academic settings, broadening our knowledge of animals and medical science. One area of research involves understanding the transmission of animal diseases to humans, called zoonotic diseases. For example, one area of great concern is the transmission of the avian flu virus to humans. One type of avian flu virus, H5N1, is a highly pathogenic strain that has been spreading in birds in Asia, Europe, Africa, and the Middle East. Although the virus does not cross over easily to humans, there have been cases of bird-to-human transmission. More research is needed to understand how this virus can cross the species barrier and how its spread can be prevented.