The fossil record provides evidence of the first tetrapods: now-extinct amphibian species dating to nearly 400 million years ago. Evolution of tetrapods from fishes represented a significant change in body plan from one suited to organisms that respired and swam in water, to organisms that breathed air and moved onto land; these changes occurred over a span of 50 million years during the Devonian period.

One of the earliest known tetrapods is from the genus Acanthostega. Acanthostega was aquatic; fossils show that it had gills similar to fishes. However, it also had four limbs, with the skeletal structure of limbs found in present-day tetrapods, including amphibians. Therefore, it is thought that Acanthostega lived in shallow waters and was an intermediate form between lobe-finned fishes and early, fully terrestrial tetrapods. What preceded Acanthostega?

In 2006, researchers published news of their discovery of a fossil of a “tetrapod-like fish,” Tiktaalik roseae, which seems to be an intermediate form between fishes having fins and tetrapods having limbs (see the figure below). Tiktaalik likely lived in a shallow water environment about 375 million years ago. 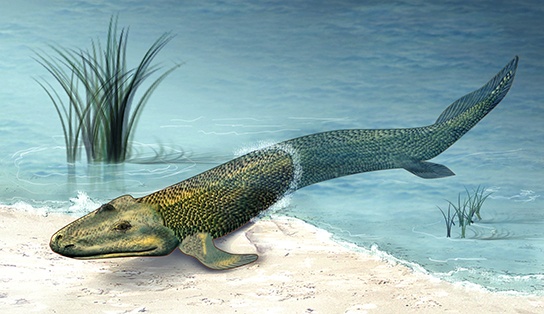 The early tetrapods that moved onto land had access to new nutrient sources and relatively few predators. This led to the widespread distribution of tetrapods during the early Carboniferous period, a period sometimes called the “age of the amphibians.”