The first amniotes evolved from amphibian ancestors approximately 340 million years ago during the Carboniferous period. The early amniotes diverged into two main lines soon after the first amniotes arose. The initial split was into synapsids and sauropsids. Synapsids include all mammals, including extinct mammalian species. Synapsids also include therapsids, which were mammal-like reptiles from which mammals evolved. Sauropsids include reptiles and birds, and can be further divided into anapsids and diapsids.

The key differences between the synapsids, anapsids, and diapsids are the structures of the skull and the number of temporal fenestrae behind each eye (see the figure below). Temporal fenestrae are post-orbital openings in the skull that allow muscles to expand and lengthen. Anapsids have no temporal fenestrae, synapsids have one, and diapsids have two. Anapsids include extinct organisms and may, based on anatomy, include turtles. However, this is still controversial, and turtles are sometimes classified as diapsids based on molecular evidence. The diapsids include birds and all other living and extinct reptiles.

The diapsids diverged into two groups, the Archosauromorpha (“ancient lizard form”) and the Lepidosauromorpha (“scaly lizard form”) during the Mesozoic period (see the figure below). The lepidosaurs include modern lizards, snakes, and tuataras. The archosaurs include modern crocodiles and alligators, and the extinct pterosaurs (“winged lizard”) and dinosaurs (“terrible lizard”). Clade Dinosauria includes birds, which evolved from a branch of dinosaurs. 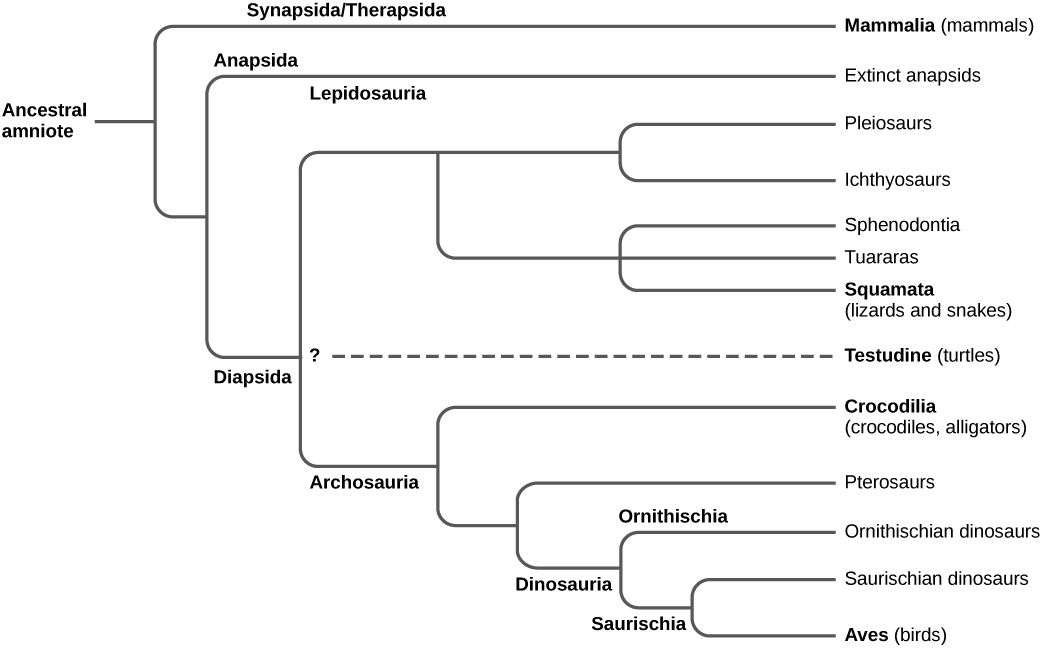 This chart shows the evolution of amniotes. The placement of Testudines (turtles) is currently still debated.

Members of the order Testudines have an anapsid-like skull with one opening. However, molecular studies indicate that turtles descended from a diapsid ancestor. Why might this be the case?

The ancestor of modern Testudines may at one time have had a second opening in the skull, but over time this might have been lost.

In the past, the most common division of amniotes has been into the classes Mammalia, Reptilia, and Aves. Birds are descended, however, from dinosaurs, so this classical scheme results in groups that are not true clades. We will consider birds as a group distinct from reptiles for the purpose of this discussion with the understanding that this does not completely reflect phylogenetic history and relationships.