A cranium is a bony, cartilaginous, or fibrous structure surrounding the brain, jaw, and facial bones (see the figure below). Most bilaterally symmetrical animals have a head; of these, those that have a cranium compose the clade Craniata. Craniata includes the hagfishes (Myxini), which have a cranium but lack a backbone, and all of the organisms called “vertebrates.” 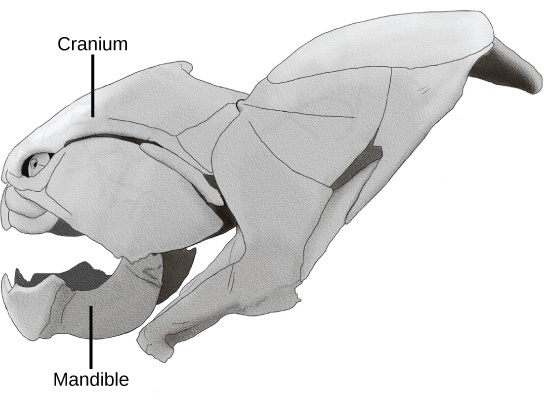 Craniata, including this fish (Dunkleosteus sp.), are characterized by the presence of a cranium, mandible, and other facial bones. (credit: “Steveoc 86”/Wikimedia Commons)

Vertebrates are members of the clade Vertebrata. Vertebrates display the four characteristic features of the chordates; however, members of this group also share derived characteristics that distinguish them from invertebrate chordates. Vertebrata is named for the vertebral column, composed of vertebrae, a series of separate bones joined together as a backbone (see the figure below). In adult vertebrates, the vertebral column replaces the notochord, which is only seen in the embryonic stage.

Vertebrata are characterized by the presence of a backbone, such as the one that runs through the middle of this fish. All vertebrates are in the Craniata clade and have a cranium. (credit: Ernest V. More; taken at Smithsonian Museum of Natural History, Washington, D.C.)

Vertebrates are the largest group of chordates, with more than 62,000 living species. Vertebrates are grouped based on anatomical and physiological traits. More than one classification and naming scheme is used for these animals. Here we will consider the traditional groups Agnatha, Chondrichthyes, Osteichthyes, Amphibia, Reptilia, Aves, and Mammalia, which constitute classes in the subphylum Vertebrata. Many modern authors classify birds within Reptilia, which correctly reflects their evolutionary heritage. We consider them separately only for convenience. Further, we will consider hagfishes and lampreys together as jawless fishes, the agnathans, although emerging classification schemes separate them into chordate jawless fishes (the hagfishes) and vertebrate jawless fishes (the lampreys).

Animals that possess jaws are known as gnathostomes, which means “jawed mouth.” Gnathostomes include fishes and tetrapods—amphibians, reptiles, birds, and mammals. Tetrapods can be further divided into two groups: amphibians and amniotes. Amniotes are animals whose eggs are adapted for terrestrial living, and this group includes mammals, reptiles, and birds. Amniotic embryos, developing in either an externally shed egg or an egg carried by the female, are provided with a water-retaining environment and are protected by amniotic membranes.