Chordates and the Evolution of Vertebrates

Chordates and the Evolution of Vertebrates

Chordata also contains two clades of invertebrates: Urochordata and Cephalochordata. Members of these groups also possess the four distinctive features of chordates at some point during their development.

Members of Urochordata are also known as tunicates (see the figure below). The name tunicate derives from the cellulose-like carbohydrate material, called the tunic, which covers the outer body of tunicates. Although adult tunicates are classified as chordates, they do not have a notochord, a dorsal hollow nerve cord, or a post-anal tail, although they do have pharyngeal slits. The larval form, however, possesses all four structures.

Most tunicates are hermaphrodites. Tunicate larvae hatch from eggs inside the adult tunicate’s body. After hatching, a tunicate larva swims for a few days until it finds a suitable surface on which it can attach, usually in a dark or shaded location. It then attaches via the head to the surface and undergoes metamorphosis into the adult form, at which point the notochord, nerve cord, and tail disappear.

(a) This photograph shows a colony of the tunicate Botrylloides violaceus. (b) The larval stage of the tunicate possesses all of the features characteristic of chordates: a notochord, a dorsal hollow nerve cord, pharyngeal slits, and a post-anal tail. (c) In the adult stage, the notochord, nerve cord, and tail disappear. (credit: modification of work by Dann Blackwood, USGS)

Most tunicates live a sessile existence on the ocean floor and are suspension feeders. The primary foods of tunicates are plankton and detritus. Seawater enters the tunicate’s body through its incurrent siphon. Suspended material is filtered out of this water by a mucous net (pharyngeal slits) and is passed into the intestine via the action of cilia. The anus empties into the excurrent siphon, which expels wastes and water. Tunicates are found in shallow ocean waters around the world.

Members of Cephalochordata possess a notochord, dorsal hollow nerve cord, pharyngeal slits, and a post-anal tail in the adult stage (see the figure below). The notochord extends into the head, which gives the subphylum its name. Extinct members of this subphylum include Pikaia, which is the oldest known cephalochordate. Pikaia fossils were recovered from the Burgess shales of Canada and dated to the middle of the Cambrian age, making them more than 500 million years old.

Extant members of Cephalochordata are the lancelets, named for their blade-like shape. Lancelets are only a few centimeters long and are usually found buried in sand at the bottom of warm temperate and tropical seas. Like tunicates, they are suspension feeders. 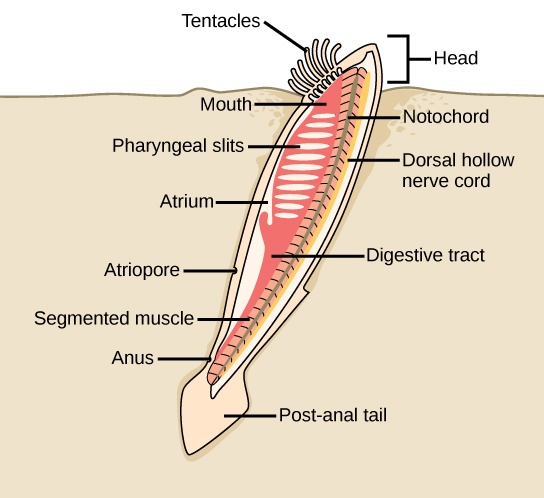 The lancelet, like all cephalochordates, has a head. Adult lancelets retain the four key features of chordates: a notochord, a dorsal hollow nerve cord, pharyngeal slits, and a post-anal tail. Water from the mouth enters the pharyngeal slits, which filter out food particles. The filtered water then collects in the atrium and exits through the atriopore.