The most obvious characteristic that sets birds apart from other modern vertebrates is the presence of feathers, which are modified scales. While vertebrates like bats fly without feathers, birds rely on feathers and wings, along with other modifications of body structure and physiology, for flight.

Birds are endothermic, and because they fly, they require large amounts of energy, necessitating a high metabolic rate. Like mammals, which are also endothermic, birds have an insulating covering that keeps heat in the body: feathers. Specialized feathers called down feathers are especially insulating, trapping air in spaces between each feather to decrease the rate of heat loss. Certain parts of a bird’s body are covered in down feathers, and the base of other feathers have a downy portion, whereas newly hatched birds are covered in down.

Feathers not only act as insulation but also allow for flight, enabling the lift and thrust necessary to become airborne. The feathers on a wing are flexible, so the collective feathers move and separate as air moves through them, reducing the drag on the wing. Flight feathers are asymmetrical, which affects airflow over them and provides some of the lifting and thrusting force required for flight (see the figure below). 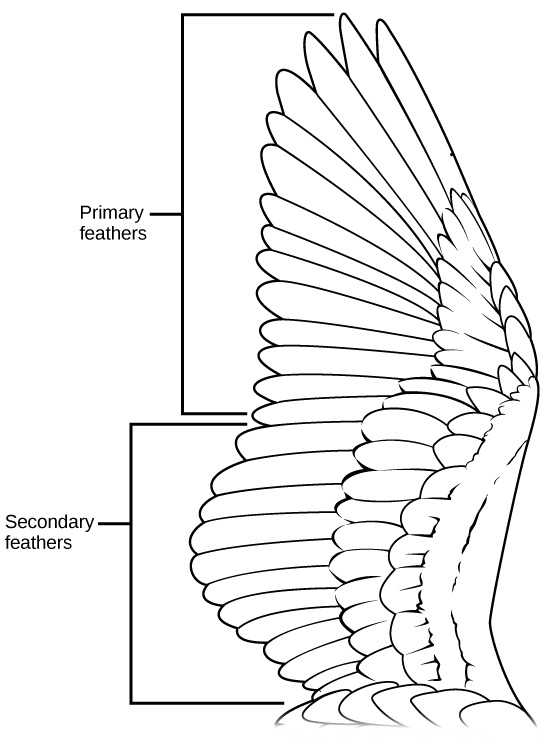 Flapping of the entire wing occurs primarily through the actions of the chest muscles, the pectoralis and the supracoracoideus. These muscles are highly developed in birds and account for a higher percentage of body mass than in most mammals. These attach to a blade-shaped keel, like that of a boat, located on the sternum. The sternum of birds is larger than that of other vertebrates, which accommodates the large muscles required to generate enough upward force to generate lift with the flapping of the wings. Another skeletal modification found in most birds is the fusion of the two clavicles (collarbones), forming the furcula or wishbone. The furcula is flexible enough to bend and provide support to the shoulder girdle during flapping.

An important requirement of flight is a low body weight. As body weight increases, the muscle output required for flying increases. The largest living bird is the ostrich, and while it is much smaller than the largest mammals, it is flightless. For birds that do fly, reduction in body weight makes flight easier. Several modifications are found in birds to reduce body weight, including pneumatization of bones. Pneumatic bones are bones that are hollow, rather than filled with tissue (see the figure below). They contain air spaces that are sometimes connected to air sacs, and they have struts of bone to provide structural reinforcement. Pneumatic bones are not found in all birds, and they are more extensive in large birds than in small birds. Not all bones of the skeleton are pneumatic, although the skulls of almost all birds are.

Many birds have hollow, pneumatic bones, which make flight easier.

Other modifications that reduce weight include the lack of a urinary bladder. Birds possess a cloaca, a structure that allows water to be reabsorbed from waste back into the bloodstream. Uric acid is not expelled as a liquid but is concentrated into urate salts, which are expelled along with fecal matter. In this way, water is not held in the urinary bladder, which would increase body weight. Most bird species only possess one ovary rather than two, further reducing body mass.

The air sacs that extend into bones to form pneumatic bones also join with the lungs and function in respiration. Unlike mammalian lungs in which air flows in two directions, as it is breathed in and out, airflow through bird lungs travels in one direction (see the figure below). Air sacs allow for this unidirectional airflow, which also creates a cross-current exchange system with the blood. In a cross-current or counter-current system, the air flows in one direction and the blood flows in the opposite direction, creating a very efficient means of gas exchange.

Avian respiration is an efficient system of gas exchange with air flowing unidirectionally. During inhalation, air passes from the trachea into posterior air sacs, then through the lungs to anterior air sacs. The air sacs are connected to the hollow interior of bones. During exhalation, air from air sacs passes into the lungs and out the trachea. (credit: modification of work by L. Shyamal)