The early application of iron to the manufacture of tools and weapons was possible because of the wide distribution of iron ores and the ease with which iron compounds in the ores could be reduced by carbon. For a long time, charcoal was the form of carbon used in the reduction process. The production and use of iron became much more widespread about 1620, when coke was introduced as the reducing agent. Coke is a form of carbon formed by heating coal in the absence of air to remove impurities.

The first step in the metallurgy of iron is usually roasting the ore (heating the ore in air) to remove water, decomposing carbonates into oxides, and converting sulfides into oxides. The oxides are then reduced in a blast furnace that is 80–100 feet high and about 25 feet in diameter (see the figure below) in which the roasted ore, coke, and limestone (impure CaCO3) are introduced continuously into the top. Molten iron and slag are withdrawn at the bottom. The entire stock in a furnace may weigh several hundred tons. 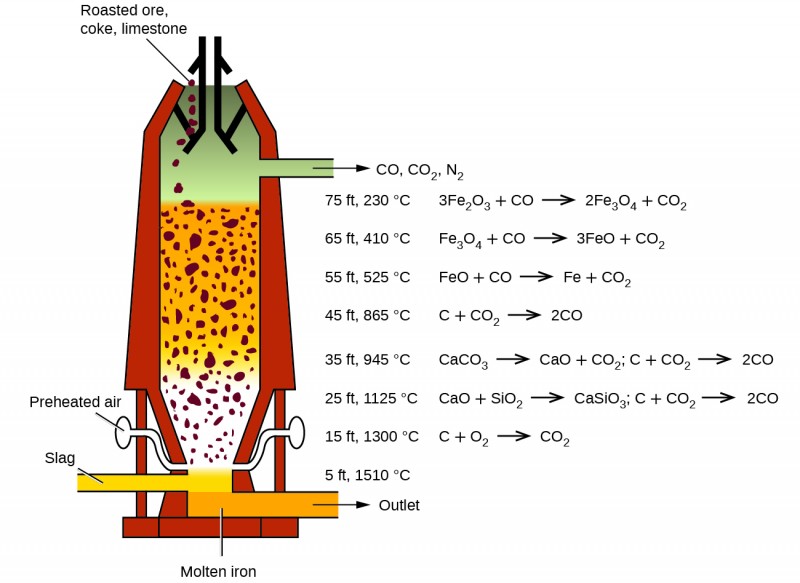 Within a blast furnace, different reactions occur in different temperature zones. Carbon monoxide is generated in the hotter bottom regions and rises upward to reduce the iron oxides to pure iron through a series of reactions that take place in the upper regions.

Near the bottom of a furnace are nozzles through which preheated air is blown into the furnace. As soon as the air enters, the coke in the region of the nozzles is oxidized to carbon dioxide with the liberation of a great deal of heat. The hot carbon dioxide passes upward through the overlying layer of white-hot coke, where it is reduced to carbon monoxide:

The carbon monoxide serves as the reducing agent in the upper regions of the furnace. The individual reactions are indicated in the figure above.

The iron oxides are reduced in the upper region of the furnace. In the middle region, limestone (calcium carbonate) decomposes, and the resulting calcium oxide combines with silica and silicates in the ore to form slag. The slag is mostly calcium silicate and contains most of the commercially unimportant components of the ore:

Just below the middle of the furnace, the temperature is high enough to melt both the iron and the slag. They collect in layers at the bottom of the furnace; the less dense slag floats on the iron and protects it from oxidation. Several times a day, the slag and molten iron are withdrawn from the furnace. The iron is transferred to casting machines or to a steelmaking plant (see the figure below). 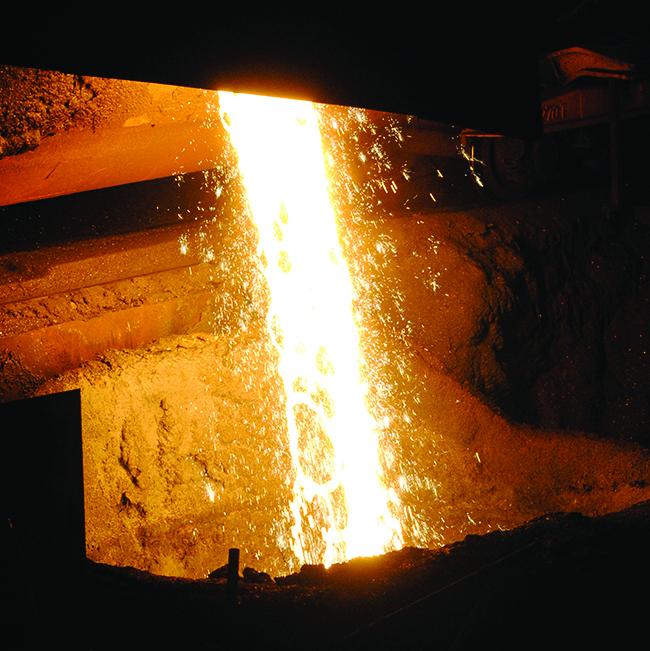 Much of the iron produced is refined and converted into steel. Steel is made from iron by removing impurities and adding substances such as manganese, chromium, nickel, tungsten, molybdenum, and vanadium to produce alloys with properties that make the material suitable for specific uses. Most steels also contain small but definite percentages of carbon (0.04%–2.5%). However, a large part of the carbon contained in iron must be removed in the manufacture of steel; otherwise, the excess carbon would make the iron brittle.

You can watch an animation of steelmaking that walks you through the process.