A superconductor is a substance that conducts electricity with no resistance. This lack of resistance means that there is no energy loss during the transmission of electricity. This would lead to a significant reduction in the cost of electricity.

One of the most exciting scientific discoveries of the 1980s was the characterization of compounds that exhibit superconductivity at temperatures above 90 K. (Compared to liquid helium, 90 K is a high temperature.) Typical among the high-temperature superconducting materials are oxides containing yttrium (or one of several rare earth elements), barium, and copper in a 1:2:3 ratio. The formula of the ionic yttrium compound is YBa2Cu3O7.

The new materials become superconducting at temperatures close to 90 K (see the figure below), temperatures that can be reached by cooling with liquid nitrogen (boiling temperature of 77 K). Not only are liquid nitrogen-cooled materials easier to handle, but the cooling costs are also about 1000 times lower than for liquid helium. 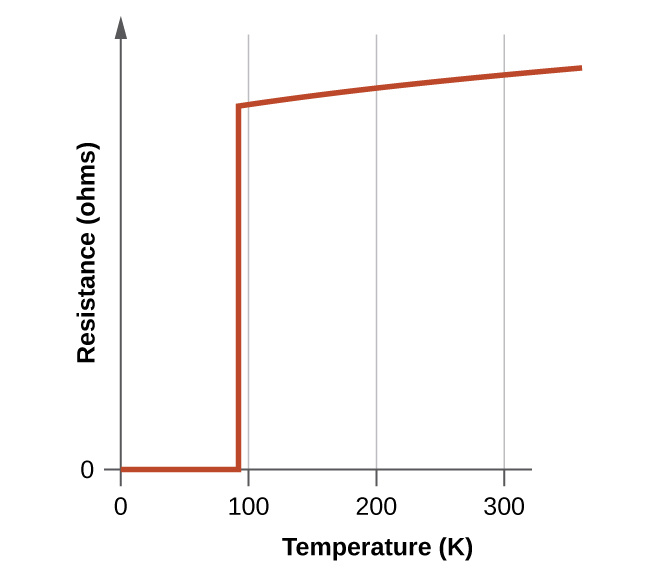 Although the brittle, fragile nature of these materials presently hampers their commercial applications, they have tremendous potential that researchers are hard at work improving their processes to help realize. Superconducting transmission lines would carry current for hundreds of miles with no loss of power due to resistance in the wires. This could allow generating stations to be located in areas remote from population centers and near the natural resources necessary for power production. The first project demonstrating the viability of high-temperature superconductor power transmission was established in New York in 2008.

Researchers are also working on using this technology to develop other applications, such as smaller and more powerful microchips. In addition, high-temperature superconductors can be used to generate magnetic fields for applications such as medical devices, magnetic levitation trains, and containment fields for nuclear fusion reactors (see the figure below).

Watch how a high-temperature superconductor levitates around a magnetic racetrack in the video below.