Coordination Complexes in Nature and Technology

Coordination Complexes in Nature and Technology

Chlorophyll, the green pigment in plants, is a complex that contains magnesium (see the figure below). This is an example of a main group element in a coordination complex. Plants appear green because chlorophyll absorbs red and purple light; the reflected light consequently appears green. The energy resulting from the absorption of light is used in photosynthesis.

(a) Chlorophyll comes in several different forms, which all have the same basic structure around the magnesium center. (b) Copper phthalocyanine blue, a square planar copper complex, is present in some blue dyes.

Many other coordination complexes are also brightly colored. The square planar copper(II) complex phthalocyanine blue (from the figure above) is one of many complexes used as pigments or dyes. This complex is used in blue ink, blue jeans, and certain blue paints.

The structure of heme (see the figure below), the iron-containing complex in hemoglobin, is very similar to that in chlorophyll. In hemoglobin, the red heme complex is bonded to a large protein molecule (globin) by the attachment of the protein to the heme ligand. Oxygen molecules are transported by hemoglobin in the blood by being bound to the iron center. When the hemoglobin loses its oxygen, the color changes to a bluish red. Hemoglobin will only transport oxygen if the iron is Fe2+; oxidation of the iron to Fe3+ prevents oxygen transport. 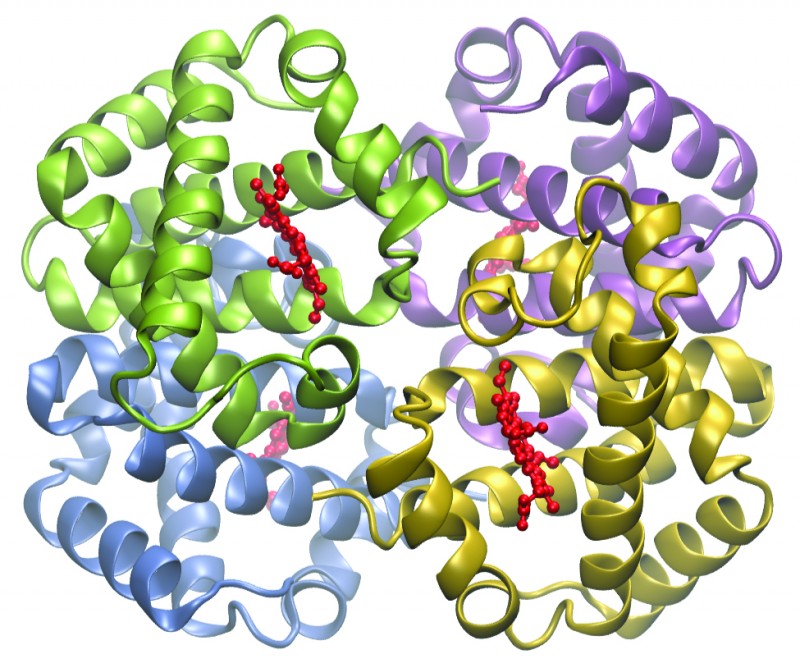 Hemoglobin contains four protein subunits, each of which has an iron center attached to a heme ligand (shown in red), which is coordinated to a globin protein. Each subunit is shown in a different color.

Complexing agents often are used for water softening because they tie up such ions as Ca2+, Mg2+, and Fe2+, which make water hard. Many metal ions are also undesirable in food products because these ions can catalyze reactions that change the color of food. Coordination complexes are useful as preservatives.

For example, the ligand EDTA, (HO2CCH2)2NCH2CH2N(CH2CO2H)2, coordinates to metal ions through six donor atoms and prevents the metals from reacting (see the figure below). This ligand also is used to sequester metal ions in paper production, textiles, and detergents, and has pharmaceutical uses. 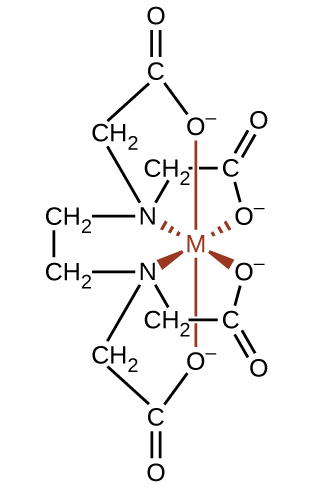 The ligand EDTA binds tightly to a variety of metal ions by forming hexadentate complexes.

Complexing agents that tie up metal ions are also used as drugs. British Anti-Lewisite (BAL), HSCH2CH(SH)CH2OH, is a drug developed during World War I as an antidote for the arsenic-based war gas Lewisite. BAL is now used to treat poisoning by heavy metals, such as arsenic, mercury, thallium, and chromium. The drug is a ligand and functions by making a water-soluble chelate of the metal; the kidneys eliminate this metal chelate (see the figure below).

Another polydentate ligand, enterobactin, which is isolated from certain bacteria, is used to form complexes of iron and thereby to control the severe iron buildup found in patients suffering from blood diseases such as Cooley’s anemia, who require frequent transfusions. As the transfused blood breaks down, the usual metabolic processes that remove iron are overloaded, and excess iron can build up to fatal levels. Enterobactin forms a water-soluble complex with excess iron, and the body can safely eliminate this complex. 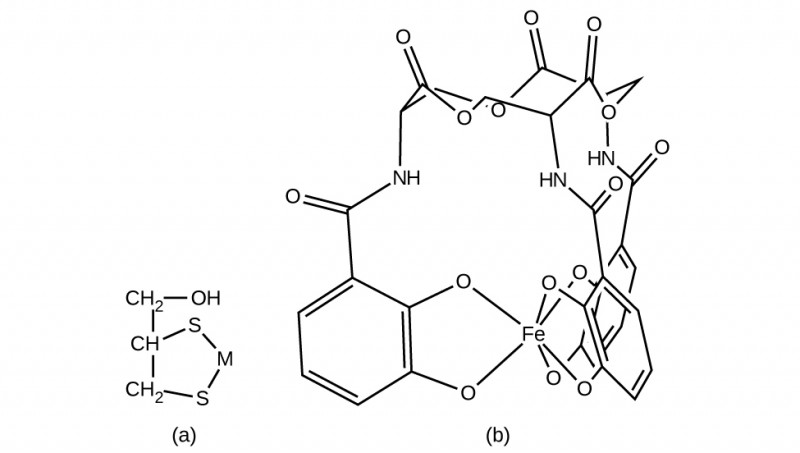 Coordination complexes are used as drugs. (a) British Anti-Lewisite is used to treat heavy metal poisoning by coordinating metals (M), and enterobactin (b) allows excess iron in the blood to be removed.

Ligands like BAL and enterobactin are important in medical treatments for heavy metal poisoning. However, chelation therapies can disrupt the normal concentration of ions in the body, leading to serious side effects, so researchers are searching for new chelation drugs. One drug that has been developed is dimercaptosuccinic acid (DMSA), shown in the figure below. Identify which atoms in this molecule could act as donor atoms.

All of the oxygen and sulfur atoms have lone pairs of electrons that can be used to coordinate to a metal center, so there are six possible donor atoms. Geometrically, only two of these atoms can be coordinated to a metal at once. The most common binding mode involves the coordination of one sulfur atom and one oxygen atom, forming a five-member ring with the metal.

Ligands are also used in the electroplating industry. When metal ions are reduced to produce thin metal coatings, metals can clump together to form clusters and nanoparticles. When metal coordination complexes are used, the ligands keep the metal atoms isolated from each other. It has been found that many metals plate out as a smoother, more uniform, better-looking, and more adherent surface when plated from a bath containing the metal as a complex ion. Thus, complexes such as [Ag(CN)2]− and [Au(CN)2]− are used extensively in the electroplating industry.

In 1965, scientists at Michigan State University discovered that there was a platinum complex that inhibited cell division in certain microorganisms. Later work showed that the complex was cis-diamminedichloroplatinum(II), [Pt(NH3)2(Cl)2], and that the trans isomer was not effective. The inhibition of cell division indicated that this square planar compound could be an anticancer agent.

In 1978, the US Food and Drug Administration approved this compound, known as cisplatin, for use in the treatment of certain forms of cancer. Since that time, many similar platinum compounds have been developed for the treatment of cancer. In all cases, these are the cis isomers and never the trans isomers. The diammine (NH3)2 portion is retained with other groups, replacing the dichloro [(Cl)2] portion. The newer drugs include carboplatin, oxaliplatin, and satraplatin.