In the long-run, all factors of production are variable. Therefore, all costs are variable. The long-run average cost curve is a planning curve, in the sense that, it is a guide to the entrepreneur in his decision to plan the future expansion of his output. In this period, firms can plan to change their capacities or scale, which is prompted by the desire to reduce the cost of production. This period is characterized by a number of possible capacities.

The relationship between the Long-run Average Cost (LAC) Curve and the short-run Average Cost (SAC) Curve can be used to derive the conventional U-shaped LAC curve. Suppose technology is such that plants in a certain industry can assume only three different sizes. That is, the fixed capital equipment making up the plant is available only in three sizes – small, medium and large. Suppose again that the small size plant gives rise to SAC1, the medium one yields SAC2 and the large plant results in SAC3 as illustrated in Figure 9.4 below. 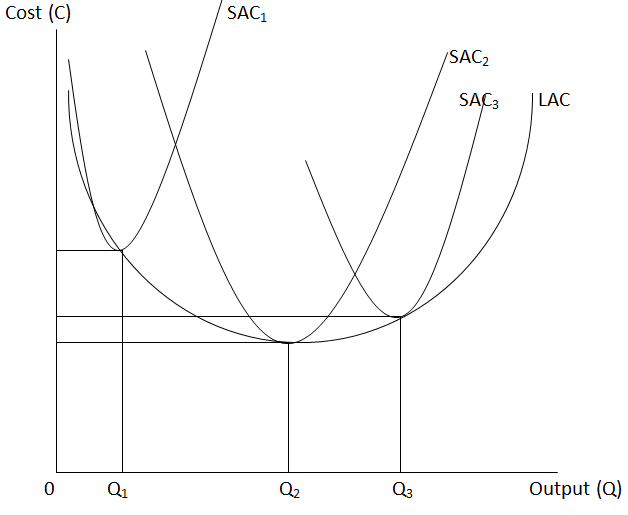 This is a lesson from the tutorial, Theory of Costs and Revenue and you are encouraged to log in or register, so that you can track your progress.