The Origins Of The U.S. Bureaucracy

The Origins of the U.S. Bureaucracy

In the early U.S. republic, the bureaucracy was quite small. This is understandable since the American Revolution was largely a revolt against executive power and the British imperial administrative order. Nevertheless, while neither the word “bureaucracy” nor its synonyms appear in the text of the Constitution, the document does establish a few broad channels through which the emerging government could develop the necessary bureaucratic administration.

For example, Article II, Section 2, provides the president the power to appoint officers and department heads. In the following section, the president is further empowered to see that the laws are “faithfully executed.” More specifically, Article I, Section 8, empowers Congress to establish a post office, build roads, regulate commerce, coin money, and regulate the value of money. Granting the president and Congress such responsibilities appears to anticipate a bureaucracy of some size. Yet the design of the bureaucracy is not described, and it does not occupy its own section of the Constitution as bureaucracy often does in other countries’ governing documents; the design and form were left to be established in practice. 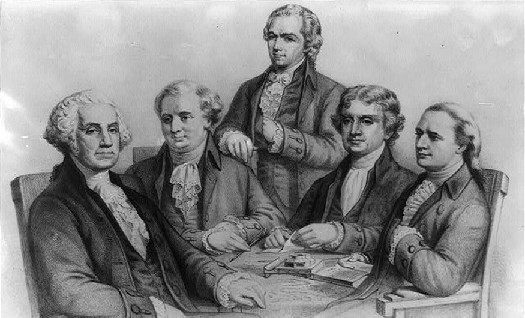 The first development was the rise of centralized party politics in the 1820s. Under President Andrew Jackson, many thousands of party loyalists filled the ranks of the bureaucratic offices around the country. This was the beginning of the spoils system, in which political appointments were transformed into political patronage doled out by the president on the basis of party loyalty.

Political patronage is the use of state resources to reward individuals for their political support. The term “spoils” here refers to paid positions in the U.S. government. As the saying goes, “to the victor,” in this case the incoming president, “go the spoils.” It was assumed that government would work far more efficiently if the key federal posts were occupied by those already supportive of the president and his policies. This system served to enforce party loyalty by tying the livelihoods of the party faithful to the success or failure of the party. The number of federal posts the president sought to use as appropriate rewards for supporters swelled over the following decades.

The second development was industrialization, which in the late nineteenth century significantly increased both the population and economic size of the United States. These changes in turn brought about urban growth in a number of places across the East and Midwest. Railroads and telegraph lines drew the country together and increased the potential for federal centralization. The government and its bureaucracy were closely involved in creating concessions for and providing land to the western railways stretching across the plains and beyond the Rocky Mountains. These changes set the groundwork for the regulatory framework that emerged in the early twentieth century.