The Fall Of Political Patronage

The Fall of Political Patronage

Patronage had the advantage of putting political loyalty to work by making the government quite responsive to the electorate and keeping election turnout robust because so much was at stake. However, the spoils system also had a number of obvious disadvantages. It was a reciprocal system. Clients who wanted positions in the civil service pledged their political loyalty to a particular patron who then provided them with their desired positions. These arrangements directed the power and resources of government toward perpetuating the reward system. They replaced the system that early presidents like Thomas Jefferson had fostered, in which the country’s intellectual and economic elite rose to the highest levels of the federal bureaucracy based on their relative merit. Criticism of the spoils system grew, especially in the mid-1870s, after numerous scandals rocked the administration of President Ulysses S. Grant. 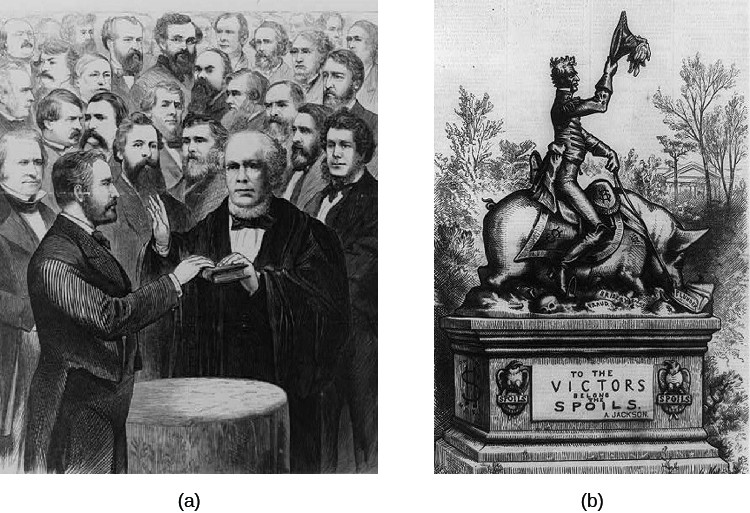 Caption: It was under President Ulysses S. Grant, shown in this engraving being sworn in by Chief Justice Samuel P. Chase at his inauguration in 1873 (a), that the inefficiencies and opportunities for corruption embedded in the spoils system reached their height. Grant was famously loyal to his supporters, a characteristic that—combined with postwar opportunities for corruption—created scandal in his administration. This political cartoon from 1877 (b), nearly half a century after Andrew Jackson was elected president, ridicules the spoils system that was one of his legacies. In it he is shown riding a pig, which is walking over “fraud,” “bribery,” and “spoils” and feeding on “plunder.” (credit a, b: modification of work by the Library of Congress) 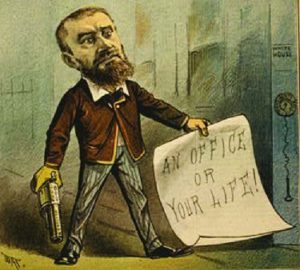 In 1881, after the election of James Garfield, a disgruntled former supporter of his, the failed lawyer Charles J. Guiteau, shot him in the back. Guiteau (pictured in this cartoon of the time) had convinced himself he was due an ambassadorship for his work in electing the president. The assassination awakened the nation to the need for civil service reform. (credit: modification of work by the Library of Congress)

As the negative aspects of political patronage continued to infect bureaucracy in the late nineteenth century, calls for civil service reform grew louder. Those supporting the patronage system held that their positions were well earned; those who condemned it argued that federal legislation was needed to ensure jobs were awarded on the basis of merit. Eventually, after President James Garfield had been assassinated by a disappointed office seeker, Congress responded to cries for reform with the Pendleton Act, also called the Civil Service Reform Act of 1883. The act established the Civil Service Commission, a centralized agency charged with ensuring that the federal government’s selection, retention, and promotion practices were based on open, competitive examinations in a merit system. The passage of this law sparked a period of social activism and political reform that continued well into the twentieth century.

As an active member and leader of the Progressive movement, President Woodrow Wilson is often considered the father of U.S. public administration. Born in Virginia and educated in history and political science at Johns Hopkins University, Wilson became a respected intellectual in his fields with an interest in public service and a profound sense of moralism. He was named president of Princeton University, became president of the American Political Science Association, was elected governor of New Jersey, and finally was elected the twenty-eighth president of the United States in 1912.

It was through his educational training and vocational experiences that Wilson began to identify the need for a public administration discipline. He felt it was getting harder to run a constitutional government than to actually frame one. His stance was that “It is the object of administrative study to discover, first, what government can properly and successfully do, and, secondly, how it can do these proper things with the utmost efficiency. . .” Wilson declared that while politics does set tasks for administration, public administration should be built on a science of management, and political science should be concerned with the way governments are administered. Therefore, administrative activities should be devoid of political manipulations.