A more extreme, and in many instances, more controversial solution to the perceived and real inefficiencies in the bureaucracy is privatization. In the United States, largely because it was born during the Enlightenment and has a long history of championing free-market principles, the urge to privatize government services has never been as strong as it is in many other countries. There are simply far fewer government-run services. Nevertheless, the federal government has used forms of privatization and contracting throughout its history. But following the growth of bureaucracy and government services during President Johnson’s Great Society in the mid-1960s, a particularly vocal movement began calling for a rollback of government services.

This movement grew stronger in the 1970s and 1980s as politicians, particularly on the right, declared that air needed to be let out of the bloated federal government. In the 1990s, as President Bill Clinton and especially his vice president, Al Gore, worked to aggressively shrink the federal bureaucracy, privatization came to be embraced across the political spectrum. The rhetoric of privatization—that market competition would stimulate innovation and efficiency—sounded like the proper remedy to many people and still does. But to many others, talk of privatization is worrying. They contend that certain government functions are simply not possible to replicate in a private context.

When those in government speak of privatization, they are often referring to one of a host of different models that incorporate the market forces of the private sector into the function of government to varying degrees. These include using contractors to supply goods and/or services, distributing government vouchers with which citizens can purchase formerly government-controlled services on the private market, supplying government grants to private organizations to administer government programs, collaborating with a private entity to finance a government program, and even fully divesting the government of a function and directly giving it to the private sector. We will look at three of these types of privatization shortly. 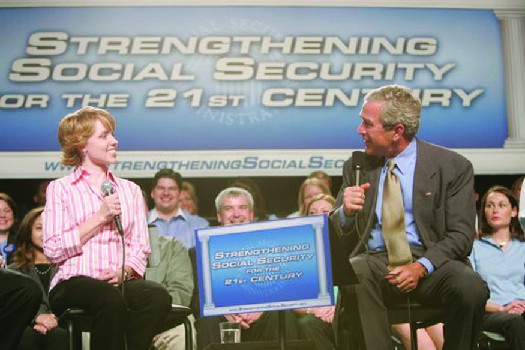 Following his reelection in 2004, President George W. Bush attempted to push a proposal to partially privatize Social Security. The proposal did not make it to either the House or Senate floor for a vote.

Divestiture, or full privatization, occurs when government services are transferred, usually through sale, from government bureaucratic control into an entirely market-based, private environment. At the federal level this form of privatization is very rare, although it does occur. Consider the Student Loan Marketing Association, often referred to by its nickname, Sallie Mae. When it was created in 1973, it was designed to be a government entity for processing federal student education loans. Over time, however, it gradually moved further from its original purpose and became increasingly private. Sallie Mae reached full privatization in 2004. Another example is the U.S. Investigations Services, Inc., which was once the investigative branch of the Office of Personnel Management (OPM) until it was privatized in the 1990s. At the state level, however, the privatization of roads, public utilities, bridges, schools, and even prisons has become increasingly common as state and municipal authorities look for ways to reduce the cost of government.

Possibly the best-known form of privatization is the process of issuing government contracts to private companies in order for them to provide necessary services. This process grew to prominence during President Bill Clinton’s National Partnership for Reinventing Government initiative, intended to streamline the government bureaucracy. Under President George W. Bush, the use of contracting out federal services reached new heights. During the Iraq War, for example, large corporations like Kellogg Brown & Root, owned by Haliburton at the time, signed government contracts to perform a number of services once done by the military, such as military base construction, food preparation, and even laundry services. By 2006, reliance on contracting to run the war was so great that contractors outnumbered soldiers. Such contracting has faced quite a bit of criticism for both its high cost and its potential for corruption and inefficiencies. However, it has become so routine that it is unlikely to slow any time soon.

Third-party financing is a far more complex form of privatization than divestiture or contracting. Here the federal government signs an agreement with a private entity so the two can form a special-purpose vehicle to take ownership of the object being financed. The special-purpose vehicle is empowered to reach out to private financial markets to borrow money. This type of privatization is typically used to finance government office space, military base housing, and other large infrastructure projects. Departments like the Congressional Budget Office have frequently criticized this form of privatization as particularly inefficient and costly for the government.

One the most the most important forms of bureaucratic oversight comes from inside the bureaucracy itself. Those within are in the best position to recognize and report on misconduct. But bureaucracies tend to jealously guard their reputations and are generally resistant to criticism from without and from within. This can create quite a problem for insiders who recognize and want to report mismanagement and even criminal behavior. The personal cost of doing the right thing can be prohibitive. For a typical bureaucrat faced with the option of reporting corruption and risking possible termination or turning the other way and continuing to earn a living, the choice is sometimes easy.

Under heightened skepticism due to government inefficiency and outright corruption in the 1970s, government officials began looking for solutions. When Congress drafted the Civil Service Reform Act of 1978, it specifically included rights for federal whistleblowers, those who publicize misdeeds committed within a bureaucracy or other organization, and set up protection from reprisals. The act’s Merit Systems Protection Board is a quasi-juridical institutional board headed by three members appointed by the president and confirmed by the Senate that hears complaints, conducts investigations into possible abuses, and institutes protections for bureaucrats who speak out. Over time, Congress and the president have strengthened these protections with additional acts. These include the Whistleblower Protection Act of 1989 and the Whistleblower Protection Enhancement Act of 2012, which further compelled federal agencies to protect whistleblowers who reasonably perceive that an institution or the people in the institution are acting inappropriately. 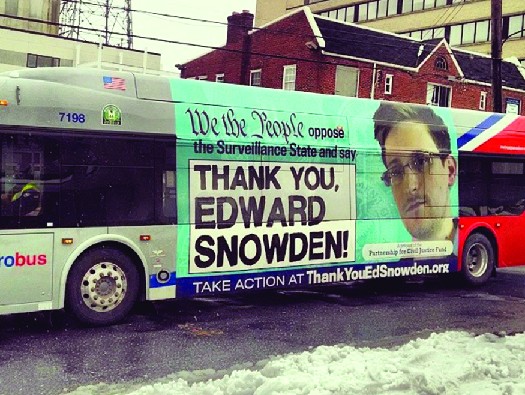 In 2013, Edward Snowden, an unknown computer professional working under contract within the National Security Agency, copied and released to the press classified information that revealed an expansive and largely illegal secret surveillance network the government was operating within the United States. Fearing reprisals, Snowden fled to Hong Kong and then Moscow. Some argue that his actions were irresponsible and he should be prosecuted. Others champion his actions and hold that without them, the illegal spying would have continued. Regardless, the Snowden case reveals important weaknesses in whistleblower protections in the United States. (credit: modification of work by Bruno Sanchez-Andrade Nuño)