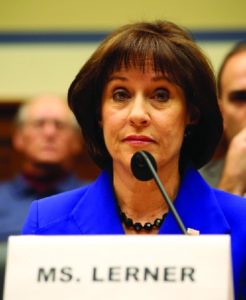 In this photograph, Lois Lerner, the former director of the Internal Revenue Service’s Exempt Organizations Unit, sits before an oversight committee in Congress following a 2013 investigation. On the advice of her attorney, Lerner invoked her Fifth Amendment right not to incriminate herself and refused to answer questions.

The ability for bureaucracies to develop their own rules and in many ways control their own budgets has often been a matter of great concern for elected leaders. As a result, elected leaders have employed a number of strategies and devices to control public administrators in the bureaucracy.

Congress is particularly empowered to apply oversight of the federal bureaucracy because of its power to control funding and approve presidential appointments. The various bureaucratic agencies submit annual summaries of their activities and budgets for the following year, and committees and subcommittees in both chambers regularly hold hearings to question the leaders of the various bureaucracies. These hearings are often tame, practical, fact-finding missions. Occasionally, however, when a particular bureaucracy has committed or contributed to a blunder of some magnitude, the hearings can become quite animated and testy.

This occurred in 2013 following the realization by Congress that the IRS had selected for extra scrutiny certain groups that had applied for tax-exempt status. While the error could have been a mere mistake or have resulted from any number of reasons, many in Congress became enraged at the thought that the IRS might purposely use its power to inconvenience citizens and their groups. The House directed its Committee on Oversight and Government Reform to launch an investigation into the IRS, during which time it interviewed and publicly scrutinized a number of high-ranking civil servants.

Perhaps Congress’s most powerful oversight tool is the Government Accountability Office (GAO). The GAO is an agency that provides Congress, its committees, and the heads of the executive agencies with auditing, evaluation, and investigative services. It is designed to operate in a fact-based and nonpartisan manner to deliver important oversight information where and when it is needed. The GAO’s role is to produce reports, mostly at the insistence of Congress. In the approximately nine hundred reports it completes per year, the GAO sends Congress information about budgetary issues for everything from education, health care, and housing to defense, homeland security, and natural resource management. Since it is an office within the federal bureaucracy, the GAO also supplies Congress with its own annual performance and accountability report. This report details the achievements and remaining weaknesses in the actions of the GAO for any given year.

Apart from Congress, the president also executes oversight over the extensive federal bureaucracy through a number of different avenues. Most directly, the president controls the bureaucracies by appointing the heads of the fifteen cabinet departments and of many independent executive agencies, such as the CIA, the EPA, and the Federal Bureau of Investigation. These cabinet and agency appointments go through the Senate for confirmation.

The other important channel through which the office of the president conducts oversight over the federal bureaucracy is the Office of Management and Budget (OMB). The primary responsibility of the OMB is to produce the president’s annual budget for the country. With this huge responsibility, however, comes a number of other responsibilities. These include reporting to the president on the actions of the various executive departments and agencies in the federal government, overseeing the performance levels of the bureaucracies, coordinating and reviewing federal regulations for the president, and delivering executive orders and presidential directives to the various agency heads.

Controversy and the CFPB: Overseeing a Bureau Whose Job Is Oversight

During the 1990s, the two political parties in the United States had largely come together over the issue of the federal bureaucracy. While differences remained, a great number of bipartisan attempts to roll back the size of government took place during the Clinton administration. This shared effort began to fall apart during the presidency of Republican George W. Bush, who made repeated attempts to use contracting and privatization to reduce the size of the federal bureaucracy more than Democrats were willing to accept.

This growing division was further compounded by Great Recession that began in 2007. For many on the left side of the political spectrum, the onset of the recession reflected a failure of weakened federal bureaucracies to properly regulate the financial markets. To those on the right, it merely reinforced the belief that government bureaucracies are inherently inefficient. Over the next few years, as the government attempted to grapple with the consequences of the recession, these divisions only grew.

The debate over one particular bureaucratic response to the recession provides important insight into these divisions. The bureau in question is the Consumer Financial Protection Bureau (CFPB), an agency created in 2011 specifically to oversee certain financial industries that had proven themselves to be especially prone to abusive practices, such as sub-prime mortgage lenders and payday lenders. To many in the Republican Party, this new bureau was merely another instance of growing the federal bureaucracy to take care of problems caused by an inefficient government. To many in the Democratic Party, the new agency was an important cop on a notably chaotic street.

Divisions over this agency were so bitter that Republicans refused for a time to allow the Senate to consider confirming anyone to head the new bureau. Many wanted the bureau either scrapped or headed by a committee that would have to generate consensus in order to act. They attempted to cut the bureau’s budget and erected mountains of red tape designed to slow the CFPB’s achievement of its goals. During the height of the recession, many Democrats saw these tactics as a particularly destructive form of obstruction while the country reeled from the financial collapse. 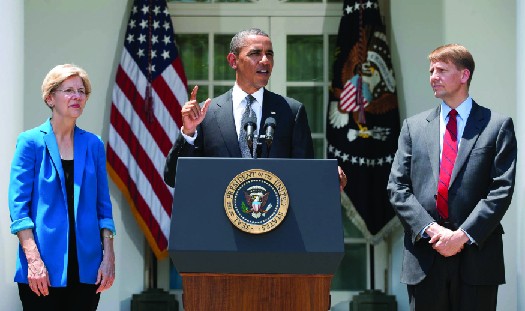 In this photograph, Elizabeth Warren, then a law school professor who proposed the CFPB, stands with President Obama and Richard Cordray, the president’s pick to serve as director of the new agency. Warren is currently a U.S. senator from Massachusetts.

As the recession recedes into the past, however, the political heat the CFPB once generated has steadily declined. Republicans still push to reduce the power of the bureau and Democrats in general still support it, but lack of urgency has pushed these differences into the background. Indeed, there may be a growing consensus between the two parties that the bureau should be more tightly controlled. In the spring of 2016, as the agency was announcing new rules to help further restrict the predatory practices of payday lenders, a handful of Democratic members of Congress, including the party chair, joined Republicans to draft legislation to prevent the CFPB from further regulating lenders. This joint effort may be an anomaly. But it may also indicate the start of a return to more bipartisan interpretation of bureaucratic institutions.