A number of laws passed in the decades between the end of the Second World War and the late 1970s have created a framework through which citizens can exercise their own bureaucratic oversight. The two most important laws are the Freedom of Information Act of 1966 and the Government in Sunshine Act of 1976. Like many of the modern bureaucratic reforms in the United States, both emerged during a period of heightened skepticism about government activities.

The first, the Freedom of Information Act of 1966 (FOIA), emerged in the early years of the Johnson presidency as the United States was conducting secret Cold War missions around the world, the U.S. military was becoming increasingly mired in the conflict in Vietnam, and questions were still swirling around the Kennedy assassination. FOIA provides journalists and the general public the right to request records from various federal agencies. These agencies are required by law to release that information unless it qualifies for one of nine exemptions. These exceptions cite sensitive issues related to national security or foreign policy, internal personnel rules, trade secrets, violations of personnel privacy rights, law enforcement information, and oil well data. FOIA also compels agencies to post some types of information for the public regularly without being requested. 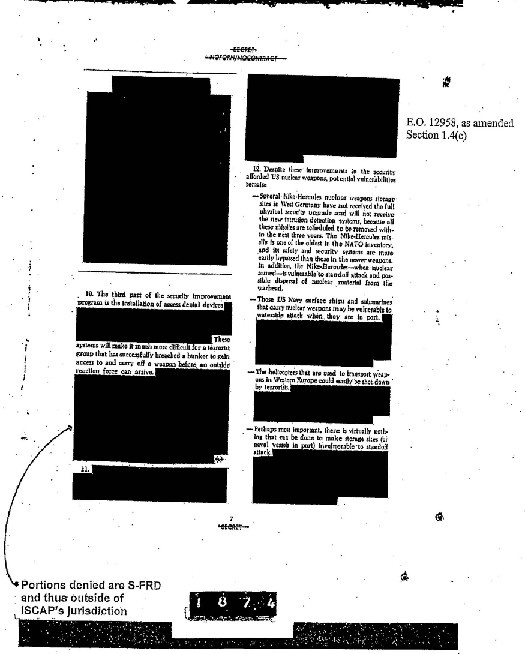 As this CIA document shows, even information released under FOIA can be greatly restricted by the agencies releasing it. The black marks cover information the CIA deemed particularly sensitive.

In fiscal year 2015, the government received 713,168 FOIA requests, with just three departments—Defense, Homeland Security, and Justice—accounting for more than half those queries. The Center for Effective Government analyzed the fifteen federal agencies that receive the most FOIA requests and concluded that they generally struggle to implement public disclosure rules. In its latest report, published in 2015 and using 2012 and 2013 data (the most recent available), ten of the fifteen did not earn satisfactory overall grades, scoring less than seventy of a possible one hundred points.

The Government in Sunshine Act of 1976 is different from FOIA in that it requires all multi-headed federal agencies to hold their meetings in a public forum on a regular basis. The name “Sunshine Act” is derived from the old adage that “sunlight is the best disinfectant”—the implication being that governmental and bureaucratic corruption thrive in secrecy but shrink when exposed to the light of public scrutiny. The act defines a meeting as any gathering of agency members in person or by phone, whether in a formal or informal manner.

Like FOIA, the Sunshine Act allows for exceptions. These include meetings where classified information is discussed, proprietary data has been submitted for review, employee privacy matters are discussed, criminal matters are brought up, and information would prove financially harmful to companies were it released. Citizens and citizen groups can also follow rulemaking and testify at hearings held around the country on proposed rules. The rulemaking process and the efforts by federal agencies to keep open records and solicit public input on important changes are examples of responsive bureaucracy.