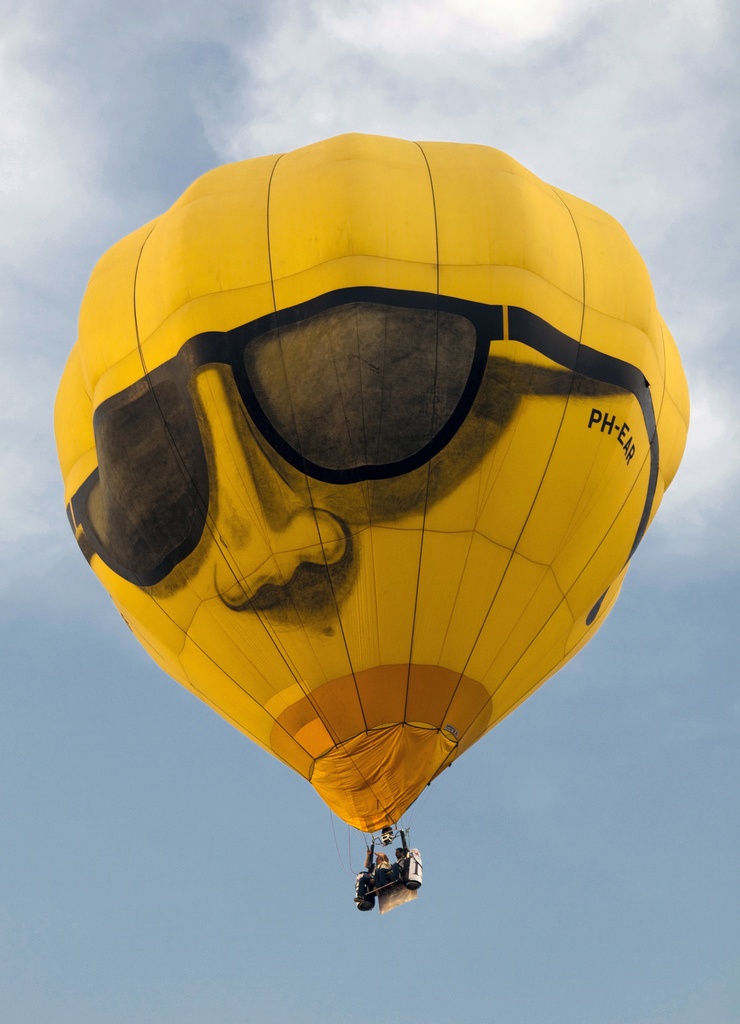 The air inside this hot air balloon flying over Putrajaya, Malaysia, is hotter than the ambient air. As a result, the balloon experiences a buoyant force pushing it upward. (credit: Kevin Poh, Flickr)

In this section, we continue to explore the thermal behavior of gases. In particular, we examine the characteristics of atoms and molecules that compose gases. (Most gases, for example nitrogen, \({\text{N}}_{2}\), and oxygen, \({\text{O}}_{2}\), are composed of two or more atoms. We will primarily use the term “molecule” in discussing a gas because the term can also be applied to monatomic gases, such as helium.)

Gases are easily compressed. We can see evidence of this in this table, where you will note that gases have the largest coefficients of volume expansion. The large coefficients mean that gases expand and contract very rapidly with temperature changes. In addition, you will note that most gases expand at the same rate, or have the same \(\beta \). This raises the question as to why gases should all act in nearly the same way, when liquids and solids have widely varying expansion rates.

Atoms and molecules in a gas are typically widely separated, as shown. Because the forces between them are quite weak at these distances, the properties of a gas depend more on the number of atoms per unit volume and on temperature than on the type of atom.

To get some idea of how pressure, temperature, and volume of a gas are related to one another, consider what happens when you pump air into an initially deflated tire. The tire’s volume first increases in direct proportion to the amount of air injected, without much increase in the tire pressure. Once the tire has expanded to nearly its full size, the walls limit volume expansion. If we continue to pump air into it, the pressure increases. The pressure will further increase when the car is driven and the tires move. Most manufacturers specify optimal tire pressure for cold tires. (See the figure below.)

At room temperatures, collisions between atoms and molecules can be ignored. In this case, the gas is called an ideal gas, in which case the relationship between the pressure, volume, and temperature is given by the equation of state called the ideal gas law.

The ideal gas law states that

where \(P\) is the absolute pressure of a gas, \(V\) is the volume it occupies, \(N\) is the number of atoms and molecules in the gas, and \(T\) is its absolute temperature. The constant \(k\) is called the Boltzmann constant in honor of Austrian physicist Ludwig Boltzmann (1844–1906) and has the value

The ideal gas law can be derived from basic principles, but was originally deduced from experimental measurements of Charles’ law (that volume occupied by a gas is proportional to temperature at a fixed pressure) and from Boyle’s law (that for a fixed temperature, the product \(\text{PV}\) is a constant). In the ideal gas model, the volume occupied by its atoms and molecules is a negligible fraction of \(V\). The ideal gas law describes the behavior of real gases under most conditions. (Note, for example, that \(N\) is the total number of atoms and molecules, independent of the type of gas.)

Let us see how the ideal gas law is consistent with the behavior of filling the tire when it is pumped slowly and the temperature is constant. At first, the pressure \(P\) is essentially equal to atmospheric pressure, and the volume \(V\) increases in direct proportion to the number of atoms and molecules \(N\) put into the tire. Once the volume of the tire is constant, the equation \(\text{PV}=\text{NkT}\) predicts that the pressure should increase in proportion to the number N of atoms and molecules.

The pressure in the tire is changing only because of changes in temperature. First we need to identify what we know and what we want to know, and then identify an equation to solve for the unknown.

1. Convert temperatures from Celsius to Kelvin.

2. Substitute the known values into the equation.

Inflate a balloon at room temperature. Leave the inflated balloon in the refrigerator overnight. What happens to the balloon, and why?

Example: Calculating the Number of Molecules in a Cubic Meter of Gas

How many molecules are in a typical object, such as gas in a tire or water in a drink? We can use the ideal gas law to give us an idea of how large \(N\) typically is.

Calculate the number of molecules in a cubic meter of gas at standard temperature and pressure (STP), which is defined to be \(0\text{º}\text{C}\) and atmospheric pressure.

Because pressure, volume, and temperature are all specified, we can use the ideal gas law \(\text{PV}=\text{NkT}\), to find \(N\).

4. Substitute the known values into the equation and solve for \(N\).

This is a lesson from the tutorial, Temperature, Kinetic Theory, and Gas Laws and you are encouraged to log in or register, so that you can track your progress.