Levels of Organization of Living Things

Living things are highly organized and structured, following a hierarchy that can be examined on a scale from small to large. In general, the atom is the smallest and most fundamental unit of matter. It consists of a nucleus surrounded by electrons. Atoms form molecules. A molecule is a chemical structure consisting of at least two atoms held together by one or more chemical bonds. 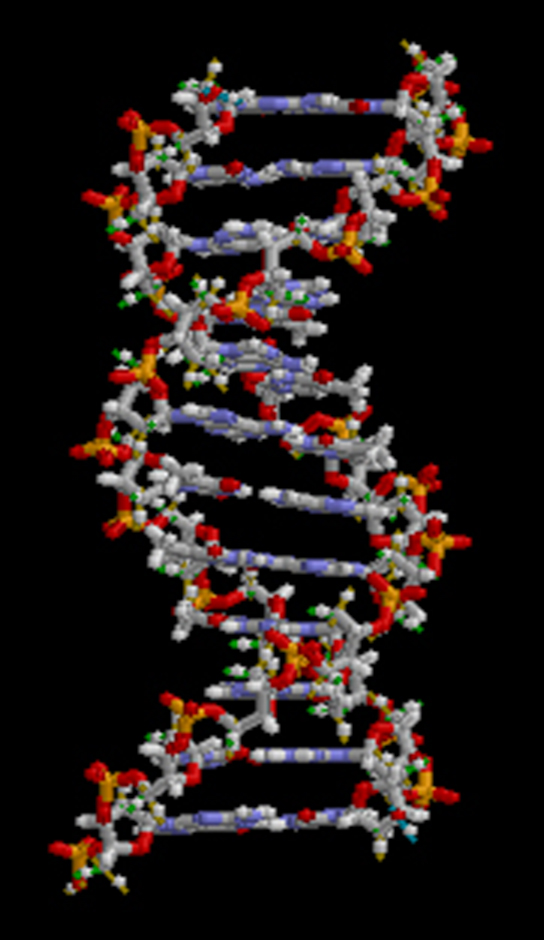 All molecules, including this DNA molecule, are composed of atoms. Image credit: “brian0918”/Wikimedia Commons

Some cells contain aggregates of macromolecules surrounded by membranes. These are called organelles. Organelles are small structures that exist within cells. Examples of organelles include mitochondria and chloroplasts, which carry out indispensable functions: mitochondria produce energy to power the cell, while chloroplasts enable green plants to utilize the energy in sunlight to make sugars.

All living things are made of cells. The cell itself is the smallest fundamental unit of structure and function in living organisms. (This requirement is why viruses are not considered living: they are not made of cells. To make new viruses, they have to invade and hijack the reproductive mechanism of a living cell; only then can they obtain the materials they need to reproduce.)

In larger organisms, cells combine to make tissues, which are groups of similar cells carrying out similar or related functions. Organs are collections of tissues grouped together performing a common function. Organs are present not only in animals but also in plants.

An organ system is a higher level of organization that consists of functionally related organs. Mammals have many organ systems. For instance, the circulatory system transports blood through the body and to and from the lungs; it includes organs such as the heart and blood vessels.

Organisms are individual living entities. For example, each tree in a forest is an organism. Single-celled prokaryotes and single-celled eukaryotes are also considered organisms and are typically referred to as microorganisms.

A community is the sum of populations inhabiting a particular area. For instance, all of the trees, flowers, insects, and other populations in a forest form the forest’s community.

The biological levels of organization of living things are shown. From a single organelle to the entire biosphere, living organisms are parts of a highly structured hierarchy. Image Attribution: OpenStax Biology (CC BY 4.0)

Ecosystems and the Biosphere

The forest itself is an ecosystem. An ecosystem consists of all the living things in a particular area together with the abiotic, non-living parts of that environment such as nitrogen in the soil or rain water.

At the highest level of organization (see image above), the biosphere is the collection of all ecosystems. In general, it represents the zones of life on earth. It includes land, water, and even the atmosphere to a certain extent.