Nutrients From Other Sources

Nutrients from Other Sources

Some plants cannot produce their own food and must obtain their nutrition from outside sources. This may occur with plants that are parasitic or saprophytic. Some plants are mutualistic symbionts, epiphytes, or insectivorous.

A parasitic plant depends on its host for survival. Some parasitic plants have no leaves. An example of this is the dodder (see the figure below), which has a weak, cylindrical stem that coils around the host and forms suckers. From these suckers, cells invade the host stem and grow to connect with the vascular bundles of the host. The parasitic plant obtains water and nutrients through these connections. The plant is a total parasite (a holoparasite) because it is completely dependent on its host. Other parasitic plants (hemiparasites) are fully photosynthetic and only use the host for water and minerals. There are about 4,100 species of parasitic plants. 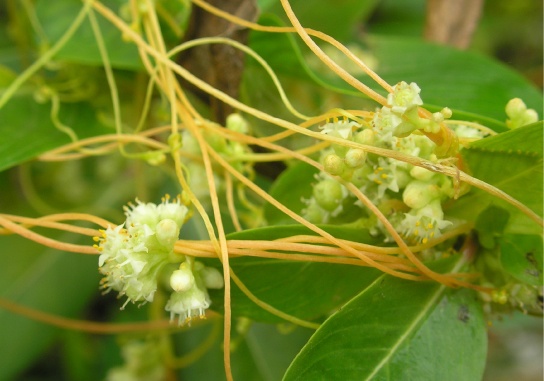 The dodder is a holoparasite that penetrates the host’s vascular tissue and diverts nutrients for its own growth. Note that the vines of the dodder, which has white flowers, are beige. The dodder has no chlorophyll and cannot produce its own food. (credit: “Lalithamba”/Flickr)

A saprophyte is a plant that does not have chlorophyll and gets its food from dead matter, similar to bacteria and fungi (note that fungi are often called saprophytes, which is incorrect, because fungi are not plants). Plants like these use enzymes to convert organic food materials into simpler forms from which they can absorb nutrients (see the figure below). Most saprophytes do not directly digest dead matter: instead, they parasitize fungi that digest dead matter, or are mycorrhizal, ultimately obtaining photosynthate from a fungus that derived photosynthate from its host. Saprophytic plants are uncommon; only a few species are described. 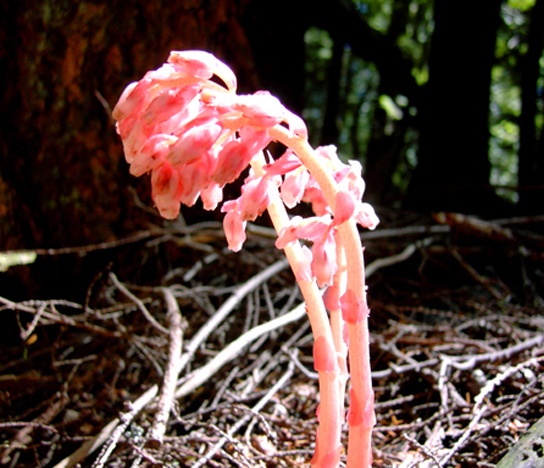 Saprophytes, like this Dutchmen’s pipe (Monotropa hypopitys), obtain their food from dead matter and do not have chlorophyll. (credit: modification of work by Iwona Erskine-Kellie)