The vestibular system has some similarities with the auditory system. It utilizes hair cells just like the auditory system, but it excites them in different ways. There are five vestibular receptor organs in the inner ear: the utricle, the saccule, and three semicircular canals. Together, they make up what’s known as the vestibular labyrinth that is shown in the figure below. The utricle and saccule respond to acceleration in a straight line, such as gravity.

The roughly 30,000 hair cells in the utricle and 16,000 hair cells in the saccule lie below a gelatinous layer, with their stereocilia projecting into the gelatin. Embedded in this gelatin are calcium carbonate crystals—like tiny rocks. When the head is tilted, the crystals continue to be pulled straight down by gravity, but the new angle of the head causes the gelatin to shift, thereby bending the stereocilia. The bending of the stereocilia stimulates the neurons, and they signal to the brain that the head is tilted, allowing the maintenance of balance. It is the vestibular branch of the vestibulocochlear cranial nerve that deals with balance. 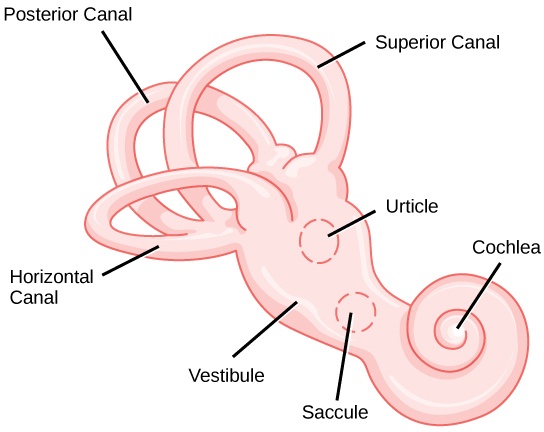 The structure of the vestibular labyrinth is shown. (credit: modification of work by NIH)

The fluid-filled semicircular canals are tubular loops set at oblique angles. They are arranged in three spatial planes. The base of each canal has a swelling that contains a cluster of hair cells. The hairs project into a gelatinous cap called the cupula and monitor angular acceleration and deceleration from rotation. They would be stimulated by driving your car around a corner, turning your head, or falling forward. One canal lies horizontally, while the other two lie at about 45 degree angles to the horizontal axis, as illustrated in the figure above. When the brain processes input from all three canals together, it can detect angular acceleration or deceleration in three dimensions. When the head turns, the fluid in the canals shifts, thereby bending stereocilia and sending signals to the brain.

Upon cessation accelerating or decelerating—or just moving—the movement of the fluid within the canals slows or stops. For example, imagine holding a glass of water. When moving forward, water may splash backwards onto the hand, and when motion has stopped, water may splash forward onto the fingers. While in motion, the water settles in the glass and does not splash. Note that the canals are not sensitive to velocity itself, but to changes in velocity, so moving forward at 60mph with your eyes closed would not give the sensation of movement, but suddenly accelerating or braking would stimulate the receptors.

Click through this interactive tutorial to review the parts of the ear and how they function to process sound.