The rods and cones are the site of transduction of light to a neural signal. Both rods and cones contain photopigments. In vertebrates, the main photopigment, rhodopsin, has two main parts (see the figure below): an opsin, which is a membrane protein (in the form of a cluster of α-helices that span the membrane), and retinal—a molecule that absorbs light. 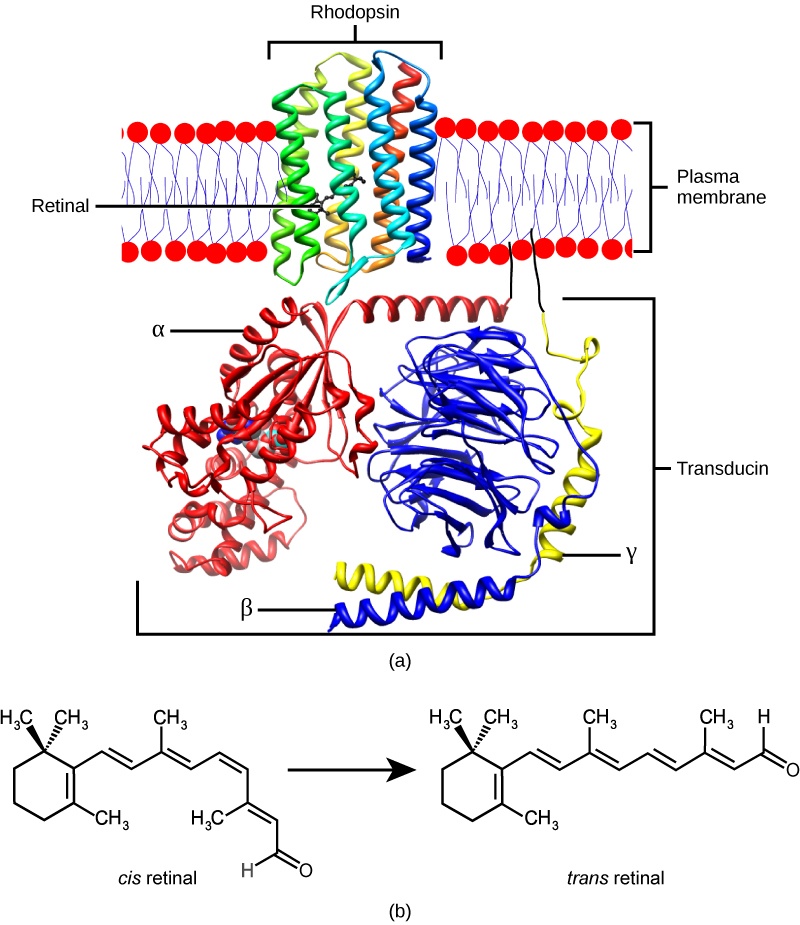 (a) Rhodopsin, the photoreceptor in vertebrates, has two parts: the trans-membrane protein opsin, and retinal. When light strikes retinal, it changes shape from (b) a cis to a trans form. The signal is passed to a G-protein called transducin, triggering a series of downstream events.

When light hits a photoreceptor, it causes a shape change in the retinal, altering its structure from a bent (cis) form of the molecule to its linear (trans) isomer. This isomerization of retinal activates the rhodopsin, starting a cascade of events that ends with the closing of Na+ channels in the membrane of the photoreceptor. Thus, unlike most other sensory neurons (which become depolarized by exposure to a stimulus) visual receptors become hyperpolarized and thus driven away from threshold (see the figure below). 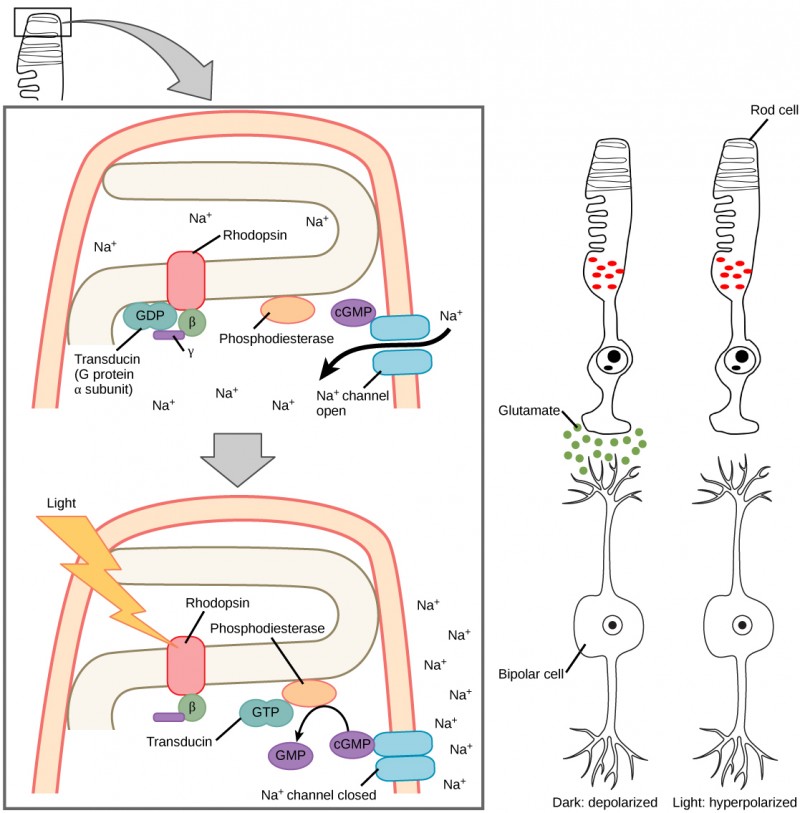 When light strikes rhodopsin, the G-protein transducin is activated, which in turn activates phosphodiesterase. Phosphodiesterase converts cGMP to GMP, thereby closing sodium channels. As a result, the membrane becomes hyperpolarized. The hyperpolarized membrane does not release glutamate to the bipolar cell

There are three types of cones (with different photopsins), and they differ in the wavelength to which they are most responsive, as shown in the figure below. Some cones are maximally responsive to short light waves of 420 nm, so they are called S cones (“S” for “short”); others respond maximally to waves of 530 nm (M cones, for “medium”); a third group responds maximally to light of longer wavelengths, at 560 nm (L, or “long” cones). With only one type of cone, color vision would not be possible, and a two-cone (dichromatic) system has limitations. Primates use a three-cone (trichromatic) system, resulting in full color vision.

The color we perceive is a result of the ratio of activity of our three types of cones. The colors of the visual spectrum, running from long-wavelength light to short, are red (700 nm), orange (600 nm), yellow (565 nm), green (497 nm), blue (470 nm), indigo (450 nm), and violet (425 nm). Humans have very sensitive perception of color and can distinguish about 500 levels of brightness, 200 different hues, and 20 steps of saturation, or about 2 million distinct colors. 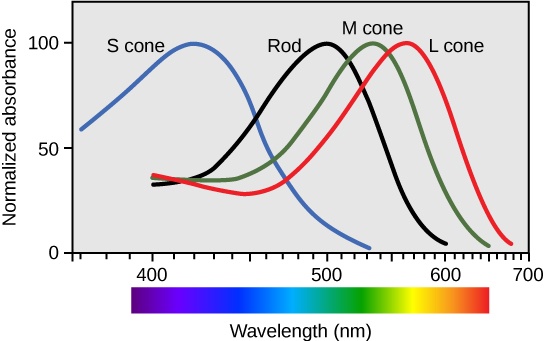 Human rod cells and the different types of cone cells each have an optimal wavelength. However, there is considerable overlap in the wavelengths of light detected.

Photoreceptors in the retina continuously undergo tonic activity. That is, they are always slightly active even when not stimulated by light. In neurons that exhibit tonic activity, the absence of stimuli maintains a firing rate at a baseline; while some stimuli increase firing rate from the baseline, and other stimuli decrease firing rate. In the absence of light, the bipolar neurons that connect rods and cones to ganglion cells are continuously and actively inhibited by the rods and cones. Exposure of the retina to light hyperpolarizes the rods and cones and removes their inhibition of bipolar cells. The now active bipolar cells in turn stimulate the ganglion cells, which send action potentials along their axons (which leave the eye as the optic nerve).

Thus, the visual system relies on change in retinal activity, rather than the absence or presence of activity, to encode visual signals for the brain. Sometimes horizontal cells carry signals from one rod or cone to other photoreceptors and to several bipolar cells. When a rod or cone stimulates a horizontal cell, the horizontal cell inhibits more distant photoreceptors and bipolar cells, creating lateral inhibition. This inhibition sharpens edges and enhances contrast in the images by making regions receiving light appear lighter and dark surroundings appear darker. Amacrine cells can distribute information from one bipolar cell to many ganglion cells.

You can demonstrate this using an easy demonstration to “trick” your retina and brain about the colors you are observing in your visual field. Look fixedly at the figure below for about 45 seconds. Then quickly shift your gaze to a sheet of blank white paper or a white wall. You should see an afterimage of the Norwegian flag in its correct colors. At this point, close your eyes for a moment, then reopen them, looking again at the white paper or wall; the afterimage of the flag should continue to appear as red, white, and blue. 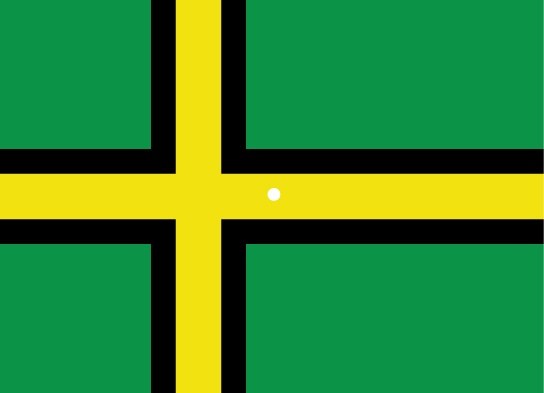 View this flag to understand how retinal processing works. Stare at the center of the flag (indicated by the white dot) for 45 seconds, and then quickly look at a white background, noticing how colors appear.

What causes this? According to an explanation called opponent process theory, as you gazed fixedly at the green, black, and yellow flag, your retinal ganglion cells that respond positively to green, black, and yellow increased their firing dramatically. When you shifted your gaze to the neutral white ground, these ganglion cells abruptly decreased their activity and the brain interpreted this abrupt downshift as if the ganglion cells were responding now to their “opponent” colors: red, white, and blue, respectively, in the visual field. Once the ganglion cells return to their baseline activity state, the false perception of color will disappear.