Audition, or hearing, is important to humans and to other animals for many different interactions. It enables an organism to detect and receive information about danger, such as an approaching predator, and to participate in communal exchanges like those concerning territories or mating. On the other hand, although it is physically linked to the auditory system, the vestibular system is not involved in hearing. Instead, an animal’s vestibular system detects its own movement, both linear and angular acceleration and deceleration, and balance.

Auditory stimuli are sound waves, which are mechanical, pressure waves that move through a medium, such as air or water. There are no sound waves in a vacuum since there are no air molecules to move in waves. The speed of sound waves differs, based on altitude, temperature, and medium, but at sea level and a temperature of 20º C (68º F), sound waves travel in the air at about 343 meters per second.

As is true for all waves, there are four main characteristics of a sound wave: frequency, wavelength, period, and amplitude. Frequency is the number of waves per unit of time, and in sound is heard as pitch. High-frequency (≥15.000Hz) sounds are higher-pitched (short wavelength) than low-frequency (long wavelengths; ≤100Hz) sounds. Frequency is measured in cycles per second, and for sound, the most commonly used unit is hertz (Hz), or cycles per second. Most humans can perceive sounds with frequencies between 30 and 20,000 Hz. Women are typically better at hearing high frequencies, but everyone’s ability to hear high frequencies decreases with age. Dogs detect up to about 40,000 Hz; cats, 60,000 Hz; bats, 100,000 Hz; and dolphins 150,000 Hz, and American shad (Alosa sapidissima), a fish, can hear 180,000 Hz. Those frequencies above the human range are called ultrasound.

Amplitude, or the dimension of a wave from peak to trough, in sound is heard as volume and is illustrated in the figure below. The sound waves of louder sounds have greater amplitude than those of softer sounds. For sound, volume is measured in decibels (dB). The softest sound that a human can hear is the zero point. Humans speak normally at 60 decibels. 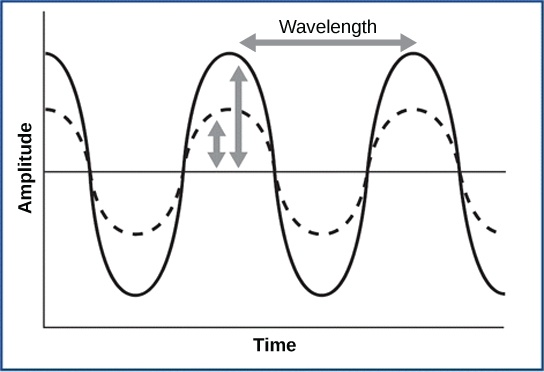