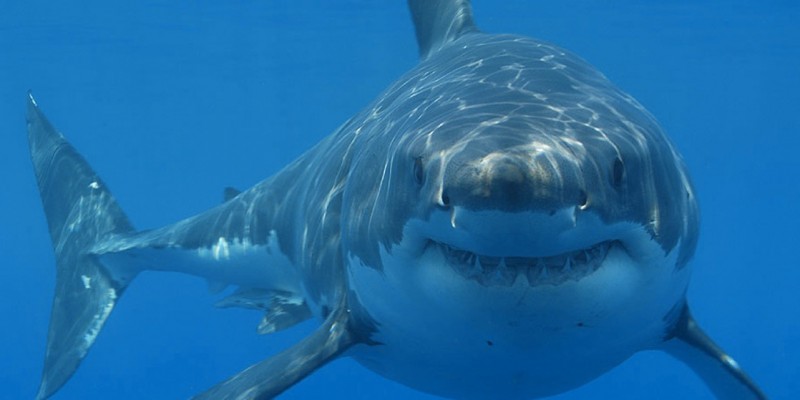 This shark uses its senses of sight, vibration (lateral-line system), and smell to hunt, but it also relies on its ability to sense the electric fields of prey, a sense not present in most land animals. (credit: modification of work by Hermanus Backpackers Hostel, South Africa)

In more advanced animals, the senses are constantly at work, making the animal aware of stimuli—such as light, or sound, or the presence of a chemical substance in the external environment—and monitoring information about the organism’s internal environment. All bilaterally symmetric animals have a sensory system, and the development of any species’ sensory system has been driven by natural selection; thus, sensory systems differ among species according to the demands of their environments. The shark, unlike most fish predators, is electrosensitive—that is, sensitive to electrical fields produced by other animals in its environment. While it is helpful to this underwater predator, electrosensitivity is a sense not found in most land animals.

Senses provide information about the body and its environment. Humans have five special senses: olfaction (smell), gustation (taste), equilibrium (balance and body position), vision, and hearing. Additionally, we possess general senses, also called somatosensation, which respond to stimuli like temperature, pain, pressure, and vibration. Vestibular sensation, which is an organism’s sense of spatial orientation and balance, proprioception (position of bones, joints, and muscles), and the sense of limb position that is used to track kinesthesia (limb movement) are part of somatosensation. Although the sensory systems associated with these senses are very different, all share a common function: to convert a stimulus (such as light, or sound, or the position of the body) into an electrical signal in the nervous system. This process is called sensory transduction.

There are two broad types of cellular systems that perform sensory transduction. In one, a neuron works with a sensory receptor, a cell, or cell process that is specialized to engage with and detect a specific stimulus. Stimulation of the sensory receptor activates the associated afferent neuron, which carries information about the stimulus to the central nervous system. In the second type of sensory transduction, a sensory nerve ending responds to a stimulus in the internal or external environment: this neuron constitutes the sensory receptor. Free nerve endings can be stimulated by several different stimuli, thus showing little receptor specificity. For example, pain receptors in your gums and teeth may be stimulated by temperature changes, chemical stimulation, or pressure.