Odorants (odor molecules) enter the nose and dissolve in the olfactory epithelium, the mucosa at the back of the nasal cavity (as illustrated in the figure below). The olfactory epithelium is a collection of specialized olfactory receptors in the back of the nasal cavity that spans an area about 5 cm2 in humans. Recall that sensory cells are neurons. An olfactory receptor, which is a dendrite of a specialized neuron, responds when it binds certain molecules inhaled from the environment by sending impulses directly to the olfactory bulb of the brain. Humans have about 12 million olfactory receptors, distributed among hundreds of different receptor types that respond to different odors. Twelve million seems like a large number of receptors, but compare that to other animals: rabbits have about 100 million, most dogs have about 1 billion, and bloodhounds—dogs selectively bred for their sense of smell—have about 4 billion. The overall size of the olfactory epithelium also differs between species, with that of bloodhounds, for example, being many times larger than that of humans.

Olfactory neurons are bipolar neurons (neurons with two processes from the cell body). Each neuron has a single dendrite buried in the olfactory epithelium, and extending from this dendrite are 5 to 20 receptor-laden, hair-like cilia that trap odorant molecules. The sensory receptors on the cilia are proteins, and it is the variations in their amino acid chains that make the receptors sensitive to different odorants. Each olfactory sensory neuron has only one type of receptor on its cilia, and the receptors are specialized to detect specific odorants, so the bipolar neurons themselves are specialized. When an odorant binds with a receptor that recognizes it, the sensory neuron associated with the receptor is stimulated. Olfactory stimulation is the only sensory information that directly reaches the cerebral cortex, whereas other sensations are relayed through the thalamus. 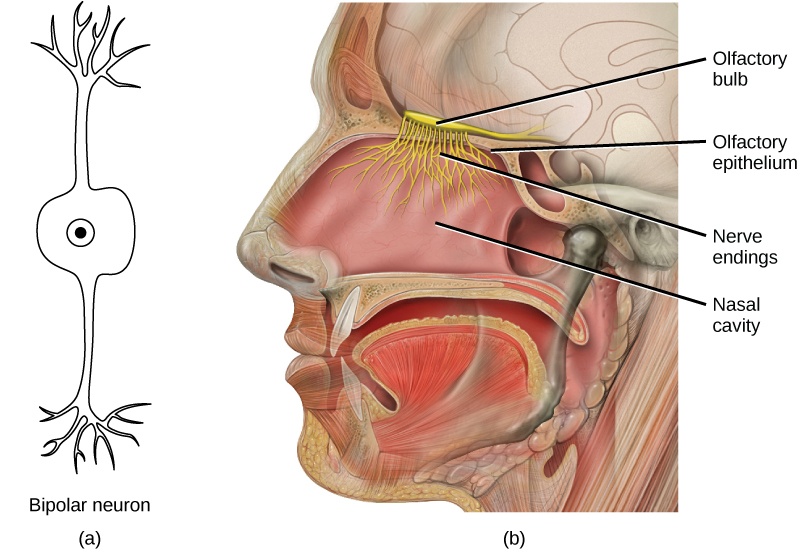 In the human olfactory system, (a) bipolar olfactory neurons extend from (b) the olfactory epithelium, where olfactory receptors are located, to the olfactory bulb. (credit: modification of work by Patrick J. Lynch, medical illustrator; C. Carl Jaffe, MD, cardiologist)

A pheromone is a chemical released by an animal that affects the behavior or physiology of animals of the same species. Pheromonal signals can have profound effects on animals that inhale them, but pheromones apparently are not consciously perceived in the same way as other odors. There are several different types of pheromones, which are released in urine or as glandular secretions. Certain pheromones are attractants to potential mates, others are repellants to potential competitors of the same sex, and still others play roles in mother-infant attachment. Some pheromones can also influence the timing of puberty, modify reproductive cycles, and even prevent embryonic implantation. While the roles of pheromones in many nonhuman species are important, pheromones have become less important in human behavior over evolutionary time compared to their importance to organisms with more limited behavioral repertoires.

The vomeronasal organ (VNO, or Jacobson’s organ) is a tubular, fluid-filled, olfactory organ present in many vertebrate animals that sits adjacent to the nasal cavity. It is very sensitive to pheromones and is connected to the nasal cavity by a duct. When molecules dissolve in the mucosa of the nasal cavity, they then enter the VNO where the pheromone molecules among them bind with specialized pheromone receptors. Upon exposure to pheromones from their own species or others, many animals, including cats, may display the flehmen response (shown in the figure below), a curling of the upper lip that helps pheromone molecules enter the VNO.

Pheromonal signals are sent, not to the main olfactory bulb, but to a different neural structure that projects directly to the amygdala (recall that the amygdala is a brain center important in emotional reactions, such as fear). The pheromonal signal then continues to areas of the hypothalamus that are key to reproductive physiology and behavior. While some scientists assert that the VNO is apparently functionally vestigial in humans, even though there is a similar structure located near human nasal cavities, others are researching it as a possible functional system that may, for example, contribute to synchronization of menstrual cycles in women living in close proximity. 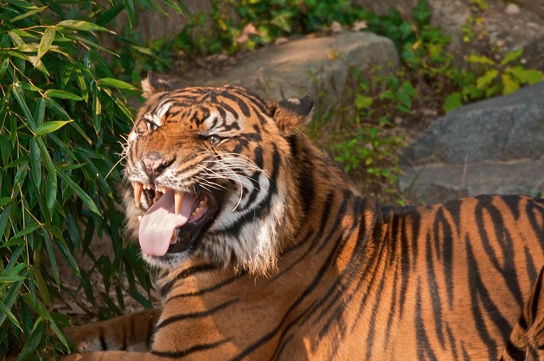 The flehmen response in this tiger results in the curling of the upper lip and helps airborne pheromone molecules enter the vomeronasal organ. (credit: modification of work by “chadh”/Flickr)

Detecting a taste (gustation) is fairly similar to detecting an odor (olfaction), given that both taste and smell rely on chemical receptors being stimulated by certain molecules. The primary organ of taste is the taste bud. A taste bud is a cluster of gustatory receptors (taste cells) that are located within the bumps on the tongue called papillae (singular: papilla) (illustrated in the figure below). There are several structurally distinct papillae. Filiform papillae, which are located across the tongue, are tactile, providing friction that helps the tongue move substances, and contain no taste cells. In contrast, fungiform papillae, which are located mainly on the anterior two-thirds of the tongue, each contain one to eight taste buds and also have receptors for pressure and temperature. The large circumvallate papillae contain up to 100 taste buds and form a V near the posterior margin of the tongue.

(a) Foliate, circumvallate, and fungiform papillae are located on different regions of the tongue. (b) Foliate papillae are prominent protrusions on this light micrograph. (credit a: modification of work by NCI; scale-bar data from Matt Russell)

Each taste bud’s taste cells are replaced every 10 to 14 days. These are elongated cells with hair-like processes called microvilli at the tips that extend into the taste bud pore (illustrate in the figure below). Food molecules (tastants) are dissolved in saliva, and they bind with and stimulate the receptors on the microvilli. The receptors for tastants are located across the outer portion and front of the tongue, outside of the middle area where the filiform papillae are most prominent. 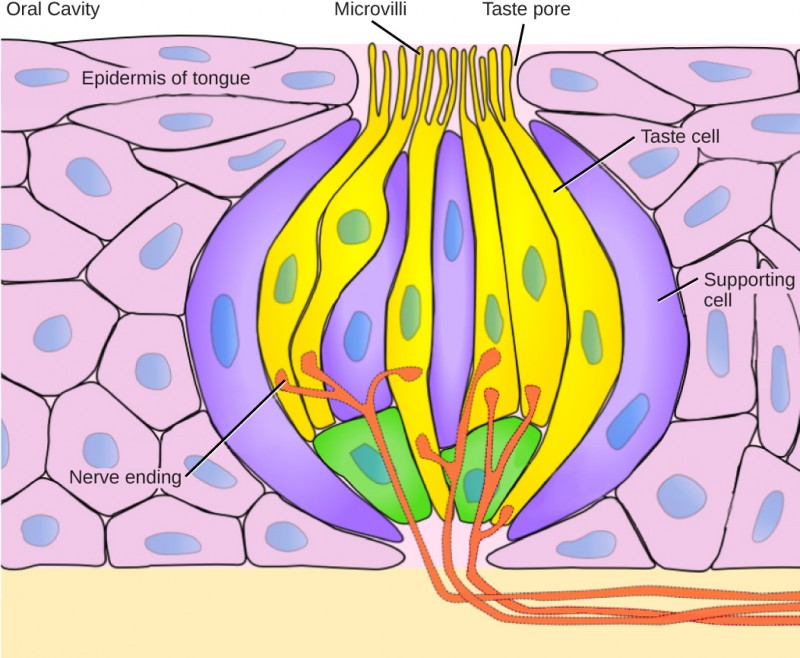 In humans, there are five primary tastes, and each taste has only one corresponding type of receptor. Thus, like olfaction, each receptor is specific to its stimulus (tastant). Transduction of the five tastes happens through different mechanisms that reflect the molecular composition of the tastant. A salty tastant (containing NaCl) provides the sodium ions (Na+) that enter the taste neurons and excite them directly. Sour tastants are acids and belong to the thermoreceptor protein family. Binding of an acid or other sour-tasting molecule triggers a change in the ion channel and these increase hydrogen ion (H+) concentrations in the taste neurons, thus depolarizing them. Sweet, bitter, and umami tastants require a G-protein coupled receptor. These tastants bind to their respective receptors, thereby exciting the specialized neurons associated with them.

Both tasting abilities and sense of smell change with age. In humans, the senses decline dramatically by age 50 and continue to decline. A child may find a food to be too spicy, whereas an elderly person may find the same food to be bland and unappetizing.