The first step in sensation is reception, which is the activation of sensory receptors by stimuli such as mechanical stimuli (being bent or squished, for example), chemicals, or temperature. The receptor can then respond to the stimuli. The region in space in which a given sensory receptor can respond to a stimulus, be it far away or in contact with the body, is that receptor’s receptivefield. Think for a moment about the differences in receptive fields for the different senses. For the sense of touch, a stimulus must come into contact with body. For the sense of hearing, a stimulus can be a moderate distance away (some baleen whale sounds can propagate for many kilometers). For vision, a stimulus can be very far away; for example, the visual system perceives light from stars at enormous distances.

The most fundamental function of a sensory system is the translation of a sensory signal to an electrical signal in the nervous system. This takes place at the sensory receptor, and the change in electrical potential that is produced is called the receptor potential. How is sensory input, such as pressure on the skin, changed to a receptor potential? In this example, a type of receptor called a mechanoreceptor (as shown in the figure below) possesses specialized membranes that respond to pressure. Disturbance of these dendrites by compressing them or bending them opens gated ion channels in the plasma membrane of the sensory neuron, changing its electrical potential. 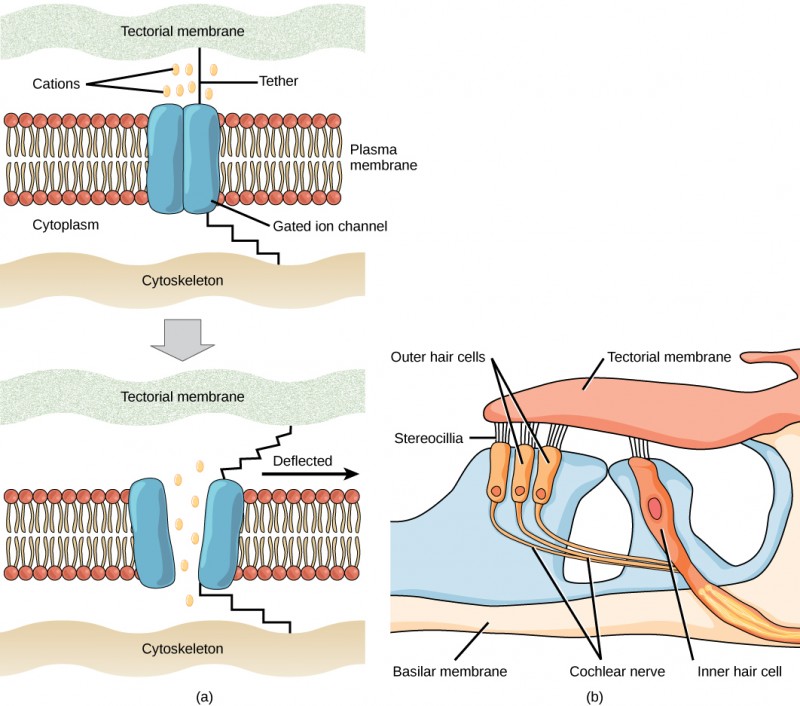 Sensory receptors for different senses are very different from each other, and they are specialized according to the type of stimulus they sense: they have receptor specificity. For example, touch receptors, light receptors, and sound receptors are each activated by different stimuli. Touch receptors are not sensitive to light or sound; they are sensitive only to touch or pressure. However, stimuli may be combined at higher levels in the brain, as happens with olfaction, contributing to our sense of taste.

Encoding and Transmission of Sensory Information