Flowers are modified leaves, or sporophylls, organized around a central stalk. Although they vary greatly in appearance, all flowers contain the same structures: sepals, petals, carpels, and stamens. The peduncle attaches the flower to the plant. A whorl of sepals (collectively called the calyx) is located at the base of the peduncle and encloses the unopened floral bud. Sepals are usually photosynthetic organs, although there are some exceptions. For example, the corolla in lilies and tulips consists of three sepals and three petals that look virtually identical. Petals, collectively the corolla, are located inside the whorl of sepals and often display vivid colors to attract pollinators. Flowers pollinated by wind are usually small, feathery, and visually inconspicuous. Sepals and petals together form the perianth. The sexual organs (carpels and stamens) are located at the center of the flower.

As illustrated in the figure below, styles, stigmas, and ovules constitute the female organ: the gynoecium or carpel. Flower structure is very diverse, and carpels may be singular, multiple, or fused. Multiple fused carpels comprise a pistil. The megaspores and the female gametophytes are produced and protected by the thick tissues of the carpel. A long, thin structure called a style leads from the sticky stigma, where pollen is deposited, to the ovary, enclosed in the carpel. The ovary houses one or more ovules, each of which will develop into a seed upon fertilization. The male reproductive organs, the stamens (collectively called the androecium), surround the central carpel. Stamens are composed of a thin stalk called a filament and a sac-like structure called the anther. The filament supports the anther, where the microspores are produced by meiosis and develop into pollen grains. 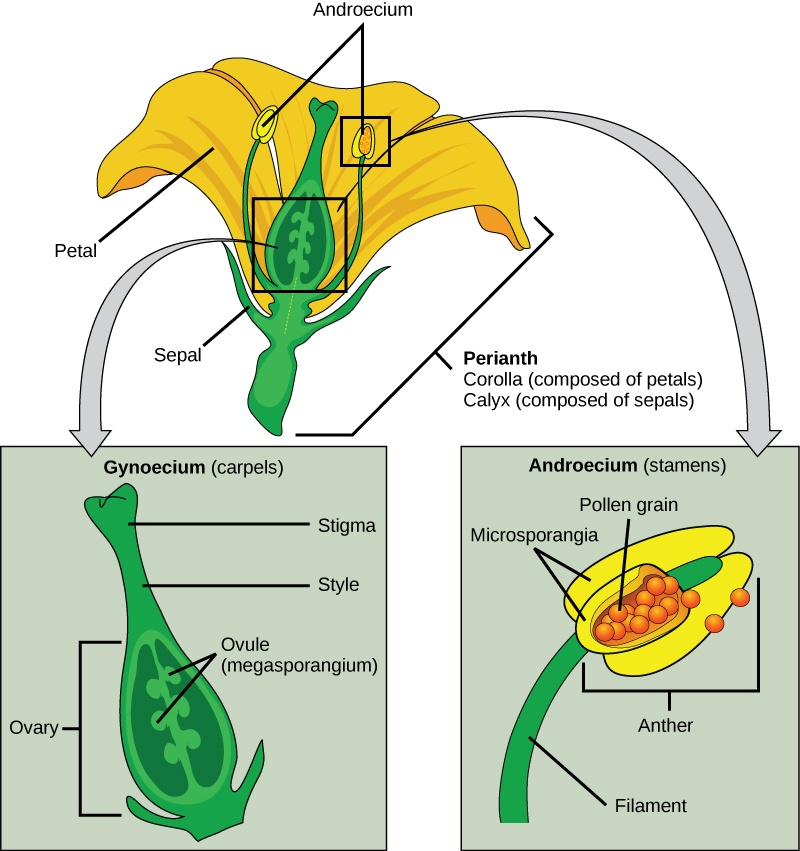 This image depicts the structure of a perfect flower. Perfect flowers produce both male and female floral organs. The flower shown has only one carpel, but some flowers have a cluster of carpels. Together, all the carpels make up the gynoecium. (credit: modification of work by Mariana Ruiz Villareal)