The fossil plant Elkinsia polymorpha, a “seed fern” from the Devonian period—about 400 million years ago—is considered the earliest seed plant known to date. Seed ferns (see the figure below) produced their seeds along their branches without specialized structures. What makes them the first true seed plants is that they developed structures called cupules to enclose and protect the ovule—the female gametophyte and associated tissues—which develops into a seed upon fertilization. Seed plants resembling modern tree ferns became more numerous and diverse in the coal swamps of the Carboniferous period. 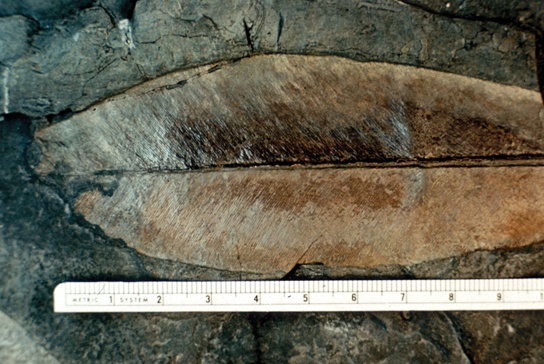 This fossilized leaf is from Glossopteris, a seed fern that thrived during the Permian age (290–240 million years ago). (credit: D.L. Schmidt, USGS)

Fossil records indicate the first gymnosperms (progymnosperms) most likely originated in the Paleozoic era, during the middle Devonian period: about 390 million years ago. Following the wet Mississippian and Pennsylvanian periods, which were dominated by giant fern trees, the Permian period was dry. This gave a reproductive edge to seed plants, which are better adapted to survive dry spells. The Ginkgoales, a group of gymnosperms with only one surviving species—the Gingko biloba—were the first gymnosperms to appear during the lower Jurassic.

Gymnosperms expanded in the Mesozoic era (about 240 million years ago), supplanting ferns in the landscape, and reaching their greatest diversity during this time. The Jurassic period was as much the age of the cycads (palm-tree-like gymnosperms) as the age of the dinosaurs. Gingkoales and the more familiar conifers also dotted the landscape. Although angiosperms (flowering plants) are the major form of plant life in most biomes, gymnosperms still dominate some ecosystems, such as the taiga (boreal forests) and the alpine forests at higher mountain elevations (see the figure below) because of their adaptation to cold and dry growth conditions. 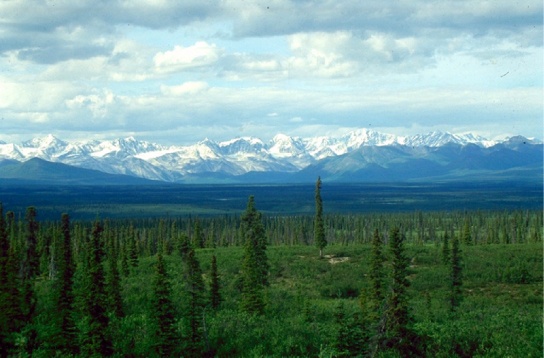 Seeds and Pollen as an Evolutionary Adaptation to Dry Land

Unlike bryophyte and fern spores (which are haploid cells dependent on moisture for rapid development of gametophytes), seeds contain a diploid embryo that will germinate into a sporophyte. Storage tissue to sustain growth and a protective coat give seeds their superior evolutionary advantage. Several layers of hardened tissue prevent desiccation, and free reproduction from the need for a constant supply of water. Furthermore, seeds remain in a state of dormancy—induced by desiccation and the hormone abscisic acid—until conditions for growth become favorable. Whether blown by the wind, floating on water, or carried away by animals, seeds are scattered in an expanding geographic range, thus avoiding competition with the parent plant.

Pollen grains (see the figure below) are male gametophytes and are carried by wind, water, or a pollinator. The whole structure is protected from desiccation and can reach the female organs without dependence on water. Male gametes reach female gametophyte and the egg cell gamete though a pollen tube: an extension of a cell within the pollen grain. The sperm of modern gymnosperms lack flagella, but in cycads and the Gingko, the sperm still possess flagella that allow them to swim down the pollen tube to the female gamete; however, they are enclosed in a pollen grain. 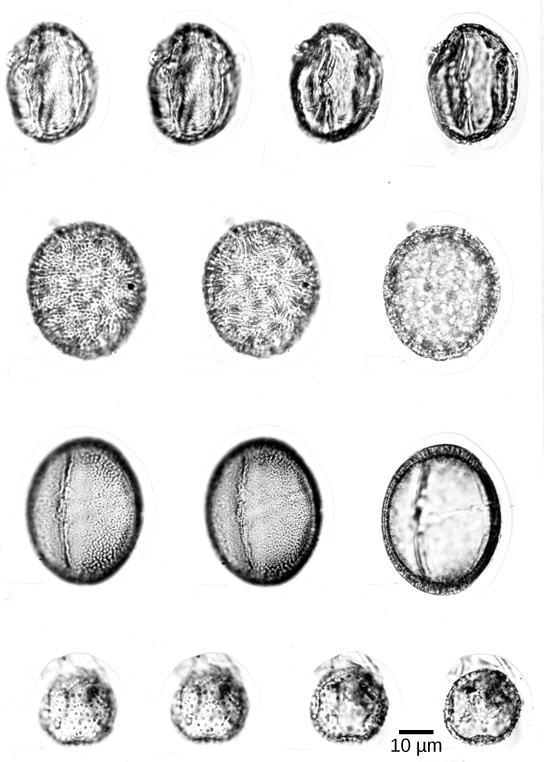