Undisputed fossil records place the massive appearance and diversification of angiosperms in the middle to late Mesozoic era. Angiosperms (“seed in a vessel”) produce a flower containing male and/or female reproductive structures. Fossil evidence (see the figure below) indicates that flowering plants first appeared in the Lower Cretaceous, about 125 million years ago, and were rapidly diversifying by the Middle Cretaceous, about 100 million years ago.

Earlier traces of angiosperms are scarce. Fossilized pollen recovered from Jurassic geological material has been attributed to angiosperms. A few early Cretaceous rocks show clear imprints of leaves resembling angiosperm leaves. By the mid-Cretaceous, a staggering number of diverse flowering plants crowd the fossil record. The same geological period is also marked by the appearance of many modern groups of insects, including pollinating insects that played a key role in ecology and the evolution of flowering plants.

Although several hypotheses have been offered to explain this sudden profusion and variety of flowering plants, none have garnered the consensus of paleobotanists (scientists who study ancient plants). New data in comparative genomics and paleobotany have, however, shed some light on the evolution of angiosperms. Rather than being derived from gymnosperms, angiosperms form a sister clade (a species and its descendents) that developed in parallel with the gymnosperms.

The two innovative structures of flowers and fruit represent an improved reproductive strategy that served to protect the embryo, while increasing genetic variability and range. Paleobotanists debate whether angiosperms evolved from small woody bushes, or were basal angiosperms related to tropical grasses. Both views draw support from cladistics studies, and the so-called woody magnoliid hypothesis—which proposes that the early ancestors of angiosperms were shrubs—also offers molecular biological evidence.

The most primitive living angiosperm is considered to be Amborella trichopoda, a small plant native to the rainforest of New Caledonia, an island in the South Pacific. Analysis of the genome of A. trichopoda has shown that it is related to all existing flowering plants and belongs to the oldest confirmed branch of the angiosperm family tree. A few other angiosperm groups called basal angiosperms, are viewed as primitive because they branched off early from the phylogenetic tree. Most modern angiosperms are classified as either monocots or eudicots, based on the structure of their leaves and embryos. Basal angiosperms, such as water lilies, are considered more primitive because they share morphological traits with both monocots and eudicots. 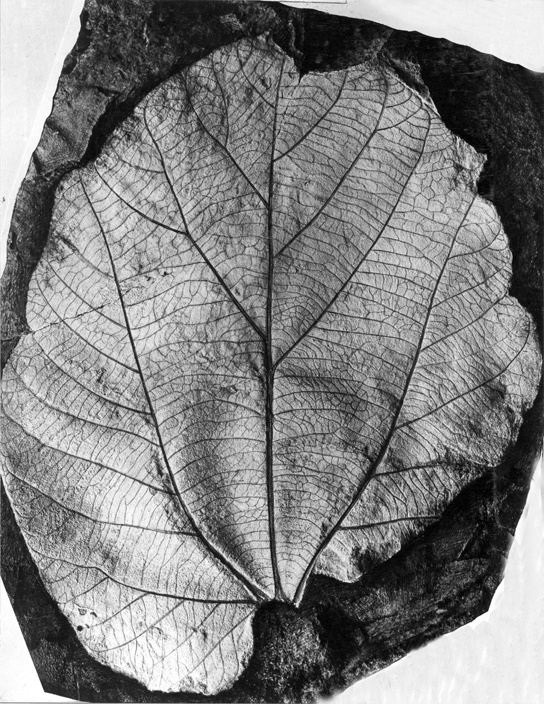 This leaf imprint shows a Ficus speciosissima, an angiosperm that flourished during the Cretaceous period. (credit: W. T. Lee, USGS)

Flowers and Fruits as an Evolutionary Adaptation

Angiosperms produce their gametes in separate organs, which are usually housed in a flower. Both fertilization and embryo development take place inside an anatomical structure that provides a stable system of sexual reproduction largely sheltered from environmental fluctuations. Flowering plants are the most diverse phylum on Earth after insects; flowers come in a bewildering array of sizes, shapes, colors, smells, and arrangements. Most flowers have a mutualistic pollinator, with the distinctive features of flowers reflecting the nature of the pollination agent. The relationship between pollinator and flower characteristics is one of the great examples of coevolution.

Following fertilization of the egg, the ovule grows into a seed. The surrounding tissues of the ovary thicken, developing into a fruit that will protect the seed and often ensure its dispersal over a wide geographic range. Not all fruits develop from an ovary; such structures are “false fruits.” Like flowers, fruit can vary tremendously in appearance, size, smell, and taste. Tomatoes, walnut shells and avocados are all examples of fruit. As with pollen and seeds, fruits also act as agents of dispersal. Some may be carried away by the wind. Many attract animals that will eat the fruit and pass the seeds through their digestive systems, then deposit the seeds in another location. Cockleburs are covered with stiff, hooked spines that can hook into fur (or clothing) and hitch a ride on an animal for long distances. The cockleburs that clung to the velvet trousers of an enterprising Swiss hiker, George de Mestral, inspired his invention of the loop and hook fastener he named Velcro.

All living organisms display patterns of relationships derived from their evolutionary history. Phylogeny is the science that describes the relative connections between organisms, in terms of ancestral and descendant species. Phylogenetic trees, such as the plant evolutionary history shown in the figure below, are tree-like branching diagrams that depict these relationships. Species are found at the tips of the branches. Each branching point, called a node, is the point at which a single taxonomic group (taxon), such as a species, separates into two or more species. 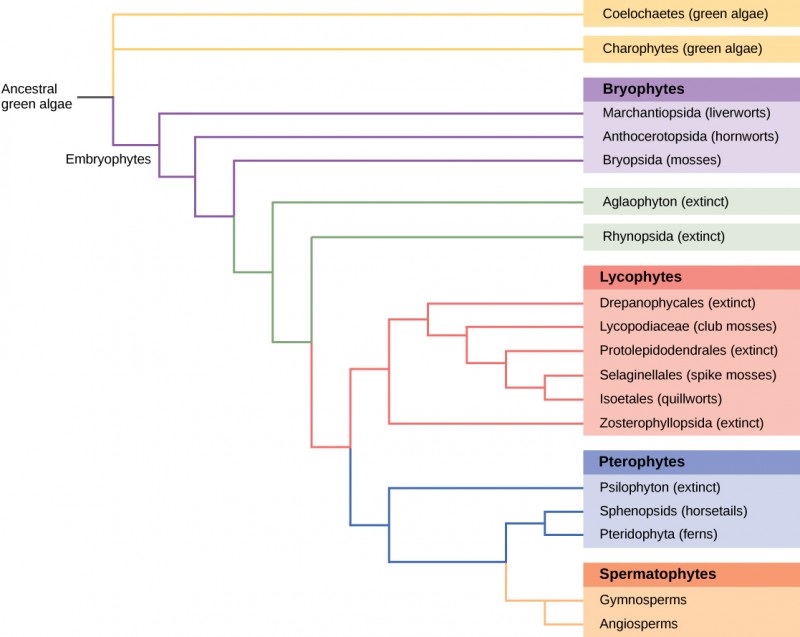 This phylogenetic tree shows the evolutionary relationships of plants.

Phylogenetic trees have been built to describe the relationships between species since Darwin’s time. Traditional methods involve comparison of homologous anatomical structures and embryonic development, assuming that closely related organisms share anatomical features during embryo development. Some traits that disappear in the adult are present in the embryo; for example, a human fetus, at one point, has a tail. The study of fossil records shows the intermediate stages that link an ancestral form to its descendants.

Most of these approaches are imprecise and lend themselves to multiple interpretations. As the tools of molecular biology and computational analysis have been developed and perfected in recent years, a new generation of tree-building methods has taken shape. The key assumption is that genes for essential proteins or RNA structures, such as the ribosomal RNA, are inherently conserved because mutations (changes in the DNA sequence) could compromise the survival of the organism.

DNA from minute amounts of living organisms or fossils can be amplified by polymerase chain reaction (PCR) and sequenced, targeting the regions of the genome that are most likely to be conserved between species. The genes encoding the ribosomal RNA from the small 18S subunit and plastid genes are frequently chosen for DNA alignment analysis.

Once the sequences of interest are obtained, they are compared with existing sequences in databases such as GenBank, which is maintained by The National Center for Biotechnology Information. A number of computational tools are available to align and analyze sequences. Sophisticated computer analysis programs determine the percentage of sequence identity or homology.

Sequence homology can be used to estimate the evolutionary distance between two DNA sequences and reflect the time elapsed since the genes separated from a common ancestor. Molecular analysis has revolutionized phylogenetic trees. In some cases, prior results from morphological studies have been confirmed: for example, confirming Amborella trichopoda as the most primitive angiosperm known. However, some groups and relationships have been rearranged as a result of DNA analysis.