Modern gymnosperms are classified into four phyla. Coniferophyta, Cycadophyta, and Ginkgophyta are similar in their production of secondary cambium (cells that generate the vascular system of the trunk or stem and are partially specialized for water transportation) and their pattern of seed development. However, the three phyla are not closely related phylogenetically to each other. Gnetophyta are considered the closest group to angiosperms because they produce true xylem tissue.

Conifers are the dominant phylum of gymnosperms, with the most variety of species (see the figure below). Most are typically tall trees that usually bear scale-like or needle-like leaves. Water evaporation from leaves is reduced by their thin shape and the thick cuticle. Snow slides easily off needle-shaped leaves, keeping the load light and decreasing breaking of branches. Adaptations to cold and dry weather explain the predominance of conifers at high altitudes and in cold climates.

Conifers include familiar evergreen trees such as pines, spruces, firs, cedars, sequoias, and yews. A few species are deciduous and lose their leaves in fall. The European larch and the tamarack are examples of deciduous conifers (see figure (c) below). Many coniferous trees are harvested for paper pulp and timber. The wood of conifers is more primitive than the wood of angiosperms; it contains tracheids, but no vessel elements, and is therefore referred to as “soft wood.” 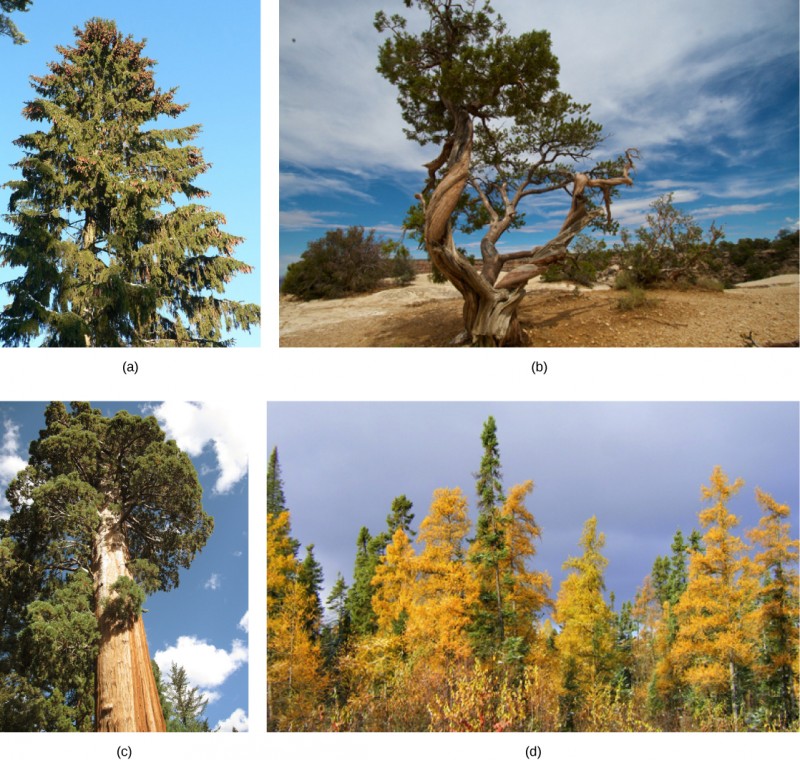 Cycads thrive in mild climates, and are often mistaken for palms because of the shape of their large, compound leaves. Cycads bear large cones (see the figure below), and may be pollinated by beetles rather than wind: unusual for a gymnosperm. They dominated the landscape during the age of dinosaurs in the Mesozoic, but only a hundred or so species persisted to modern times. They face possible extinction, and several species are protected through international conventions. Because of their attractive shape, they are often used as ornamental plants in gardens in the tropics and subtropics. 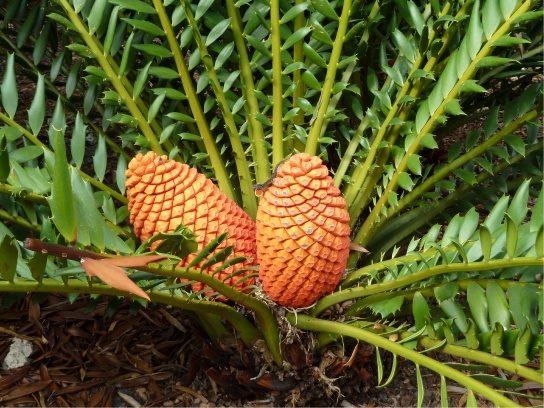 The single surviving species of the gingkophytes group is the Gingko biloba (see the figure below). Its fan-shaped leaves—unique among seed plants because they feature a dichotomous venation pattern—turn yellow in autumn and fall from the tree. For centuries, G. biloba was cultivated by Chinese Buddhist monks in monasteries, which ensured its preservation. It is planted in public spaces because it is unusually resistant to pollution. Male and female organs are produced on separate plants. Typically, gardeners plant only male trees because the seeds produced by the female plant have an off-putting smell of rancid butter. 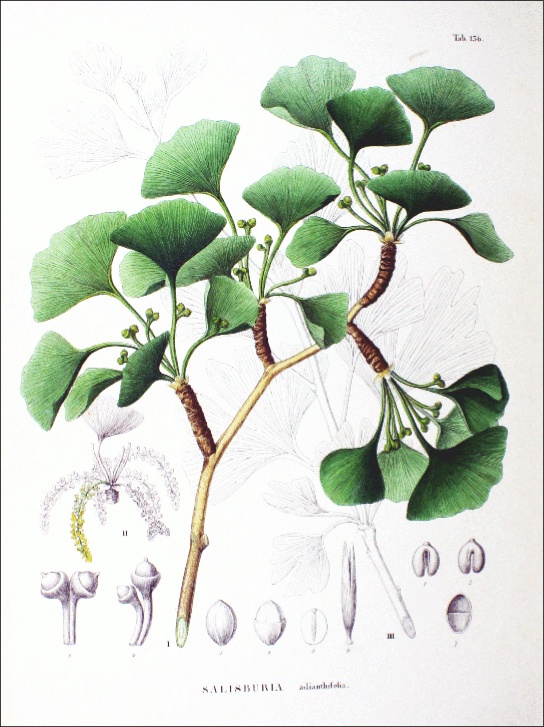 This plate from the 1870 book Flora Japonica, Sectio Prima (Tafelband) depicts the leaves and fruit of Gingko biloba, as drawn by Philipp Franz von Siebold and Joseph Gerhard Zuccarini.

Gnetophytes are the closest relative to modern angiosperms, and include three dissimilar genera of plants: Ephedra, Gnetum, and Welwitschia (see the figure below). Like angiosperms, they have broad leaves. In tropical and subtropical zones, gnetophytes are vines or small shrubs. Ephedra occurs in dry areas of the West Coast of the United States and Mexico. Ephedra’s small, scale-like leaves are the source of the compound ephedrine, which is used in medicine as a potent decongestant. Because ephedrine is similar to amphetamines, both in chemical structure and neurological effects, its use is restricted to prescription drugs. Like angiosperms, but unlike other gymnosperms, all gnetophytes possess vessel elements in their xylem.

You can watch this BBC video describing the amazing strangeness of Welwitschia.