Angiosperms are classified in a single phylum: the Anthophyta. Modern angiosperms appear to be a monophyletic group, which means that they originate from a single ancestor. Flowering plants are divided into two major groups, according to the structure of the cotyledons, pollen grains, and other structures. Monocots include grasses and lilies, and eudicots or dicots form a polyphyletic group. Basal angiosperms are a group of plants that are believed to have branched off before the separation into monocots and eudicots because they exhibit traits from both groups. They are categorized separately in many classification schemes. The Magnoliidae (magnolia trees, laurels, and water lilies) and the Piperaceae (peppers) belong to the basal angiosperm group.

The Magnoliidae are represented by the magnolias: tall trees bearing large, fragrant flowers that have many parts and are considered archaic (see figure (d) below). Laurel trees produce fragrant leaves and small, inconspicuous flowers. The Laurales grow mostly in warmer climates and are small trees and shrubs. Familiar plants in this group include the bay laurel, cinnamon, spice bush (see figure (a) below), and avocado tree.

The Nymphaeales are comprised of the water lilies, lotus (see figure (c) below), and similar plants; all species thrive in freshwater biomes, and have leaves that float on the water surface or grow underwater. Water lilies are particularly prized by gardeners, and have graced ponds and pools for thousands of years. The Piperales are a group of herbs, shrubs, and small trees that grow in the tropical climates. They have small flowers without petals that are tightly arranged in long spikes. Many species are the source of prized fragrance or spices, for example the berries of Piper nigrum (see figure (b) below) are the familiar black peppercorns that are used to flavor many dishes. 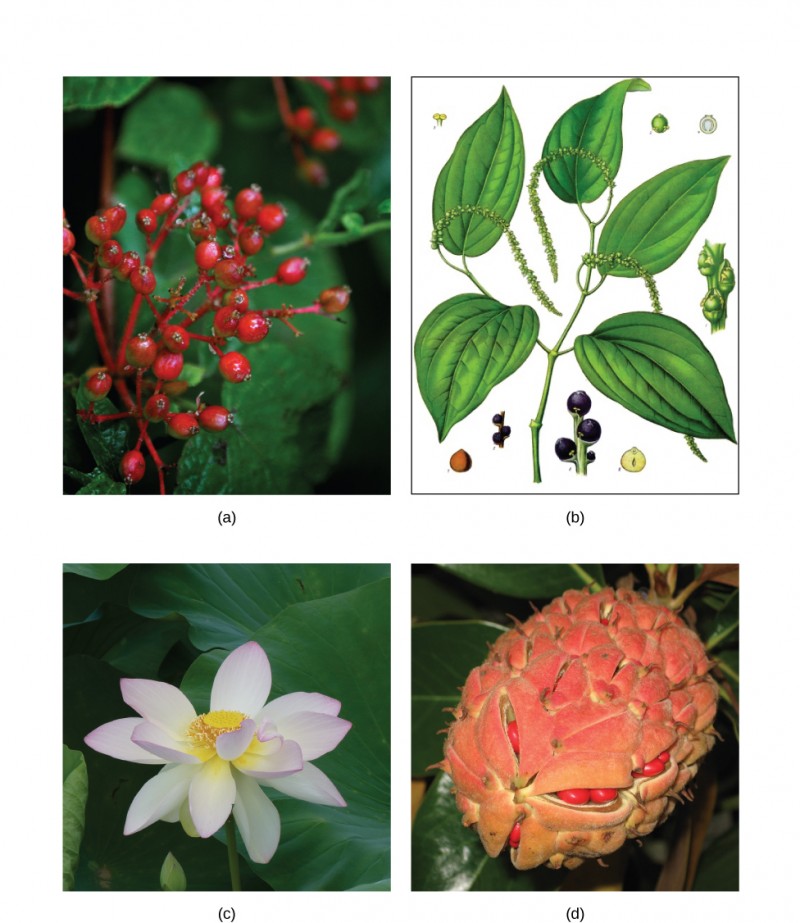 Plants in the monocot group are primarily identified as such by the presence of a single cotyledon in the seedling. Other anatomical features shared by monocots include veins that run parallel to the length of the leaves, and flower parts that are arranged in a three- or six-fold symmetry. True woody tissue is rarely found in monocots. In palm trees, vascular and parenchyma tissues produced by the primary and secondary thickening meristems form the trunk. The pollen from the first angiosperms was monosulcate, containing a single furrow or pore through the outer layer.

This feature is still seen in the modern monocots. Vascular tissue of the stem is not arranged in any particular pattern. The root system is mostly adventitious and unusually positioned, with no major tap root. The monocots include familiar plants such as the true lilies (which are at the origin of their alternate name of Liliopsida), orchids, grasses, and palms. Many important crops are monocots, such as rice and other cereals, corn, sugar cane, and tropical fruits like bananas and pineapples (see the figure below). 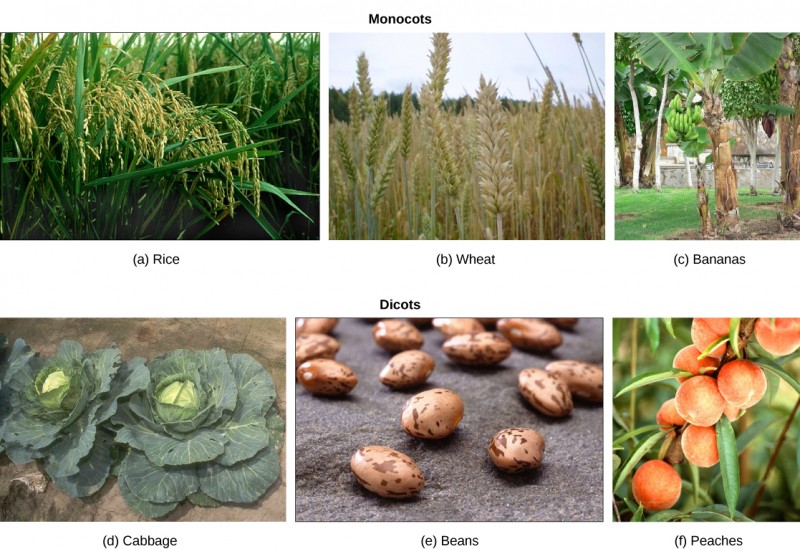 Eudicots, or true dicots, are characterized by the presence of two cotyledons in the developing shoot. Veins form a network in leaves, and flower parts come in four, five, or many whorls. Vascular tissue forms a ring in the stem; in monocots, vascular tissue is scattered in the stem. Eudicots can be herbaceous (like grasses), or produce woody tissues. Most eudicots produce pollen that is trisulcate or triporate, with three furrows or pores. The root system is usually anchored by one main root developed from the embryonic radicle. Eudicots comprise two-thirds of all flowering plants. The major differences between monocots and eudicots are summarized in the table below. Many species exhibit characteristics that belong to either group; as such, the classification of a plant as a monocot or a eudicot is not always clearly evident.