Grasses are a successful group of flowering plants that are wind pollinated. They produce large amounts of powdery pollen carried over large distances by the wind. The flowers are small and wisp-like. Large trees such as oaks, maples, and birches are also wind pollinated.

More than 80 percent of angiosperms depend on animals for pollination: the transfer of pollen from the anther to the stigma. Consequently, plants have developed many adaptations to attract pollinators. The specificity of specialized plant structures that target animals can be very surprising. It is possible, for example, to determine the type of pollinator favored by a plant just from the flower’s characteristics. Many bird or insect-pollinated flowers secrete nectar, which is a sugary liquid. They also produce both fertile pollen, for reproduction, and sterile pollen rich in nutrients for birds and insects. Butterflies and bees can detect ultraviolet light.

Flowers that attract these pollinators usually display a pattern of low ultraviolet reflectance that helps them quickly locate the flower’s center and collect nectar while being dusted with pollen (see the figure below). Large, red flowers with little smell and a long funnel shape are preferred by hummingbirds, who have good color perception, a poor sense of smell, and need a strong perch. White flowers opened at night attract moths. Other animals—such as bats, lemurs, and lizards—can also act as pollinating agents. Any disruption to these interactions, such as the disappearance of bees as a consequence of colony collapse disorders, can lead to disaster for agricultural industries that depend heavily on pollinated crops. 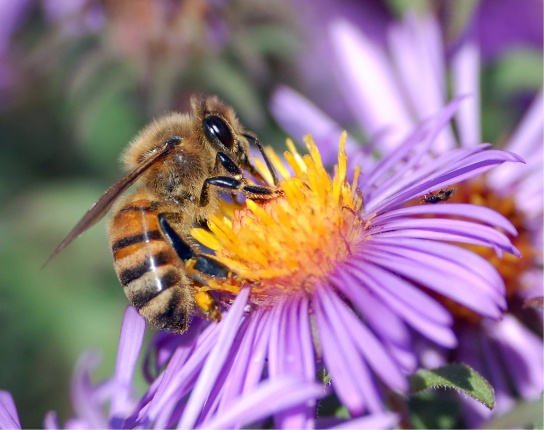 As a bee collects nectar from a flower, it is dusted by pollen, which it then disperses to other flowers. (credit: John Severns)

Question: Will flowers that offer cues to bees attract carrion flies if sprayed with compounds that smell like rotten flesh?

Background: Visitation of flowers by pollinating flies is a function mostly of smell. Flies are attracted by rotting flesh and carrions. The putrid odor seems to be the major attractant. The polyamines putrescine and cadaverine, which are the products of protein breakdown after animal death, are the source of the pungent smell of decaying meat. Some plants strategically attract flies by synthesizing polyamines similar to those generated by decaying flesh and thereby attract carrion flies.

Flies seek out dead animals because they normally lay their eggs on them and their maggots feed on the decaying flesh. Interestingly, time of death can be determined by a forensic entomologist based on the stages and type of maggots recovered from cadavers.

Hypothesis: Because flies are drawn to other organisms based on smell and not sight, a flower that is normally attractive to bees because of its colors will attract flies if it is sprayed with polyamines similar to those generated by decaying flesh.

Analyze your data: Review the data you have recorded. Average the number of visits that flies made to sprayed flowers over the course of the five trials (on the first flower type) and compare and contrast them to the average number of visits that flies made to the unsprayed/control flowers. Can you draw any conclusions regarding the attraction of the flies to the sprayed flowers?

Compare and contrast the average number of visits that flies made to the two flower types. Can you draw any conclusions about whether the appearance of the flower had any impact on the attraction of flies? Did smell override any appearance differences, or were the flies attracted to one flower type more than another?

Form a conclusion: Do the results support the hypothesis? If not, how can this be explained?