Mammalian lungs are located in the thoracic cavity where they are surrounded and protected by the rib cage, intercostal muscles, and bound by the chest wall. The bottom of the lungs is contained by the diaphragm, a skeletal muscle that facilitates breathing. Breathing requires the coordination of the lungs, the chest wall, and most importantly, the diaphragm.

Amphibians have evolved multiple ways of breathing. Young amphibians, like tadpoles, use gills to breathe, and they don’t leave the water. Some amphibians retain gills for life. As the tadpole grows, the gills disappear and lungs grow. These lungs are primitive and not as evolved as mammalian lungs. Adult amphibians are lacking or have a reduced diaphragm, so breathing via lungs is forced. The other means of breathing for amphibians is diffusion across the skin. To aid this diffusion, amphibian skin must remain moist.

Birds face a unique challenge with respect to breathing: They fly. Flying consumes a great amount of energy; therefore, birds require a lot of oxygen to aid their metabolic processes. Birds have evolved a respiratory system that supplies them with the oxygen needed to enable flying. Similar to mammals, birds have lungs, which are organs specialized for gas exchange. Oxygenated air, taken in during inhalation, diffuses across the surface of the lungs into the bloodstream, and carbon dioxide diffuses from the blood into the lungs and expelled during exhalation. The details of breathing between birds and mammals differ substantially.

In addition to lungs, birds have air sacs inside their body. Air flows in one direction from the posterior air sacs to the lungs and out of the anterior air sacs. The flow of air is in the opposite direction from blood flow, and gas exchange takes place much more efficiently. This type of breathing enables birds to obtain the requisite oxygen, even at higher altitudes where the oxygen concentration is low. This directionality of airflow requires two cycles of air intake and exhalation to completely get the air out of the lungs.

Decades of research by paleontologists have shown that birds evolved from therapods, meat-eating dinosaurs (see the figure below). In fact, fossil evidence shows that meat-eating dinosaurs that lived more than 100 million years ago had a similar flow-through respiratory system with lungs and air sacs. Archaeopteryx and Xiaotingia, for example, were flying dinosaurs and are believed to be early precursors of birds. 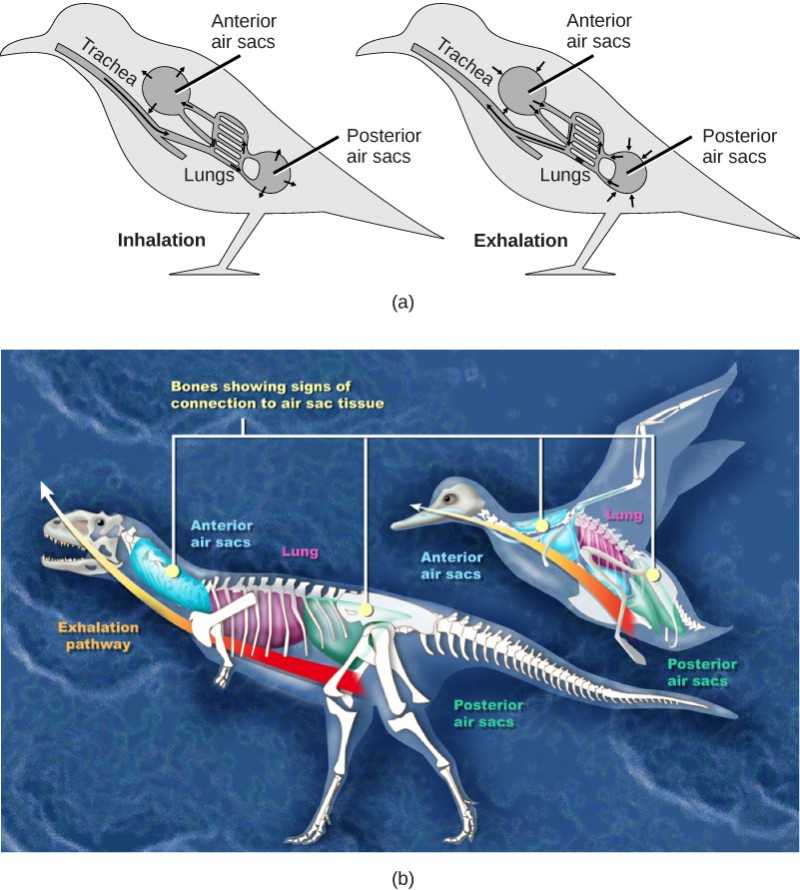 (a) Birds have a flow-through respiratory system in which air flows unidirectionally from the posterior sacs into the lungs, then into the anterior air sacs. The air sacs connect to openings in hollow bones. (b) Dinosaurs, from which birds descended, have similar hollow bones and are believed to have had a similar respiratory system. (credit b: modification of work by Zina Deretsky, National Science Foundation)

Most of us consider that dinosaurs are extinct. However, modern birds are descendants of avian dinosaurs. The respiratory system of modern birds has been evolving for hundreds of millions of years.

All mammals have lungs that are the main organs for breathing. Lung capacity has evolved to support the animal’s activities. During inhalation, the lungs expand with air, and oxygen diffuses across the lung’s surface and enters the bloodstream. During exhalation, the lungs expel air and lung volume decreases. In the next few sections, the process of human breathing will be explained.