Transport of Oxygen in the Blood

Transport of Oxygen in the Blood

Although oxygen dissolves in blood, only a small amount of oxygen is transported this way. Only 1.5 percent of oxygen in the blood is dissolved directly into the blood itself. Most oxygen—98.5 percent—is bound to a protein called hemoglobin and carried to the tissues.

Hemoglobin, or Hb, is a protein molecule found in red blood cells (erythrocytes) made of four subunits: two alpha subunits and two beta subunits (see the figure below). Each subunit surrounds a central heme group that contains iron and binds one oxygen molecule, allowing each hemoglobin molecule to bind four oxygen molecules. Molecules with more oxygen bound to the heme groups are brighter red. As a result, oxygenated arterial blood where the Hb is carrying four oxygen molecules is bright red, while venous blood that is deoxygenated is darker red.

The protein inside (a) red blood cells that carries oxygen to cells and carbon dioxide to the lungs is (b) hemoglobin. Hemoglobin is made up of four symmetrical subunits and four heme groups. Iron associated with the heme binds oxygen. It is the iron in hemoglobin that gives blood its red color.

It is easier to bind a second and third oxygen molecule to Hb than the first molecule. This is because the hemoglobin molecule changes its shape, or conformation, as oxygen binds. The fourth oxygen is then more difficult to bind. The binding of oxygen to hemoglobin can be plotted as a function of the partial pressure of oxygen in the blood (x-axis) versus the relative Hb-oxygen saturation (y-axis). The resulting graph—an oxygen dissociation curve—is sigmoidal, or S-shaped (see the figure below). As the partial pressure of oxygen increases, the hemoglobin becomes increasingly saturated with oxygen. 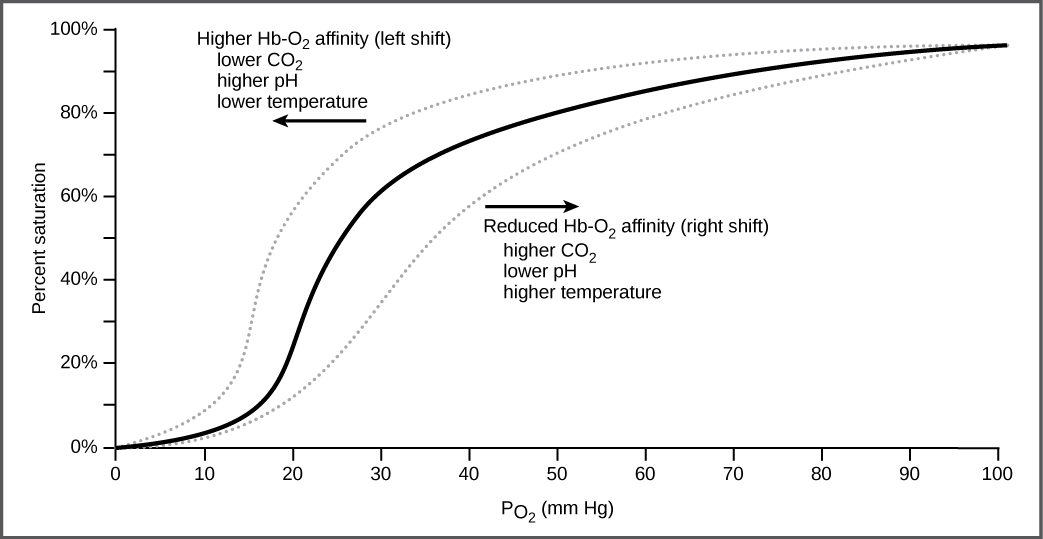 The oxygen dissociation curve demonstrates that, as the partial pressure of oxygen increases, more oxygen binds hemoglobin. However, the affinity of hemoglobin for oxygen may shift to the left or the right depending on environmental conditions.

The kidneys are responsible for removing excess H+ ions from the blood. If the kidneys fail, what would happen to blood pH and to hemoglobin affinity for oxygen?

The blood pH will drop and hemoglobin affinity for oxygen will decrease.

The oxygen-carrying capacity of hemoglobin determines how much oxygen is carried in the blood. In addition to \({\text{P}}_{{\text{O}}_{\text{2}}}\), other environmental factors and diseases can affect oxygen carrying capacity and delivery.

Carbon dioxide levels, blood pH, and body temperature affect oxygen-carrying capacity (see the figure above). When carbon dioxide is in the blood, it reacts with water to form bicarbonate \({\text{(HCO}}_{\text{3}}^{-}\text{)}\) and hydrogen ions (H+). As the level of carbon dioxide in the blood increases, more H+ is produced and the pH decreases. This increase in carbon dioxide and subsequent decrease in pH reduce the affinity of hemoglobin for oxygen. The oxygen dissociates from the Hb molecule, shifting the oxygen dissociation curve to the right. Therefore, more oxygen is needed to reach the same hemoglobin saturation level as when the pH was higher. A similar shift in the curve also results from an increase in body temperature. Increased temperature, such as from increased activity of skeletal muscle, causes the affinity of hemoglobin for oxygen to be reduced.

Diseases like sickle cell anemia and thalassemia decrease the blood’s ability to deliver oxygen to tissues and its oxygen-carrying capacity. In sickle cell anemia, the shape of the red blood cell is crescent-shaped, elongated, and stiffened, reducing its ability to deliver oxygen (see the figure below). In this form, red blood cells cannot pass through the capillaries. This is painful when it occurs. Thalassemia is a rare genetic disease caused by a defect in either the alpha or the beta subunit of Hb. Patients with thalassemia produce a high number of red blood cells, but these cells have lower-than-normal levels of hemoglobin. Therefore, the oxygen-carrying capacity is diminished. 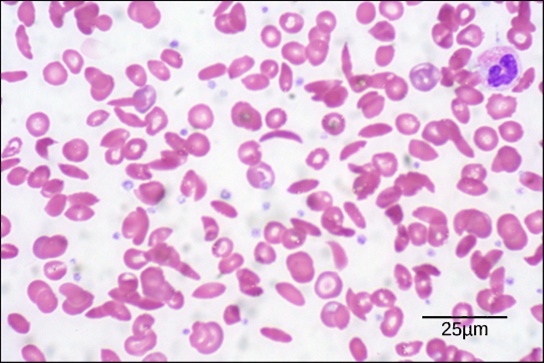