Transport of Carbon Dioxide in the Blood

Transport of Carbon Dioxide in the Blood

Third, the majority of carbon dioxide molecules (85 percent) are carried as part of the bicarbonate buffer system. In this system, carbon dioxide diffuses into the red blood cells. Carbonic anhydrase (CA) within the red blood cells quickly converts the carbon dioxide into carbonic acid (H2CO3). Carbonic acid is an unstable intermediate molecule that immediately dissociates into bicarbonate ions \({\text{(HCO}}_{\text{3}}^{-}\text{)}\) and hydrogen (H+) ions. Since carbon dioxide is quickly converted into bicarbonate ions, this reaction allows for the continued uptake of carbon dioxide into the blood down its concentration gradient. It also results in the production of H+ ions. If too much H+ is produced, it can alter blood pH. However, hemoglobin binds to the free H+ ions and thus limits shifts in pH.

The newly synthesized bicarbonate ion is transported out of the red blood cell into the liquid component of the blood in exchange for a chloride ion (Cl–); this is called the chloride shift. When the blood reaches the lungs, the bicarbonate ion is transported back into the red blood cell in exchange for the chloride ion. The H+ ion dissociates from the hemoglobin and binds to the bicarbonate ion. This produces the carbonic acid intermediate, which is converted back into carbon dioxide through the enzymatic action of CA. The carbon dioxide produced is expelled through the lungs during exhalation. 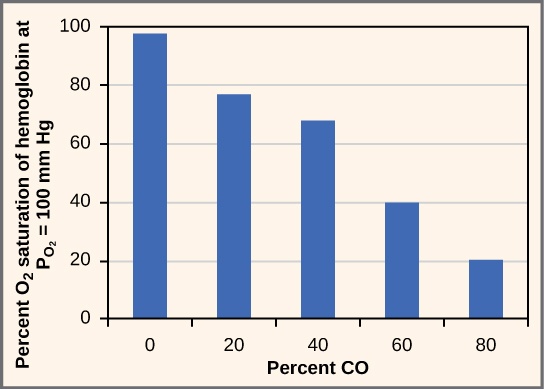 As percent CO increases, the oxygen saturation of hemoglobin decreases.