The Work of Breathing

The Work of Breathing

Surfactant works like a detergent to reduce the surface tension and allows for easier inflation of the airways. When a balloon is first inflated, it takes a large amount of effort to stretch the plastic and start to inflate the balloon. If a little bit of detergent was applied to the interior of the balloon, then the amount of effort or work needed to begin to inflate the balloon would decrease, and it would become much easier to start blowing up the balloon. This same principle applies to the airways. A small amount of surfactant to the airway tissues reduces the effort or work needed to inflate those airways. Babies born prematurely sometimes do not produce enough surfactant. As a result, they suffer from respiratory distress syndrome, because it requires more effort to inflate their lungs. Surfactant is also important for preventing collapse of small alveoli relative to large alveoli.

Pulmonary diseases reduce the rate of gas exchange into and out of the lungs. Two main causes of decreased gas exchange are compliance (how elastic the lung is) and resistance (how much obstruction exists in the airways). A change in either can dramatically alter breathing and the ability to take in oxygen and release carbon dioxide.

Examples of restrictive diseases are respiratory distress syndrome and pulmonary fibrosis. In both diseases, the airways are less compliant and they are stiff or fibrotic. There is a decrease in compliance because the lung tissue cannot bend and move. In these types of restrictive diseases, the intrapleural pressure is more positive and the airways collapse upon exhalation, which traps air in the lungs. Forced or functional vital capacity (FVC), which is the amount of air that can be forcibly exhaled after taking the deepest breath possible, is much lower than in normal patients, and the time it takes to exhale most of the air is greatly prolonged (see the figure below). A patient suffering from these diseases cannot exhale the normal amount of air.

Obstructive diseases and conditions include emphysema, asthma, and pulmonary edema. In emphysema, which mostly arises from smoking tobacco, the walls of the alveoli are destroyed, decreasing the surface area for gas exchange. The overall compliance of the lungs is increased, because as the alveolar walls are damaged, lung elastic recoil decreases due to a loss of elastic fibers, and more air is trapped in the lungs at the end of exhalation. Asthma is a disease in which inflammation is triggered by environmental factors. Inflammation obstructs the airways.

The obstruction may be due to edema (fluid accumulation), smooth muscle spasms in the walls of the bronchioles, increased mucus secretion, damage to the epithelia of the airways, or a combination of these events. Those with asthma or edema experience increased occlusion from increased inflammation of the airways. This tends to block the airways, preventing the proper movement of gases (see the figure below). Those with obstructive diseases have large volumes of air trapped after exhalation and breathe at a very high lung volume to compensate for the lack of airway recruitment. 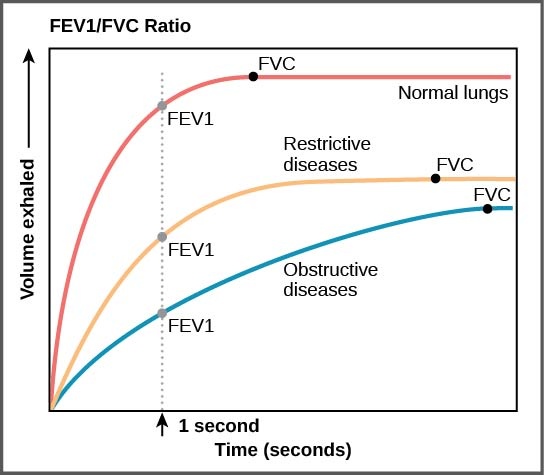