Earthworms and amphibians use their skin (integument) as a respiratory organ. A dense network of capillaries lies just below the skin and facilitates gas exchange between the external environment and the circulatory system. The respiratory surface must be kept moist in order for the gases to dissolve and diffuse across cell membranes.

Organisms that live in water need to obtain oxygen from the water. Oxygen dissolves in water but at a lower concentration than in the atmosphere. The atmosphere has roughly 21 percent oxygen. In water, the oxygen concentration is much smaller than that. Fish and many other aquatic organisms have evolved gills to take up the dissolved oxygen from water (see the figure below).

Gills are thin tissue filaments that are highly branched and folded. When water passes over the gills, the dissolved oxygen in water rapidly diffuses across the gills into the bloodstream. The circulatory system can then carry the oxygenated blood to the other parts of the body. In animals that contain coelomic fluid instead of blood, oxygen diffuses across the gill surfaces into the coelomic fluid. Gills are found in mollusks, annelids, and crustaceans. 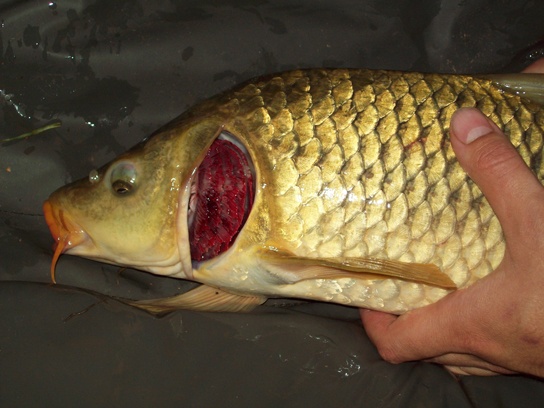 This common carp, like many other aquatic organisms, has gills that allow it to obtain oxygen from water. (credit: “Guitardude012″/Wikimedia Commons)

As water flows over the gills, oxygen is transferred to blood via the veins. (credit “fish”: modification of work by Duane Raver, NOAA)