In mammals, pulmonary ventilation occurs via inhalation (breathing). During inhalation, air enters the body through the nasal cavity located just inside the nose (see the figure below). As air passes through the nasal cavity, the air is warmed to body temperature and humidified. The respiratory tract is coated with mucus to seal the tissues from direct contact with air. Mucus is high in water. As air crosses these surfaces of the mucous membranes, it picks up water. These processes help equilibrate the air to the body conditions, reducing any damage that cold, dry air can cause. Particulate matter that is floating in the air is removed in the nasal passages via mucus and cilia. The processes of warming, humidifying, and removing particles are important protective mechanisms that prevent damage to the trachea and lungs. Thus, inhalation serves several purposes in addition to bringing oxygen into the respiratory system. 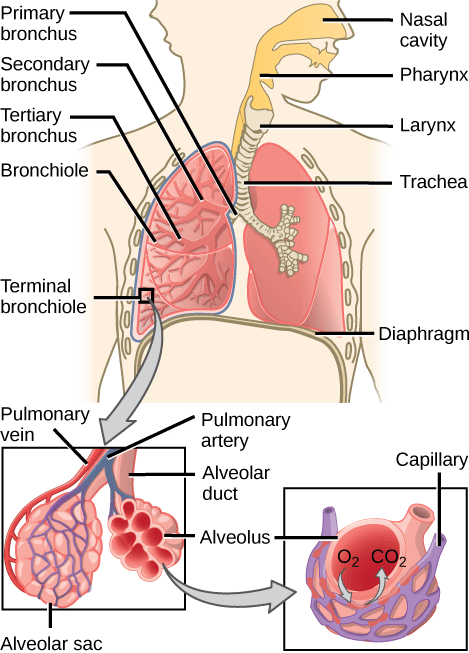 Air enters the respiratory system through the nasal cavity and pharynx, and then passes through the trachea and into the bronchi, which bring air into the lungs. (credit: modification of work by NCI)

Which of the following statements about the mammalian respiratory system is false?

The bronchioles branch into bronchi.

From the nasal cavity, air passes through the pharynx (throat) and the larynx (voice box), as it makes its way to the trachea (see the figure above). The main function of the trachea is to funnel the inhaled air to the lungs and the exhaled air back out of the body. The human trachea is a cylinder about 10 to 12 cm long and 2 cm in diameter that sits in front of the esophagus and extends from the larynx into the chest cavity where it divides into the two primary bronchi at the midthorax. It is made of incomplete rings of hyaline cartilage and smooth muscle (see the figure below).

The trachea is lined with mucus-producing goblet cells and ciliated epithelia. The cilia propel foreign particles trapped in the mucus toward the pharynx. The cartilage provides strength and support to the trachea to keep the passage open. The smooth muscle can contract, decreasing the trachea’s diameter, which causes expired air to rush upwards from the lungs at a great force. The forced exhalation helps expel mucus when we cough. Smooth muscle can contract or relax, depending on stimuli from the external environment or the body’s nervous system. 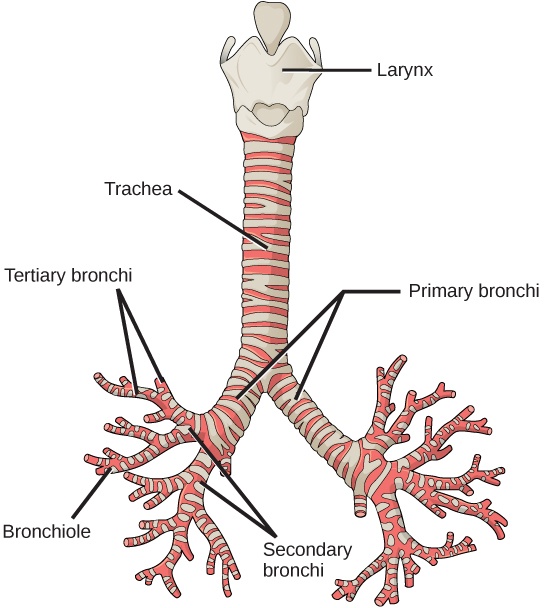 The trachea and bronchi are made of incomplete rings of cartilage. (credit: modification of work by Gray’s Anatomy)

The end of the trachea bifurcates (divides) to the right and left lungs. The lungs are not identical. The right lung is larger and contains three lobes, whereas the smaller left lung contains two lobes (see the figure below). The muscular diaphragm, which facilitates breathing, is inferior to (below) the lungs and marks the end of the thoracic cavity. 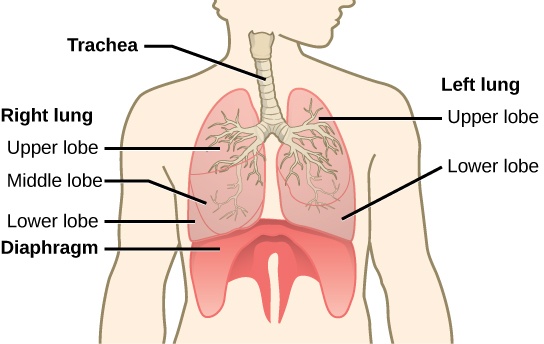 The trachea and bronchi are made of incomplete rings of cartilage. (credit: modification of work by Gray’s Anatomy)

In the lungs, air is diverted into smaller and smaller passages, or bronchi. Air enters the lungs through the two primary (main) bronchi (singular: bronchus). Each bronchus divides into secondary bronchi, then into tertiary bronchi, which in turn divide, creating smaller and smaller diameter bronchioles as they split and spread through the lung. Like the trachea, the bronchi are made of cartilage and smooth muscle. At the bronchioles, the cartilage is replaced with elastic fibers. Bronchi are innervated by nerves of both the parasympathetic and sympathetic nervous systems that control muscle contraction (parasympathetic) or relaxation (sympathetic) in the bronchi and bronchioles, depending on the nervous system’s cues. In humans, bronchioles with a diameter smaller than 0.5 mm are the respiratory bronchioles. They lack cartilage and therefore rely on inhaled air to support their shape. As the passageways decrease in diameter, the relative amount of smooth muscle increases.

The terminal bronchioles subdivide into microscopic branches called respiratory bronchioles. The respiratory bronchioles subdivide into several alveolar ducts. Numerous alveoli and alveolar sacs surround the alveolar ducts. The alveolar sacs resemble bunches of grapes tethered to the end of the bronchioles (see the figure below). In the acinar region, the alveolar ducts are attached to the end of each bronchiole. At the end of each duct are approximately 100 alveolar sacs, each containing 20 to 30 alveoli that are 200 to 300 microns in diameter. Gas exchange occurs only in alveoli. Alveoli are made of thin-walled parenchymal cells, typically one-cell thick, that look like tiny bubbles within the sacs. Alveoli are in direct contact with capillaries (one-cell thick) of the circulatory system. Such intimate contact ensures that oxygen will diffuse from alveoli into the blood and be distributed to the cells of the body.

In addition, the carbon dioxide that was produced by cells as a waste product will diffuse from the blood into alveoli to be exhaled. The anatomical arrangement of capillaries and alveoli emphasizes the structural and functional relationship of the respiratory and circulatory systems. Because there are so many alveoli (~300 million per lung) within each alveolar sac and so many sacs at the end of each alveolar duct, the lungs have a sponge-like consistency. This organization produces a very large surface area that is available for gas exchange. The surface area of alveoli in the lungs is approximately 75 m2. This large surface area, combined with the thin-walled nature of the alveolar parenchymal cells, allows gases to easily diffuse across the cells. 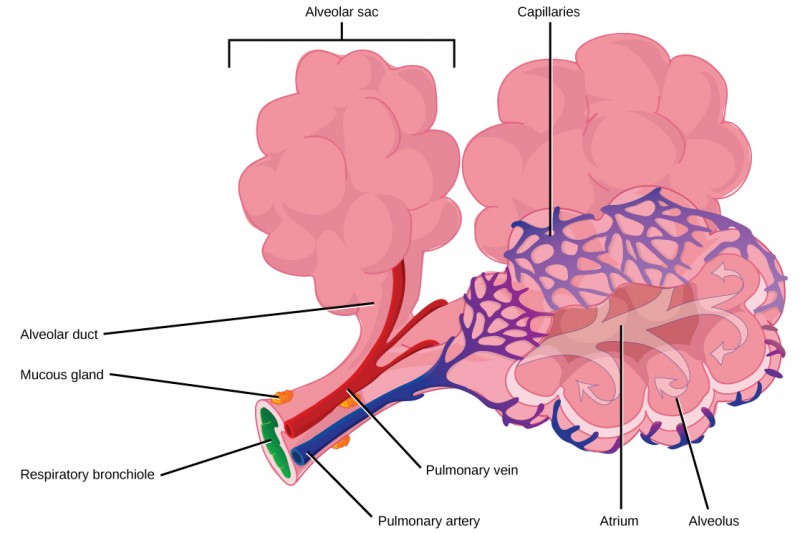 Terminal bronchioles are connected by respiratory bronchioles to alveolar ducts and alveolar sacs. Each alveolar sac contains 20 to 30 spherical alveoli and has the appearance of a bunch of grapes. Air flows into the atrium of the alveolar sac, then circulates into alveoli where gas exchange occurs with the capillaries. Mucous glands secrete mucous into the airways, keeping them moist and flexible. (credit: modification of work by Mariana Ruiz Villareal)

Watch the following video to review the respiratory system.