Plant Parasites and Agents of Decomposition 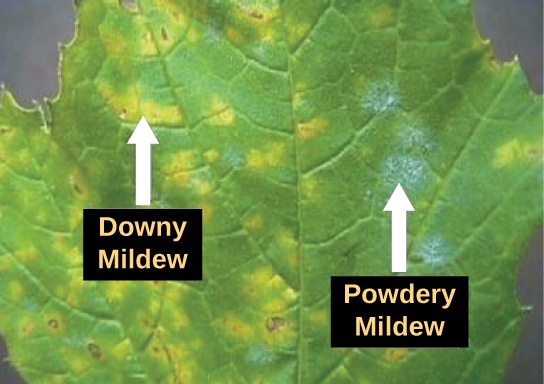 Both downy and powdery mildews on this grape leaf are caused by an infection of P. viticola. (credit: modification of work by USDA)

Phytophthora infestans is an oomycete responsible for potato late blight, which causes potato stalks and stems to decay into black slime (see the figure below). Widespread potato blight caused by P. infestans precipitated the well-known Irish potato famine in the nineteenth century that claimed the lives of approximately 1 million people and led to the emigration of at least 1 million more from Ireland. Late blight continues to plague potato crops in certain parts of the United States and Russia, wiping out as much as 70 percent of crops when no pesticides are applied. 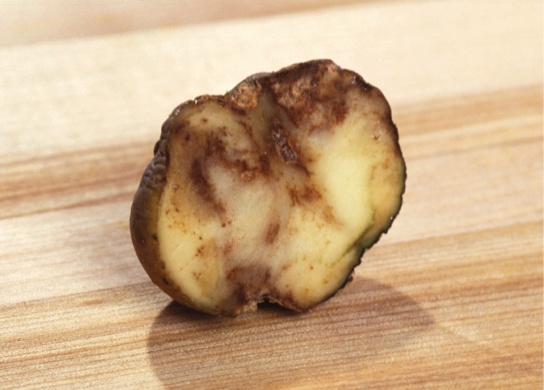 These unappetizing remnants result from an infection with P. infestans, the causative agent of potato late blight. (credit: USDA)

The fungus-like protist saprobes are specialized to absorb nutrients from nonliving organic matter, such as dead organisms or their wastes. For instance, many types of oomycetes grow on dead animals or algae. Saprobic protists have the essential function of returning inorganic nutrients to the soil and water. This process allows for new plant growth, which in turn generates sustenance for other organisms along the food chain. Indeed, without saprobe species, such as protists, fungi, and bacteria, life would cease to exist as all organic carbon became “tied up” in dead organisms.

Protists function at several levels of the ecological food web: as primary producers, as direct food sources, and as decomposers. In addition, many protists are parasites of plants and animals that can cause deadly human diseases or destroy valuable crops.