Protists exhibit many forms of nutrition and may be aerobic or anaerobic. Protists that store energy by photosynthesis belong to a group of photoautotrophs and are characterized by the presence of chloroplasts. Other protists are heterotrophic and consume organic materials (such as other organisms) to obtain nutrition. Amoebas and some other heterotrophic protist species ingest particles by a process called phagocytosis, in which the cell membrane engulfs a food particle and brings it inward, pinching off an intracellular membranous sac, or vesicle, called a food vacuole (see the figure below). The vesicle containing the ingested particle, the phagosome, then fuses with a lysosome containing hydrolytic enzymes to produce a phagolysosome, and the food particle is broken down into small molecules that can diffuse into the cytoplasm and be used in cellular metabolism. Undigested remains ultimately are expelled from the cell via exocytosis. 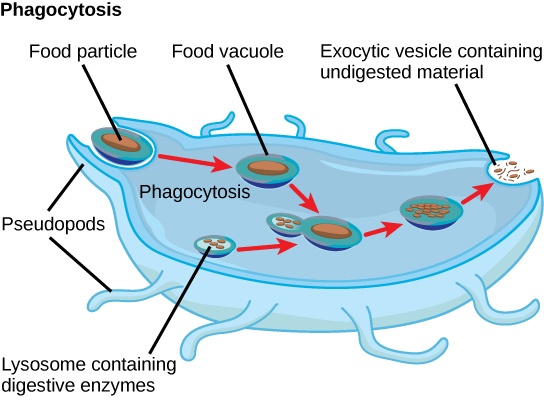 The stages of phagocytosis include the engulfment of a food particle, the digestion of the particle using hydrolytic enzymes contained within a lysosome, and the expulsion of undigested materials from the cell.

Subtypes of heterotrophs, called saprobes, absorb nutrients from dead organisms or their organic wastes. Some protists can function as mixotrophs, obtaining nutrition by photoautotrophic or heterotrophic routes, depending on whether sunlight or organic nutrients are available.