Many of the protist species classified into the supergroup Excavata are asymmetrical, single-celled organisms with a feeding groove “excavated” from one side. This supergroup includes heterotrophic predators, photosynthetic species, and parasites. Its subgroups are the diplomonads, parabasalids, and euglenozoans.

Among the Excavata are the diplomonads, which include the intestinal parasite, Giardia lamblia (see the figure below). Until recently, these protists were believed to lack mitochondria. Mitochondrial remnant organelles, called mitosomes, have since been identified in diplomonads, but these mitosomes are essentially nonfunctional. Diplomonads exist in anaerobic environments and use alternative pathways, such as glycolysis, to generate energy. Each diplomonad cell has two identical nuclei and uses several flagella for locomotion. 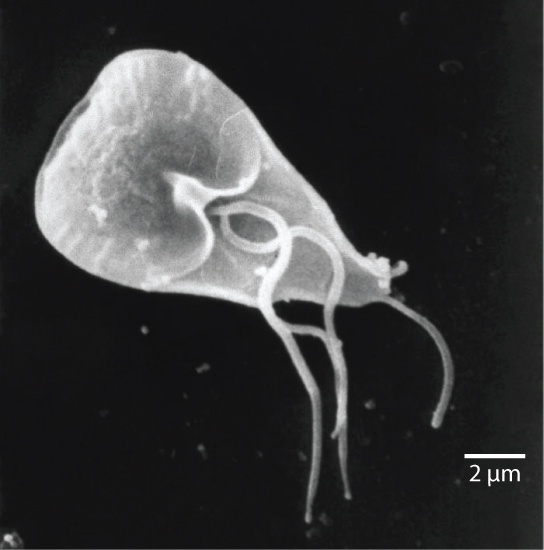 A second Excavata subgroup, the parabasalids, also exhibits semi-functional mitochondria. In parabasalids, these structures function anaerobically and are called hydrogenosomes because they produce hydrogen gas as a byproduct. Parabasalids move with flagella and membrane rippling. Trichomonas vaginalis, a parabasalid that causes a sexually transmitted disease in humans, employs these mechanisms to transit through the male and female urogenital tracts. T. vaginalis causes trichamoniasis, which appears in an estimated 180 million cases worldwide each year. Whereas men rarely exhibit symptoms during an infection with this protist, infected women may become more susceptible to secondary infection with human immunodeficiency virus (HIV) and may be more likely to develop cervical cancer. Pregnant women infected with T. vaginalis are at an increased risk of serious complications, such as pre-term delivery.

Euglenozoans includes parasites, heterotrophs, autotrophs, and mixotrophs, ranging in size from 10 to 500 µm. Euglenoids move through their aquatic habitats using two long flagella that guide them toward light sources sensed by a primitive ocular organ called an eyespot. The familiar genus, Euglena, encompasses some mixotrophic species that display a photosynthetic capability only when light is present. In the dark, the chloroplasts of Euglena shrink up and temporarily cease functioning, and the cells instead take up organic nutrients from their environment.

The human parasite, Trypanosoma brucei, belongs to a different subgroup of Euglenozoa, the kinetoplastids. The kinetoplastid subgroup is named after the kinetoplast, a DNA mass carried within the single, oversized mitochondrion possessed by each of these cells. This subgroup includes several parasites, collectively called trypanosomes, which cause devastating human diseases and infect an insect species during a portion of their life cycle. T. brucei develops in the gut of the tsetse fly after the fly bites an infected human or other mammalian host. The parasite then travels to the insect salivary glands to be transmitted to another human or other mammal when the infected tsetse fly consumes another blood meal. T. brucei is common in central Africa and is the causative agent of African sleeping sickness, a disease associated with severe chronic fatigue, coma, and can be fatal if left untreated. 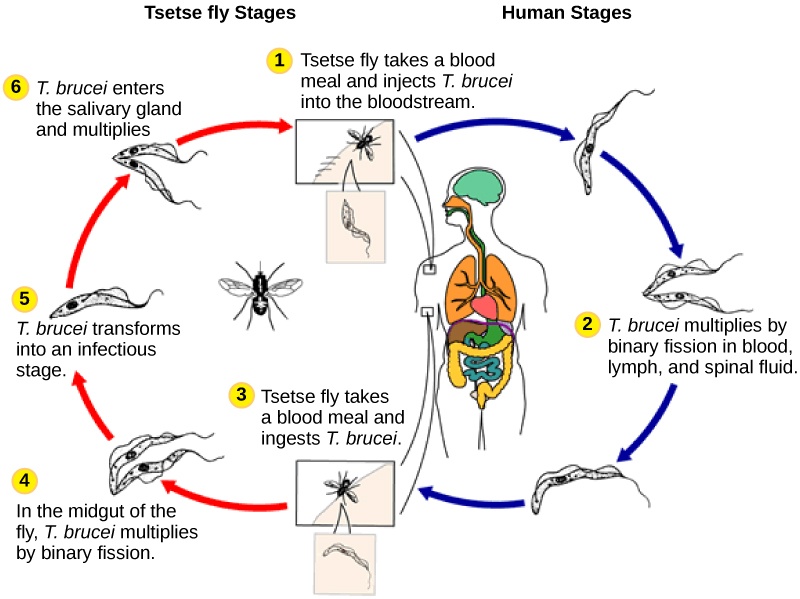 Trypanosoma brucei, the causative agent of sleeping sickness, spends part of its life cycle in the tsetse fly and part in humans. (credit: modification of work by CDC)

Watch the video below to see T. brucei swimming.