A large body of data supports that the alveolates are derived from a shared common ancestor. The alveolates are named for the presence of an alveolus, or membrane-enclosed sac, beneath the cell membrane. The exact function of the alveolus is unknown, but it may be involved in osmoregulation. The alveolates are further categorized into some of the better-known protists: the dinoflagellates, the apicomplexans, and the ciliates.

Dinoflagellates exhibit extensive morphological diversity and can be photosynthetic, heterotrophic, or mixotrophic. Many dinoflagellates are encased in interlocking plates of cellulose. Two perpendicular flagella fit into the grooves between the cellulose plates, with one flagellum extending longitudinally and a second encircling the dinoflagellate (the figure below). Together, the flagella contribute to the characteristic spinning motion of dinoflagellates. These protists exist in freshwater and marine habitats, and are a component of plankton, the typically microscopic organisms that drift through the water and serve as a crucial food source for larger aquatic organisms. 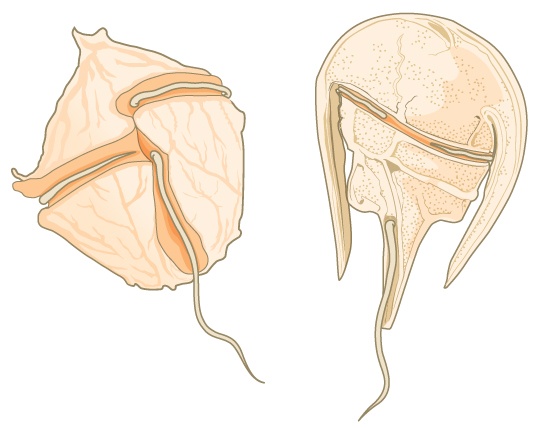 The dinoflagellates exhibit great diversity in shape. Many are encased in cellulose armor and have two flagella that fit in grooves between the plates. Movement of these two perpendicular flagella causes a spinning motion.

Some dinoflagellates generate light, called bioluminescence, when they are jarred or stressed. Large numbers of marine dinoflagellates (billions or trillions of cells per wave) can emit light and cause an entire breaking wave to twinkle or take on a brilliant blue color (see the figure below). For approximately 20 species of marine dinoflagellates, population explosions (also called blooms) during the summer months can tint the ocean with a muddy red color. This phenomenon is called a red tide, and it results from the abundant red pigments present in dinoflagellate plastids. In large quantities, these dinoflagellate species secrete an asphyxiating toxin that can kill fish, birds, and marine mammals. Red tides can be massively detrimental to commercial fisheries, and humans who consume these protists may become poisoned. 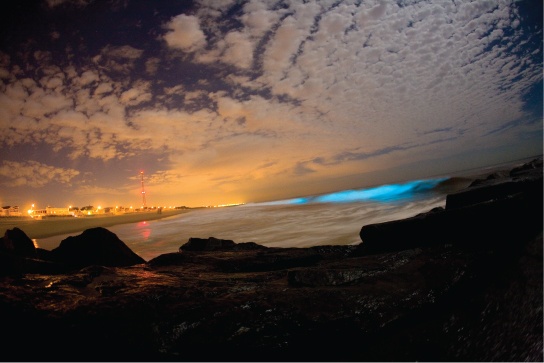 Bioluminescence is emitted from dinoflagellates in a breaking wave, as seen from the New Jersey coast. (credit: “catalano82”/Flickr)

The apicomplexan protists are so named because their microtubules, fibrin, and vacuoles are asymmetrically distributed at one end of the cell in a structure called an apical complex (see the figure below). The apical complex is specialized for entry and infection of host cells. Indeed, all apicomplexans are parasitic. This group includes the genus Plasmodium, which causes malaria in humans. Apicomplexan life cycles are complex, involving multiple hosts and stages of sexual and asexual reproduction.

(a) Apicomplexans are parasitic protists. They have a characteristic apical complex that enables them to infect host cells. (b) Plasmodium, the causative agent of malaria, has a complex life cycle typical of apicomplexans. (credit b: modification of work by CDC)

The ciliates, which include Paramecium and Tetrahymena, are a group of protists 10 to 3,000 micrometers in length that are covered in rows, tufts, or spirals of tiny cilia. By beating their cilia synchronously or in waves, ciliates can coordinate directed movements and ingest food particles. Certain ciliates have fused cilia-based structures that function like paddles, funnels, or fins. Ciliates also are surrounded by a pellicle, providing protection without compromising agility. The genus Paramecium includes protists that have organized their cilia into a plate-like primitive mouth, called an oral groove, which is used to capture and digest bacteria (see the figure below). Food captured in the oral groove enters a food vacuole, where it combines with digestive enzymes. Waste particles are expelled by an exocytic vesicle that fuses at a specific region on the cell membrane, called the anal pore. In addition to a vacuole-based digestive system, Paramecium also uses contractile vacuoles, which are osmoregulatory vesicles that fill with water as it enters the cell by osmosis and then contract to squeeze water from the cell.

You can watch the video of the contractile vacuole of Paramecium expelling water to keep the cell osmotically balanced. 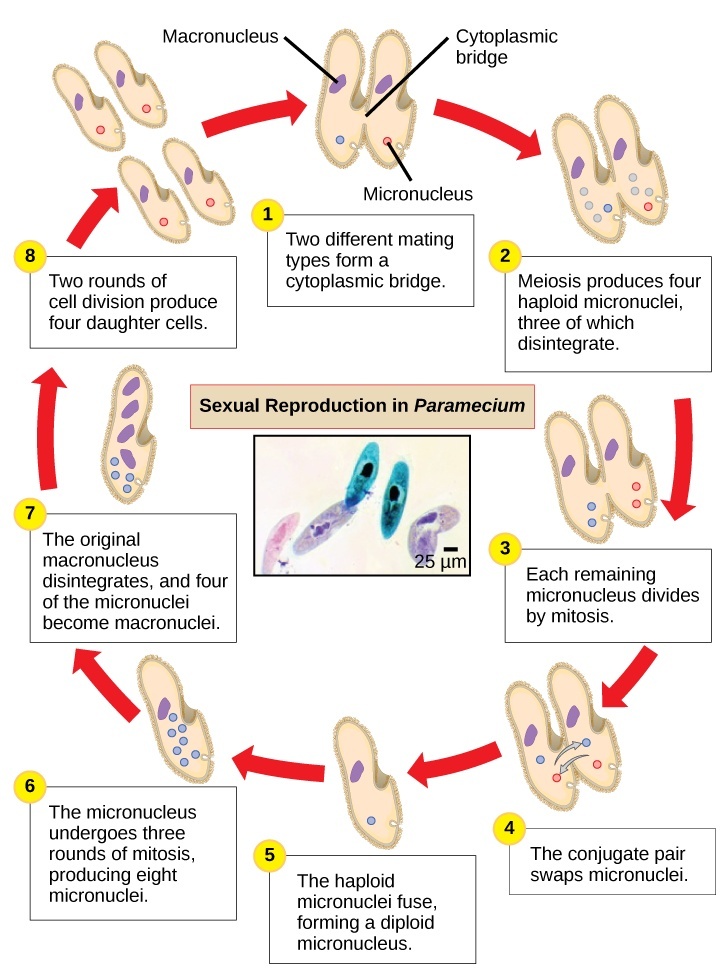 Which of the following statements about Paramecium sexual reproduction is false?

The other subgroup of chromalveolates, the stramenopiles, includes photosynthetic marine algae and heterotrophic protists. The unifying feature of this group is the presence of a textured, or “hairy,” flagellum. Many stramenopiles also have an additional flagellum that lacks hair-like projections (see the figure below). Members of this subgroup range in size from single-celled diatoms to the massive and multicellular kelp. 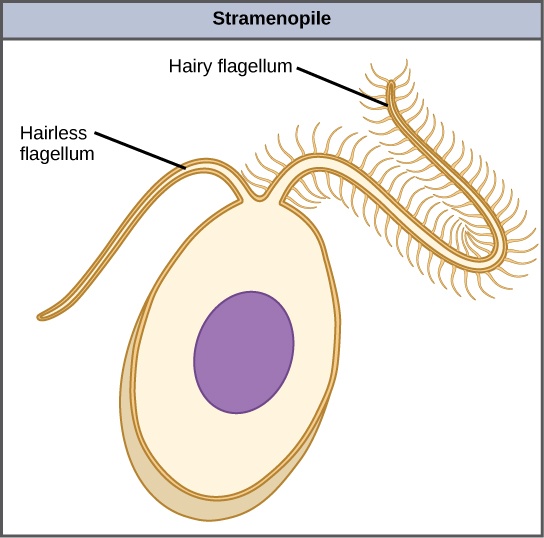 This stramenopile cell has a single hairy flagellum and a secondary smooth flagellum.

The diatoms are unicellular photosynthetic protists that encase themselves in intricately patterned, glassy cell walls composed of silicon dioxide in a matrix of organic particles (see the figure below). These protists are a component of freshwater and marine plankton. Most species of diatoms reproduce asexually, although some instances of sexual reproduction and sporulation also exist. Some diatoms exhibit a slit in their silica shell, called a raphe. By expelling a stream of mucopolysaccharides from the raphe, the diatom can attach to surfaces or propel itself in one direction. 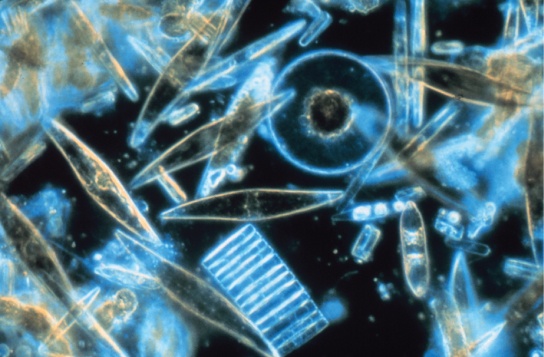 During periods of nutrient availability, diatom populations bloom to numbers greater than can be consumed by aquatic organisms. The excess diatoms die and sink to the sea floor where they are not easily reached by saprobes that feed on dead organisms. As a result, the carbon dioxide that the diatoms had consumed and incorporated into their cells during photosynthesis is not returned to the atmosphere. In general, this process by which carbon is transported deep into the ocean is described as the biological carbon pump, because carbon is “pumped” to the ocean depths where it is inaccessible to the atmosphere as carbon dioxide. The biological carbon pump is a crucial component of the carbon cycle that maintains lower atmospheric carbon dioxide levels.

Like diatoms, golden algae are largely unicellular, although some species can form large colonies. Their characteristic gold color results from their extensive use of carotenoids, a group of photosynthetic pigments that are generally yellow or orange in color. Golden algae are found in both freshwater and marine environments, where they form a major part of the plankton community.

The brown algae are primarily marine, multicellular organisms that are known colloquially as seaweeds. Giant kelps are a type of brown algae. Some brown algae have evolved specialized tissues that resemble terrestrial plants, with root-like holdfasts, stem-like stipes, and leaf-like blades that are capable of photosynthesis. The stipes of giant kelps are enormous, extending in some cases for 60 meters. A variety of algal life cycles exists, but the most complex is alternation of generations, in which both haploid and diploid stages involve multicellularity.

Compare this life cycle to that of humans, for instance. Haploid gametes produced by meiosis (sperm and egg) combine in fertilization to generate a diploid zygote that undergoes many rounds of mitosis to produce a multicellular embryo and then a fetus. However, the individual sperm and egg themselves never become multicellular beings. Terrestrial plants also have evolved alternation of generations. In the brown algae genus Laminaria, haploid spores develop into multicellular gametophytes, which produce haploid gametes that combine to produce diploid organisms that then become multicellular organisms with a different structure from the haploid form (see the figure below). Certain other organisms perform alternation of generations in which both the haploid and diploid forms look the same. 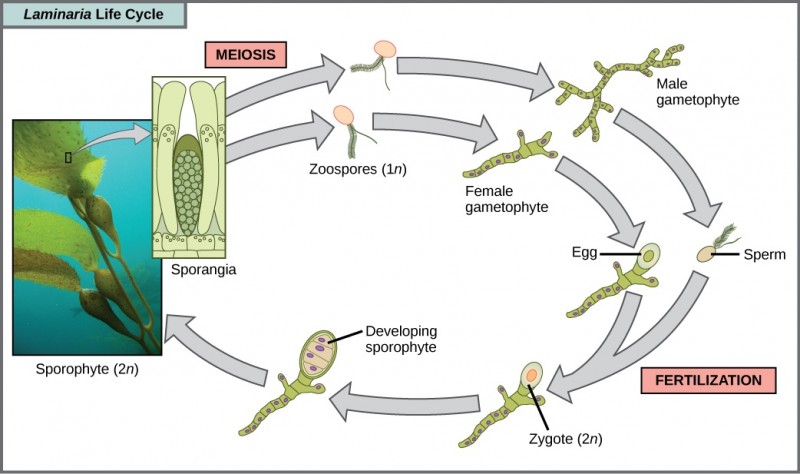 Several species of brown algae, such as the Laminaria shown here, have evolved life cycles in which both the haploid (gametophyte) and diploid (sporophyte) forms are multicellular. The gametophyte is different in structure than the sporophyte. (credit “laminaria photograph”: modification of work by Claire Fackler, CINMS, NOAA Photo Library)

Which of the following statements about the Laminaria life cycle is false?

The gametophyte is diploid.

The water molds, oomycetes (“egg fungus”), were so-named based on their fungus-like morphology, but molecular data have shown that the water molds are not closely related to fungi. The oomycetes are characterized by a cellulose-based cell wall and an extensive network of filaments that allow for nutrient uptake. As diploid spores, many oomycetes have two oppositely directed flagella (one hairy and one smooth) for locomotion. The oomycetes are nonphotosynthetic and include many saprobes and parasites. The saprobes appear as white fluffy growths on dead organisms (see the figure below). Most oomycetes are aquatic, but some parasitize terrestrial plants. One plant pathogen is Phytophthora infestans, the causative agent of late blight of potatoes, such as occurred in the nineteenth century Irish potato famine. 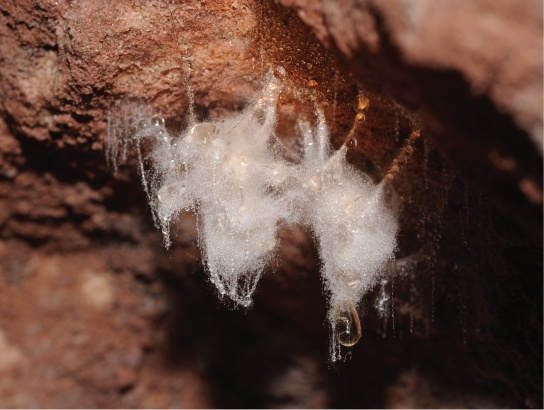