The amoebozoans characteristically exhibit pseudopodia that extend like tubes or flat lobes, rather than the hair-like pseudopodia of rhizarian amoeba (see the figure below). The Amoebozoa include several groups of unicellular amoeba-like organisms that are free-living or parasites. 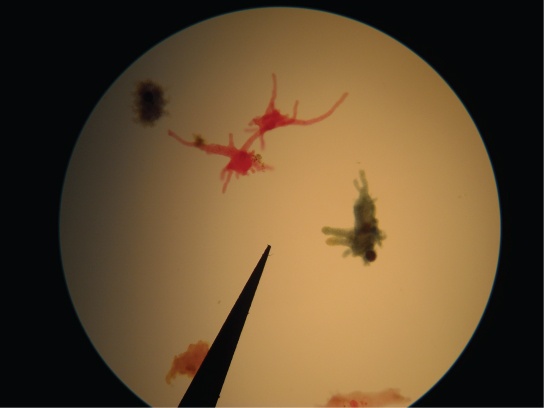 Amoebae with tubular and lobe-shaped pseudopodia are seen under a microscope. These isolates would be morphologically classified as amoebozoans.

A subset of the amoebozoans, the slime molds, has several morphological similarities to fungi that are thought to be the result of convergent evolution. For instance, during times of stress, some slime molds develop into spore-generating fruiting bodies, much like fungi.

The slime molds are categorized on the basis of their life cycles into plasmodial or cellular types. Plasmodial slime molds are composed of large, multinucleate cells and move along surfaces like an amorphous blob of slime during their feeding stage (see the figure below). Food particles are lifted and engulfed into the slime mold as it glides along. Upon maturation, the plasmodium takes on a net-like appearance with the ability to form fruiting bodies, or sporangia, during times of stress. Haploid spores are produced by meiosis within the sporangia, and spores can be disseminated through the air or water to potentially land in more favorable environments. If this occurs, the spores germinate to form ameboid or flagellate haploid cells that can combine with each other and produce a diploid zygotic slime mold to complete the life cycle. 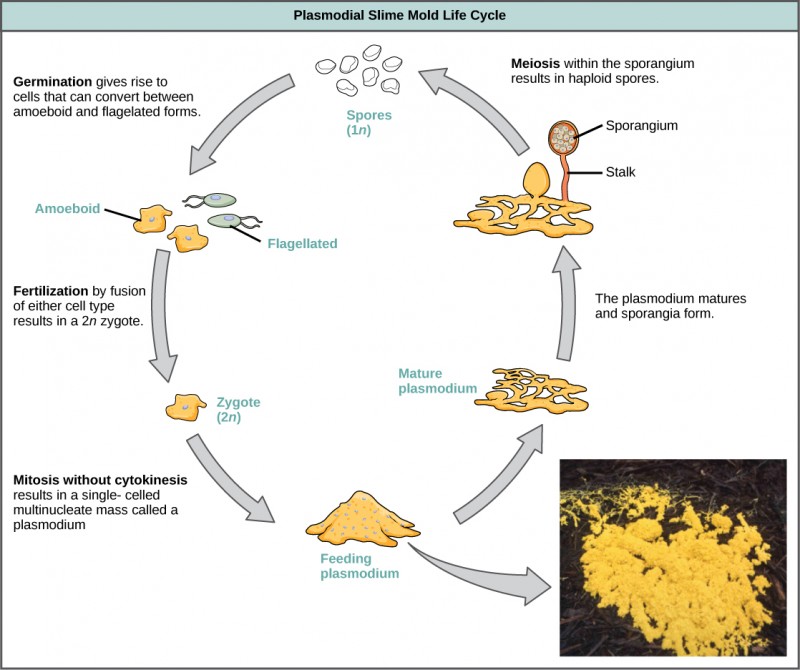 The life cycle of the plasmodial slime mold is shown. The brightly colored plasmodium in the inset photo is a single-celled, multinucleate mass. (credit: modification of work by Dr. Jonatha Gott and the Center for RNA Molecular Biology, Case Western Reserve University)

The cellular slime molds function as independent amoeboid cells when nutrients are abundant (see the figure below). When food is depleted, cellular slime molds pile onto each other into a mass of cells that behaves as a single unit, called a slug. Some cells in the slug contribute to a 2–3-millimeter stalk, drying up and dying in the process. Cells atop the stalk form an asexual fruiting body that contains haploid spores. As with plasmodial slime molds, the spores are disseminated and can germinate if they land in a moist environment. One representative genus of the cellular slime molds is Dictyostelium, which commonly exists in the damp soil of forests. 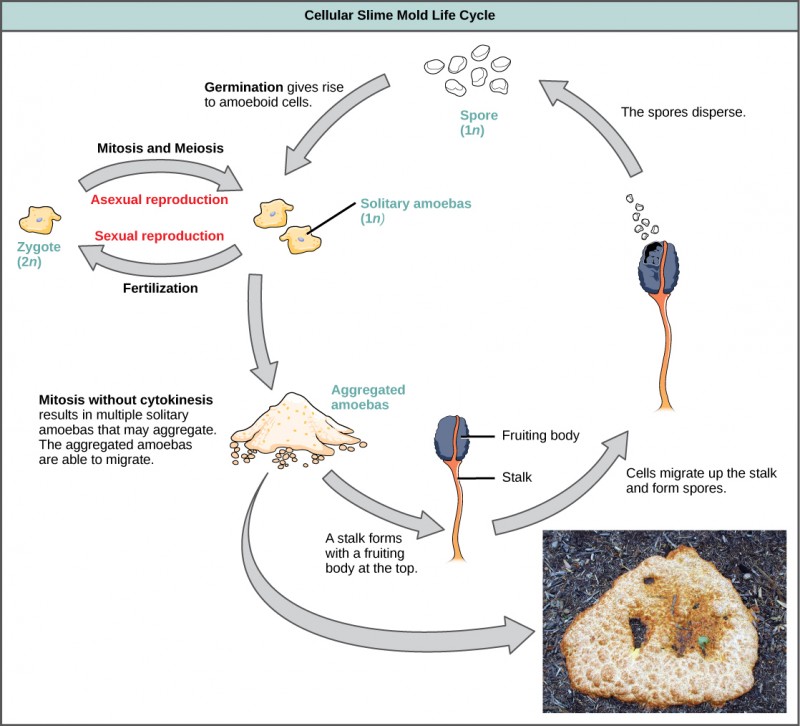 Cellular slime molds may exist as solitary or aggregated amoebas. (credit: modification of work by “thatredhead4”/Flickr)

You can view this video to see the formation of a fruiting body by a cellular slime mold.