Microbes Are Adaptable: Life in Moderate and Extreme Environments

Microbes Are Adaptable: Life in Moderate and Extreme Environments

Some organisms have developed strategies that allow them to survive harsh conditions. Prokaryotes thrive in a vast array of environments: Some grow in conditions that would seem very normal to us, whereas others are able to thrive and grow under conditions that would kill a plant or animal. Almost all prokaryotes have a cell wall, a protective structure that allows them to survive in both hyper- and hypo-osmotic conditions. Some soil bacteria are able to form endospores that resist heat and drought, thereby allowing the organism to survive until favorable conditions recur. These adaptations, along with others, allow bacteria to be the most abundant life form in all terrestrial and aquatic ecosystems.

Other bacteria and archaea are adapted to grow under extreme conditions and are called extremophiles, meaning “lovers of extremes.” Extremophiles have been found in all kinds of environments: the depth of the oceans, hot springs, the Artic and the Antarctic, in very dry places, deep inside Earth, in harsh chemical environments, and in high radiation environments (see the figure below), just to mention a few. These organisms give us a better understanding of prokaryotic diversity and open up the possibility of finding new prokaryotic species that may lead to the discovery of new therapeutic drugs or have industrial applications. 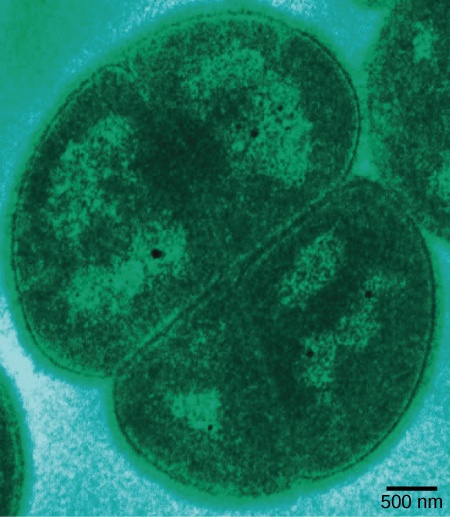 Deinococcus radiodurans, visualized in this false color transmission electron micrograph, is a prokaryote that can tolerate very high doses of ionizing radiation. It has developed DNA repair mechanisms that allow it to reconstruct its chromosome even if it has been broken into hundreds of pieces by radiation or heat. (credit: modification of work by Michael Daly; scale-bar data from Matt Russell)

Because they have specialized adaptations that allow them to live in extreme conditions, many extremophiles cannot survive in moderate environments. There are many different groups of extremophiles: They are identified based on the conditions in which they grow best, and several habitats are extreme in multiple ways. For example, a soda lake is both salty and alkaline, so organisms that live in a soda lake must be both alkaliphiles and halophiles (see the table below). Other extremophiles, like radioresistant organisms, do not prefer an extreme environment (in this case, one with high levels of radiation), but have adapted to survive in it (see the figure above).

Prokaryotes in the Dead Sea

One example of a very harsh environment is the Dead Sea, a hypersaline basin that is located between Jordan and Israel. Hypersaline environments are essentially concentrated seawater. In the Dead Sea, the sodium concentration is 10 times higher than that of seawater, and the water contains high levels of magnesium (about 40 times higher than in seawater) that would be toxic to most living things. Iron, calcium, and magnesium, elements that form divalent ions (Fe2+, Ca2+, and Mg2+), produce what is commonly referred to as “hard” water. Taken together, the high concentration of divalent cations, the acidic pH (6.0), and the intense solar radiation flux make the Dead Sea a unique, and uniquely hostile, ecosystem (see the figure below).

What sort of prokaryotes do we find in the Dead Sea? The extremely salt-tolerant bacterial mats include Halobacterium, Haloferax volcanii (which is found in other locations, not only the Dead Sea), Halorubrum sodomense, and Halobaculum gomorrense, and the archaea Haloarcula marismortui, among others.

Unculturable Prokaryotes and the Viable-but-Non-Culturable State

Microbiologists typically grow prokaryotes in the laboratory using an appropriate culture medium containing all the nutrients needed by the target organism. The medium can be liquid, broth, or solid. After an incubation time at the right temperature, there should be evidence of microbial growth (see the figure below). The process of culturing bacteria is complex and is one of the greatest discoveries of modern science. German physician Robert Koch is credited with discovering the techniques for pure culture, including staining and using growth media. His assistant Julius Petri invented the Petri dish whose use persists in today’s laboratories.

Koch worked primarily with the Mycobacterium tuberculosis bacterium that causes tuberculosis and developed postulates to identify disease-causing organisms that continue to be widely used in the medical community. Koch’s postulates include that an organism can be identified as the cause of disease when it is present in all infected samples and absent in all healthy samples, and it is able to reproduce the infection after being cultured multiple times. Today, cultures remain a primary diagnostic tool in medicine and other areas of molecular biology. 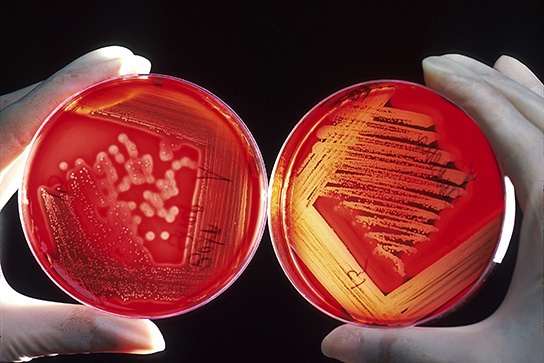 In these agar plates, the growth medium is supplemented with red blood cells. Blood agar becomes transparent in the presence of hemolytic Streptococcus, which destroys red blood cells and is used to diagnose Streptococcus infections. The plate on the left is inoculated with non-hemolytic Staphylococcus (large white colonies), and the plate on the right is inoculated with hemolytic Streptococcus (tiny clear colonies). If you look closely at the right plate, you can see that the agar surrounding the bacteria has turned clear. (credit: Bill Branson, NCI)

Some prokaryotes, however, cannot grow in a laboratory setting. In fact, over 99 percent of bacteria and archaea are unculturable. For the most part, this is due to a lack of knowledge as to what to feed these organisms and how to grow them; they have special requirements for growth that remain unknown to scientists, such as needing specific micronutrients, pH, temperature, pressure, co-factors, or co-metabolites. Some bacteria cannot be cultured because they are obligate intracellular parasites and cannot be grown outside a host cell.

In other cases, culturable organisms become unculturable under stressful conditions, even though the same organism could be cultured previously. Those organisms that cannot be cultured but are not dead are in a viable-but-non-culturable (VBNC) state. The VBNC state occurs when prokaryotes respond to environmental stressors by entering a dormant state that allows their survival. The criteria for entering into the VBNC state are not completely understood. In a process called resuscitation, the prokaryote can go back to “normal” life when environmental conditions improve.

Is the VBNC state an unusual way of living for prokaryotes? In fact, most of the prokaryotes living in the soil or in oceanic waters are non-culturable. It has been said that only a small fraction, perhaps one percent, of prokaryotes can be cultured under laboratory conditions. If these organisms are non-culturable, then how is it known whether they are present and alive? Microbiologists use molecular techniques, such as the polymerase chain reaction (PCR), to amplify selected portions of DNA of prokaryotes, demonstrating their existence. Recall that PCR can make billions of copies of a DNA segment in a process called amplification.