Prokaryotes are everywhere: They readily colonize the surface of any type of material, and food is not an exception. Most of the time, prokaryotes colonize food and food-processing equipment in the form of a biofilm. Outbreaks of bacterial infection related to food consumption are common. A foodborne disease (colloquially called “food poisoning”) is an illness resulting from the consumption the pathogenic bacteria, viruses, or other parasites that contaminate food. Although the United States has one of the safest food supplies in the world, the U.S. Centers for Disease Control and Prevention (CDC) has reported that “76 million people get sick, more than 300,000 are hospitalized, and 5,000 Americans die each year from foodborne illness.”

The characteristics of foodborne illnesses have changed over time. In the past, it was relatively common to hear about sporadic cases of botulism, the potentially fatal disease produced by a toxin from the anaerobic bacterium Clostridium botulinum. Some of the most common sources for this bacterium were non-acidic canned foods, homemade pickles, and processed meat and sausages. The can, jar, or package created a suitable anaerobic environment where Clostridium could grow. Proper sterilization and canning procedures have reduced the incidence of this disease.

While people may tend to think of foodborne illnesses as associated with animal-based foods, most cases are now linked to produce. There have been serious, produce-related outbreaks associated with raw spinach in the United States and with vegetable sprouts in Germany, and these types of outbreaks have become more common. The raw spinach outbreak in 2006 was produced by the bacterium E. coli serotype O157:H7. A serotype is a strain of bacteria that carries a set of similar antigens on its cell surface, and there are often many different serotypes of a bacterial species. Most E. coli are not particularly dangerous to humans, but serotype O157:H7 can cause bloody diarrhea and is potentially fatal.

All types of food can potentially be contaminated with bacteria. Recent outbreaks of Salmonella reported by the CDC occurred in foods as diverse as peanut butter, alfalfa sprouts, and eggs. A deadly outbreak in Germany in 2010 was caused by E. coli contamination of vegetable sprouts (see the figure below). The strain that caused the outbreak was found to be a new serotype not previously involved in other outbreaks, which indicates that E. coli is continuously evolving.

(a) Vegetable sprouts grown at an organic farm were the cause of an (b) E. coli outbreak that killed 32 people and sickened 3,800 in Germany in 2011. The strain responsible, E. coli O104:H4, produces Shiga toxin, a substance that inhibits protein synthesis in the host cell. The toxin (c) destroys red blood cells resulting in bloody diarrhea. Deformed red blood cells clog the capillaries of the kidney, which can lead to kidney failure, as happened to 845 patients in the 2011 outbreak. Kidney failure is usually reversible, but some patients experience kidney problems years later. (credit c: NIDDK, NIH)

Epidemiologists collect data about a particular disease and track its spread to identify the original mode of transmission. They sometimes work in close collaboration with historians to try to understand the way a disease evolved geographically and over time, tracking the natural history of pathogens. They gather information from clinical records, patient interviews, surveillance, and any other available means. That information is used to develop strategies, such as vaccinations (see the figure below), and design public health policies to reduce the incidence of a disease or to prevent its spread. Epidemiologists also conduct rapid investigations in case of an outbreak to recommend immediate measures to control it.

An epidemiologist has a bachelor’s degree, plus a master’s degree in public health (MPH). Many epidemiologists are also physicians (and have an M.D.), or they have a Ph.D. in an associated field, such as biology or microbiology. 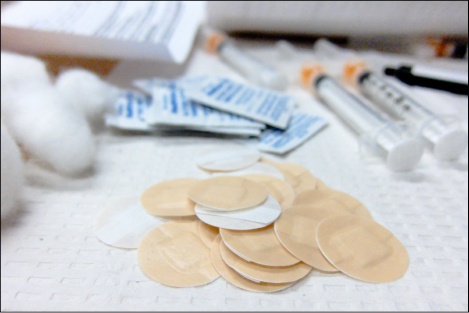 Vaccinations can slow the spread of communicable diseases. (credit: modification of work by Daniel Paquet)